This review was originally posted on Loaded Couch Potatoes in 2009. 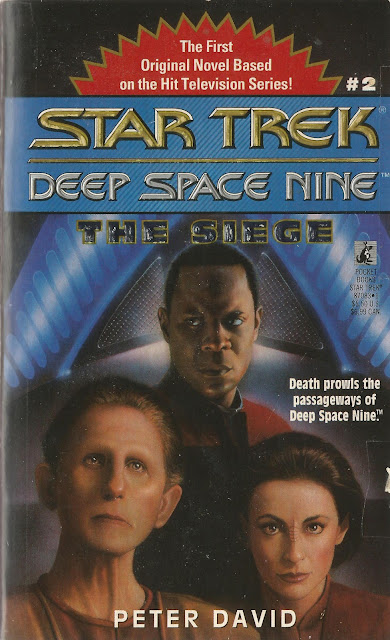 Here’s a bit of analysis of the first original Star Trek: Deep Space Nine novel, 1993’s The Siege, by Peter David.  This, of course, is not to be confused with the second-season episode of the same name.  Doesn't it seem like somebody ought to have said, "Hey, there's a DS9 book with that title already, y'all.  Gimme something different"?

The story deals with the station having to cease activity with the wormhole due to technobabble reasons, and also having to deal with a serial killer who has set up shop on the station and is claiming victims with no apparent rhyme or reason.  All of this leads to Odo discovering a link — pun intended — to his mysterious past.

This novel was written by David with nothing but several screenplays for the first season of DS9 to go on, and it shows, as the end result in many ways bears little resemblance to the series as we know it today.
However, as with Diane Carey’s Star Trek: The Next Generation novel Ghost Ship and (to a lesser extent) Smith/Rusch’s Star Trek: Voyager novel The Escape, this is an enjoyable novel that offers a tantalizing look at some of the directions the series could have taken, but ultimately didn’t.
Points of interest:

All in all, this is another moderately entertaining example of something that amounts almost to an alternate-universe version of a Trek series.  You will either roll with that and have a decent time, or you’ll be too distracted by the differences between novel and series to get much out of it.
by Bryant Burnette at 1:57 AM