I wrote for a blog called Loaded Couch Potatoes for several months in 2009, and today, I'd like to begin to repost some of the articles and reviews that I initially put up there.  We'll start with this, a review of Star Trek: Countdown (the official comic-book prequel to the J.J. Abrams reboot movie). 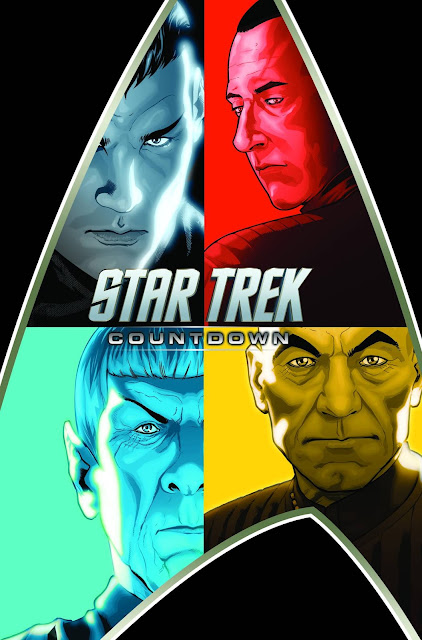 The Star Trek universe is a complicated — some would say overcomplicated — tapestry that includes 28 full seasons worth of television (plus two brief seasons of animation) and eleven feature films, the latest of which will be hitting cinemas on May 8. If you wanted to catch up on all of it, you would have to spend a year doing so, and that’s if you were really, really devoted.  And that doesn’t factor in the thousands of Trek stories that have appeared as original novels and comic books.
Those print-only Trek stories aren’t considered by most people to be canon (i.e., they “don’t really count,” or “didn’t really happen”); however, the screenwriters of the new J.J. Abrams-directed feature film aren’t necessarily most people.


In Star Trek: Countdown, those screenwriters, Robert Orci and Alex Kurtzman, have (along with Mike Johnson and Tim Jones, who scripted the comics themselves) crafted a story that is not only canon, but may prove to be a vital to understanding the movie itself.  Orci and Kurtzman have been quoted as saying how much they enjoyed reading Trek novels through the years, and how much they wanted to find ways to bring certain elements from some of those novels (such as Spock’s World and Best Destiny) into "official" Trek canon.
Their commitment to print as a vital medium for Trek is solidly reflected in Star Trek: Countdown, which is set in the post-Nemesis era.  Twenty years after Spock took up residence on Romulus to try and bring about a peace between the Federation and the Romulan Empire, the now-elderly Vulcan has had some success, managing to become a legal citizen and the Federation’s ambassador; but the Senate still doesn’t fully trust him.  So when Spock warns the Senate of an impending supernova that threatens not only the Romulan homeworld but the entire Empire, they choose not to heed his advice.  (I guess they’ve never seen Superman.) 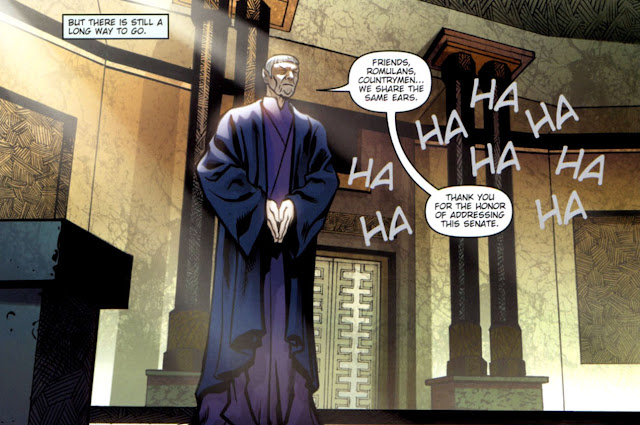 Spock is believed by Nero, a Mining Guild representative who looks suspiciously like Eric Bana and who has seen the supernova in action firsthand.  Nero leaves his pregnant wife behind and joins Spock in an effort to fix the problem without waiting for any governmental approval.
(From here on out, I deal with spoilers that are best avoided for those of you who have not yet read the comics.)
Along the way, the story turns into a loving reunion of several characters from The Next Generation.  Picard is now the Federation ambassador to Vulcan; Data is not only alive (which, given Star Trek: Nemesis, was hardly a given) but is captain of the Enterprise; Geordi is a designer of experimental ships for Starfleet; and Worf is a general in the Klingon military.
In some respects, the presence of these characters feels forced.  I’d have believed Picard as the ambassador to the Klingon homeworld, or as an admiral who comes to Spock’s aid because of their close connection; using Picard as the ambassador to Vulcan, a world to whom he has no particularly strong connection in previous Trek lore, feels less like an organic addition to the story than like a cheat to get him into the story without regard for logic.  The storylines for both Worf and Geordi, on the other hand, feel completely natural given what we know about those characters.  I have some objections to how Worf is used, but we’ll get into that later on.

You can practically smell Orci and Kurtzman’s desire to resolve certain elements of Nemesis, specifically in regards to Data’s “death.”  It seems likely that had there been further Next Generation films, Data would have been resurrected in some fashion.  No way that character was being totally tossed to the wind.  Alas, no such movies were made, so Orci and Kurtzman have done the next best thing: they’ve advanced that story and made it part of official Trek … well, official Trek lore.  It, too, feels like a bit of a cheat, but in this case, it’s a welcome cheat.
Speaking of Nemesis, the series doesn’t shy away from that franchise-killing box-office disaster.  Far from it.  No, artist David Messina has included some specific visual call-backs to that film, including a ship of Reman adversaries, one of whom looks suspiciously like Ron Perlman.  This is all probably an excellent indication of how the new film will be treating existing Trek canon: not only does it not contradict established canon, it pays respect to it, and even tries to make some of it that didn’t work work better! 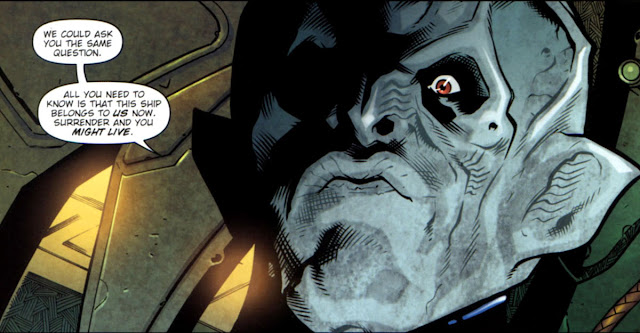 However, the story certainly veers into its own areas, in which it is brazenly unafraid to take over the canonical reigns and chart its own new courses.  Much of this will be reflected in the new film, and it is in these areas that Countdown and the film become inextricably intertwined.
As we all know, Nero is the film’s chief adversary.  I don’t quite want to say “villain,” although I suspect that he is going to be aiming to do some extremely villainous deeds, because in Countdown, Romulus does not survive; it is consumed by the supernova, and is destroyed utterly, along with Nero’s wife and unborn son.  He blames, not entirely without cause, both Vulcan and the Federation for this disaster, and armed with a Borg-enhanced warship given him by what remains of the Romulan military, he appears determined to exact his revenge upon both cultures.
One of the big questions surrounding the film relates to the writers’ assertions that the movie isn’t really a reboot.  What does that mean?  We get the answer in Countdown: in order to halt the advance of the supernova, which threatens the entire galaxy, Spock uses a ship designed by Geordi LaForge to create an artifical singularity to swallow the supernova.  Nero appears on the scene to confront him, and both ships are pulled inside the resultant black hole.
From there, it would seem (although the comics do not follow the story past that point) that they travel both back in time and into a different universe.  Leaving aside the incredulity engendered by the artificial black hole and by the notion that one could travel through one to anywhere and survive, this is an elegant solution.  It is a plot development which grows out of character development (Spock’s, and Nero’s), and allows an entirely new Star Trek universe to be created and played about in without any need to do away with the already-existing universe.  Fans and filmmakers alike get to truly have their cake and eat it, too.  And who knows, maybe the science of that black hole time travel business is more solid than it seems like to me.
All in all, this is a highly enjoyable series, and one that I’d get very close to describing as a must-read not only for Trekkies (none of that "Trekkers" nonsense for me, thankyouverymuch), but also for anybody who plans to see the new film.
I’ve got one major complaint, however, and that lies in the use of Worf.  He gets run through by Nero!  On a weird Borg-enhanced spike!  Now, don’t fret too much, he appears to still be alive when the comics end … but I have problems with Worf getting bested in that manner.  It feels a bit too much like an attempt to make Nero a formidable foe for the new crew in the film.  Well, he was already that, and will presumably be made more so by the film itself; was there really a need to have one of the most beloved of all Trek characters get chumped by him?  Methinks not.  This is a fannish complaint, but I’m sticking by it.
All things considered, however, Countdown is both a strong lead-in to the film, and a strong piece of official Trek history on its own merits.
May 8 can’t get here quickly enough.
by Bryant Burnette at 4:00 PM