Over on the message board for the Tuscaloosa Science Fiction society, I recently responded to a post about the more emotional Spock hinted at in bits of Zachary Quinto’s performance from trailers for the new Star Trek. 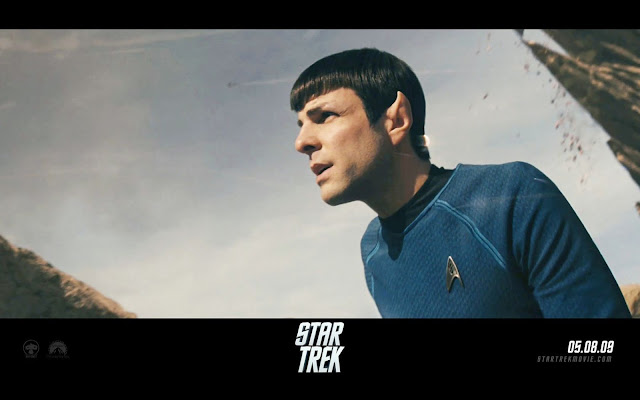 The quote that got my attention was this one: “The trailers have already shown that the movie  has thrown both canon and fanon out the window. The young Spock would be more uptight, not less so, than in later years. The counter argument, that he so vigorously repressed his human side when we first saw him in the original series because he had acted out at Starfleet, to his own embarrassment, is, frankly, absurd.”
For fans like myself, this type of thing is always worth talking about, so I thought I’d re-post my reply here.  It is as follows:


I don’t agree that Spock being emotional is “absurd” in relation to canon.  There is plenty of evidence to suggest that he is capable of emotional outbursts.
In “The Menagerie” — a repurposing of footage from the rejected pilot, “The Cage” — you see Spock on an alien planet, smiling when he is charmed by a singing flower.  Now, sure, “The Cage” was shot before Roddenberry had fully developed the idea of who Spock is and what his character is like, but if “canon” means “everything in the episodes and movies,” then that moment is canon, and is therefore part of Spock’s character.  It’s worth pointing out that canonically, this would have taken place when Spock was a relatively young officer.

Furthermore, there is the moment in “Amok Time” when Spock learns that Kirk is not, in fact, dead and he responds by more or less jumping with joy.  That moment cannot be disputed as offering evidence of an emotional Spock; even if you wish to reject "The Cage" as canon, "Amok Time" cannot be similarly rejected.

In at least three of the feature films, Spock shows distinct emotion.  In The Motion Picture, he weeps in sympathy with V’Ger; in The Final Frontier he expresses anger with a Klingon ambassador who is refusing to help Kirk; and in The Undiscovered Country he is visibly shaken by having to forcibly mind-meld with Valeris.
Now obviously, those are isolated incidents, and the bulk of Spock’s character represents cool, dispassionate logic … but the moments exist.  They’re right there for all to see.  At some point, it is also revealed that Vulcans are not free of emotion; they simply repress and control their emotions.
With all that in mind, why would it seem “absurd” for Spock to be comparatively hyper-emotional in the new movie?  I don’t see anything whatsoever in that concept that is out of step with established Star Trek canon.  It’s also entirely possible that these scenes might, within the context of the new movie, make perfect sense.
Star Trek canon, of course, is a rough, unwieldy beast.  For example, following the “everything filmed” rule I expressed above means that I have to accept the ridiculous notion of Spock’s brother Sybok, along with the rest of the execrable Star Trek V: The Final Frontier.  That film expects me to believe that it’s possible to travel to the center of the galaxy in what appears to be about five minutes.
Compare that to The Next Generation, Deep Space Nine, and Voyager, which make the claim that to travel to any one of the other three quadrants of the galaxy would be a decades-long journey.  Since the center of the galaxy would lie in all four quadrants at their inner corners, it would take decades to reach the center of the galaxy from any point in the Federation.
Since all of this is canon, what am I supposed to accept as The Truth as it relates to the Trekverse?  Celarly, I’m going to go with the truth as established by the later series, not only because they are (mostly) good whereas The Final Frontier is not, but because it’s better storytelling.  It also just plain makes more sense.
There are other such thorny issues in Trek canon, and J.J. Abrams — a damn fine storyteller — has made the wise decision to locate this new movie in a parallel universe, allowing him to simply rewrite and/or sidestep such issues whenever he sees fit.  Since this also allows established Trek canon to continue to exist over in its own universe, it’s an elegant solution.
As a life-long fan of this franchise, I simply cannot understand why so many fans are up in arms over this movie.  For one thing, it does nothing to actually tread on the beloved series and films of the past.  For another, since the franchise was essentially dead until Abrams came along and used his clout to attempt to revive it, how can any fan see this as anything other than a blessing?  Would they really rather see no new Star Trek at all so that they don’t have to have their philosophies challenged?
Also, this all proceeds from the assumption that the new film is disrespectful of the previous series and films.  I’m more than willing to assume that it isn’t until I’ve gotten concrete proof to the contrary.  And even if it is, I’m willing to go along with it if I get something valuable in return.  Ultimately, I’ll weigh the pros against the cons once I’ve seen it, and if the pros are chunkier, then I’m going to be pleased.  Even if it’s a complete sack full of crap, it’s got millions of people talking about the franchise again; it’d be worth doing if only for that reason.
The fact is that Star Trek has been in a near-constant state of evolution since even before the first episode aired.  Things change; Star Trek must also change, if it wants to remain relevant.  Not changing with the times is not only inconsistent with the approach Gene Roddenberry took to the series, it is also a recipe for obscurity.  Allowing that to happen would, quite simply, be illogical.
by Bryant Burnette at 12:21 AM