This article was originally posted on Loaded Couch Potatoes in 2009.

Like many geeks, I’ve been thinking a lot about Star Trek lately, wrestling with the new movie … not so much in terms of whether I like it (I do) or even love it (I do), but in terms of where I would rank it in relation to the other films in the series.
Keep reading if you want to know the results of all that expended mental energy.  And let’s face it: you do want to know.  So here goes, worst to best. 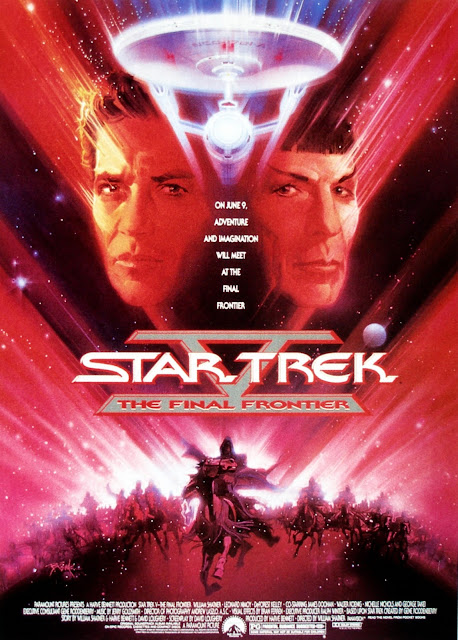 Was there ever any doubt?
Now, just to be clear, this does have one thing going for it: the chemistry between Shatner, Nimoy, and Kelley, which is terrific and was no doubt aided tremendously by Shatner’s direction.
Unfortunately, there’s also the rest of the movie.
The worst sin is probably the whole hey-didja-know-Spock-has-a-brother-he's-never-told-anyone-about? angle.  Oh, give me a fucking break, people.  What is this, General Hospital?  Sybok was a terrible idea for a character, and the only thing that keeps it from being as bad on screen as it is on paper is the fact that the actor playing the role is fairly good.  Terrible idea, though.
Nearly as terrible: the way this movie uses certain other crew members.  Scotty, all of a sudden, is a doofus, and Uhura’s fan dance on the sands of Nimbus III is as embarrassing a scene as has ever appeared in a big-budget film.  Poor Sulu and Chekov get lost in the woods, so that jokes can be made about their navigational skills.
I’m not even going to get into the Sha Ka Ree story, which is dumb beyond belief.  When you’re recycling plot elements from “The Way to Eden,” you know you’ve taken a bad creative turn.  And I use the word “creative” only in an ironic sense.
It’s a bad, bad movie. 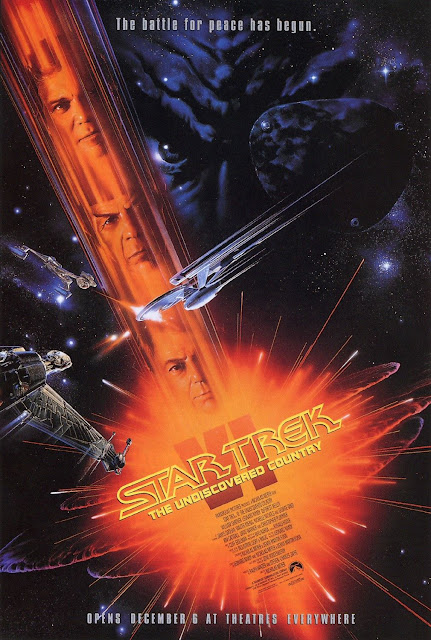 #10 — Star Trek VI: The Undiscovered Country (1991)
In some ways, I’d rather watch The Final Frontier.
I’m well aware that most Trekkies like this movie.  I guess I’m not “most Trekkies.”  My biggest problem with this movie is its near-complete lack of understanding of how the Federation works, philosophically speaking.  You will never in a million years be able to convince me that a plot to keep the Klingon Empire subjugated would or could include high-ranking members of Starfleet.  You will never be able to convince me that a Vulcan would be a member of it.
And you will never convince me that Kirk has hard-core racism within him.  Yes, I know Kirk’s son was killed by Klingons.  His brother was killed by a flying flapjack, or whatever those things in "Operation: Annihilate!" are; you don’t see him advocating that we do away with all pancakes.  Yes, I know that the arc of the movie involves Kirk coming to see the error of his ways on this subject — the fate of the Klingons, not the fate of tasty breakfast foods — but it’s done poorly, and I simply do not believe a second of it, from start to finish.
As a whole, the movie is occasionally entertaining, and Leonard Nimoy (as always) has some fine moments.  But this is a movie that in many ways does not respect its source material at all, and its place of favor amongst Trekkies confuses me. 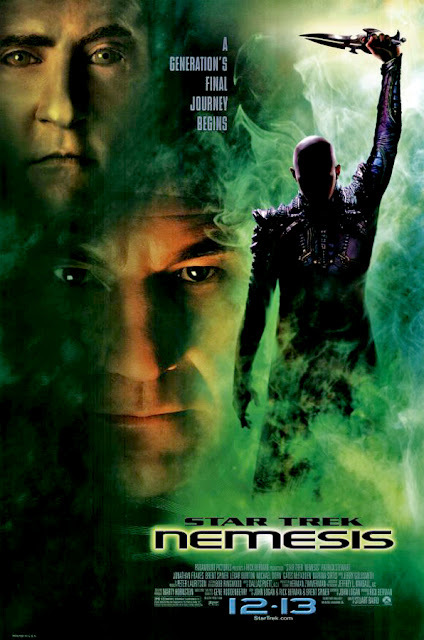 #9 — Star Trek: Nemesis (2002)
It’s a pointless mess.  Killing Data was a bad idea, but it was an even worse idea to kill Data merely so he can return in the form of B4 in the next movie … which never got made, because this one had practically zero fans.
There are some good scenes, and of course, the cast is always great.  I also enjoy the Remans as an addition to the Trek universe.  But the Picard-clone plotline is silly, and poorly executed on top of the silliness; it’s a lame attempt to find a Khan-like adversary, and it does not work.
Another example of the sad waste of the Next Generation crew. 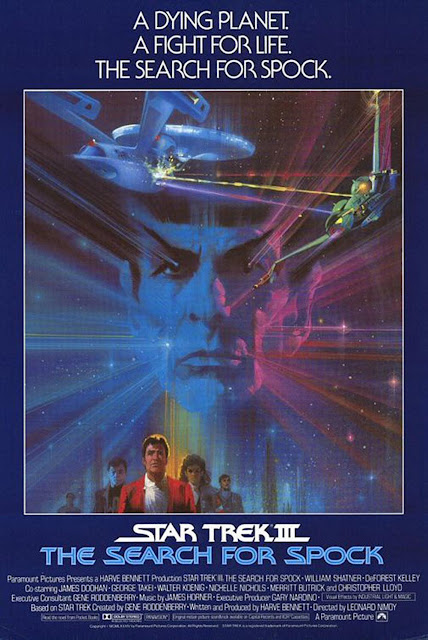 #8 — Star Trek III: The Search for Spock (1984)
My biggest problem with this movie is that it is, essentially, just a big reset button that eliminates most of the previous film’s plot developments.  Spock is dead, huh?  No problem; reset!  Kirk has a son he has to deal with emotionally, huh?  No problem; reset!  An entire planet was created using Federation technology, huh?  No problem; reset!
And so forth.
Look, I see the necessity of bringing back Spock.  I mean, shit, he’s Spock, of course you have to bring him back.  But a perverse part of me would like to have seen a film or two with Kirk and the crew actually dealing with the problems — and the opportunities — given to them in the events of The Wrath of Khan.
Apart from all of those objections, it isn’t a very good movie.  Nimoy directs the original cast pretty well, but otherwise, the movie has pacing problems, it looks cheap, and it’s boring.  Not by any means a high point for the series, it is only saved by the character interactions. 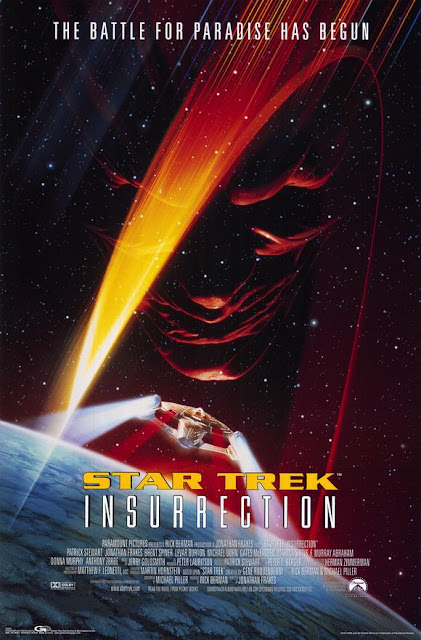 #7 — Star Trek: Insurrection (1998)
This movie was a big disappointment when it was released back in ‘98.  The series was coming off of First Contact, which had been a big hit and had rejuvenated interest in the whole franchise.  So what did they do for a follow-up?  A bland, uninteresting film that would have made only a decent two-part episode of the television series.
This is not the way to reward an audience.  And I think Insurrection had a much bigger hand in the franchise’s collapse than did, say, Nemesis or even Enterprise.  This movie took a lot out of the franchise’s sails, and it didn’t get that wind back until 2009.
Thing is, it’s really not that bad a movie.  It doesn’t all work: there is yet another high-ranking Starfleet conspiracy (one that is partially, though still not plausibly, explained by the Federation’s involvement in Deep Space Nine’s Dominion War); the alien villains, though somewhat creepy and disturbing, are thoroughly unappealing and (worse) uninteresting; and certain plot points (the rejuvenation of the crew members thanks to the planet’s effects) are not quite as clear as they ought to be … but the movie has its moments.
It’s a bad idea for a movie, but it was relatively well-executed.  It plays a bit better now, years later, when you can just watch it and move right along; upon its initial release, when you’d been waiting for it forever, it was a crushing disappointment.  The stink of that will never wash entirely off. 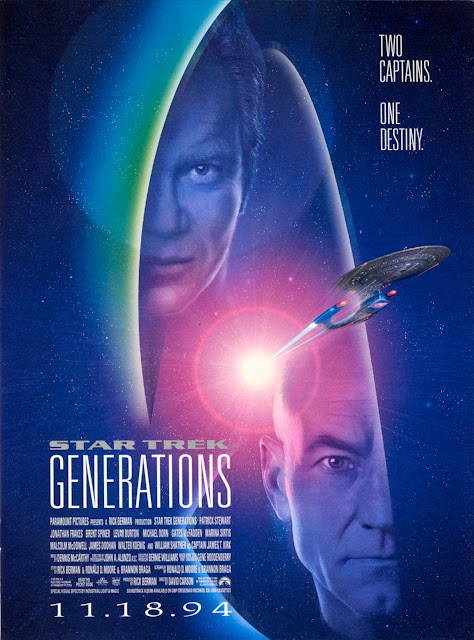 #6 — Star Trek Generations (1994)
I’ve always found this to be an underrated film.  Most fans, though, seem to feel like it's a bit of a piece of crap.
Part of that disrespect is for good reason.  Over time, I’ve lost almost all of the tolerance I once had for the Kirk plotline.  The movie’s opening is simply embarrassing: how can you even consider asking me to accept a Starfleet captain as incompetent as Captain Harriman?  Give me a break.  It’s hard to believe that one of the guys who wrote this later went on to remake Battlestar Galactica and spin gold from poop.
The Nexus is a completely nonsensical plot point, and while it provides a few good character moments for Picard, that’s not enough for me to forgive it.  Worse still, the legendary meeting between Kirk and Picard is just not milked for what it ought to have been worth.  If you’re going to pull a stunt like that, you should pull it for an entire film, not give it a few mild grace notes.
However, the rest of the movie is quite good.  The hour or so in the middle, when the movie is simply doing The Next Generation on the big screen, is vibrant and alive in a way the rest of the movie is not.  The crew makes the leap to feature films with grace and ease, the villains of Soran and the Klingon sisters are effective, and the cinematography is gorgeous.
Watch the movie for that section; the rest is dull at best. 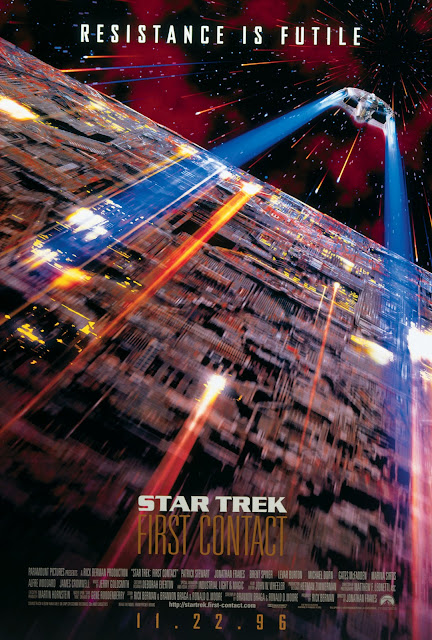 #5 — Star Trek: First Contact (1996)
This one is a great example of what the Next Generation film series could and should have been.  Imagine a film done this well with Q as the antagonist; imagine a Worf-centric Klingon film this good; imagine a Next Gen/DS9 crossover film done as well as this one.  It makes me want to weep a bit.
With First Contact, the producers truly got this crew, and understood what to do with them.  It’s an exciting, funny, and meaningful film that puts a slightly new spin on the old Trek chestnut of the time-travel story.  If only someone had had the sense to know how to follow up on its success... 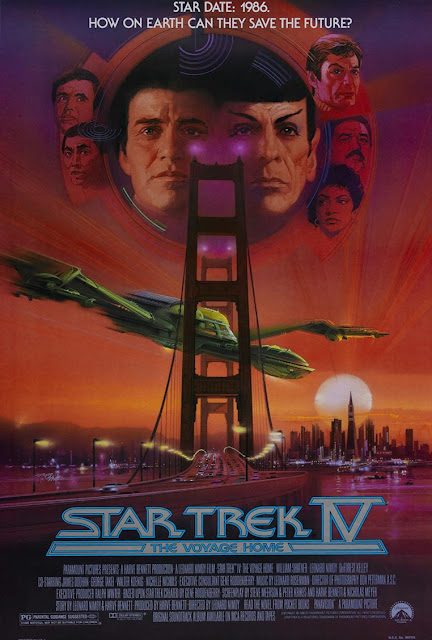 #4 — Star Trek IV: The Voyage Home (1986)
A sparkling piece of entertainment, Nimoy’s second film as a director puts most of the cast to great use (although poor Sulu gets short shrift, as does Uhura).  The film is funny as hell, and the save-the-whales plotline is a return to the social relevance that the franchise has long championed.
One of the things I love about this movie is similar to something I love about The Motion Picture: for all intents and purposes, the story has no villain.  It has a threat which must be reckoned with, yes; but the primary thrust of the movie is one of understanding and coping.  All too often, the Trek movies — even the great ones — forego this type of story in favor of space battles and fistfights.  And that’s fine, but every once in a while, a kinder, gentler Trek is good to see.
Here it is. 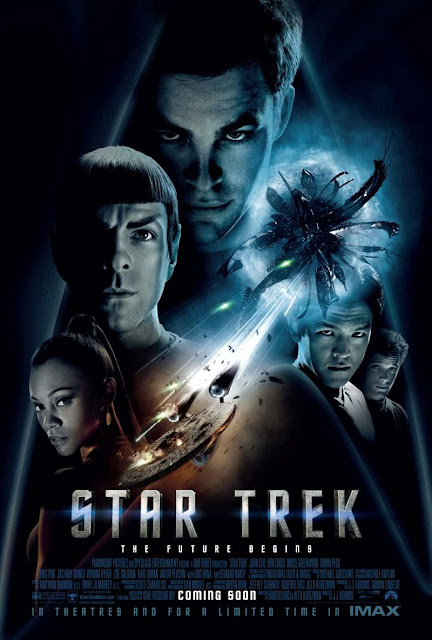 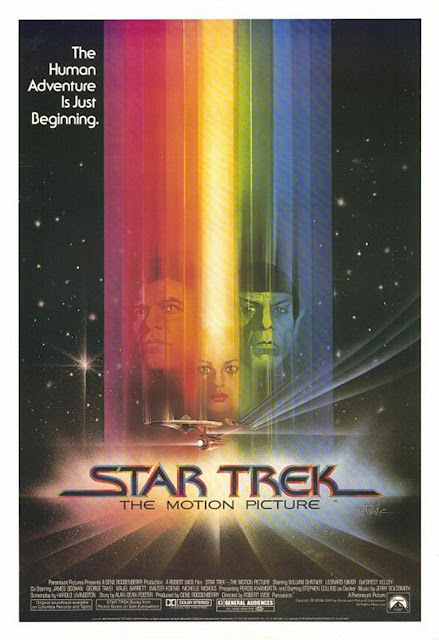 #2 — Star Trek: The Motion Picture (1979)
Ah, how it pains me to put this film at #2.  To this day, it is my personal favorite in the series, but if I’m being objective — and I’m trying here — then I can’t honestly say it’s the best.
But I can honestly say that it’s better than most of them.
Sure, sure, it’s “boring” and “bloated” and “special effects porn,” and has “ugly uniforms.”  Well, okay, I’m with you on that last point.  But I’ve never been bored by this movie in the slightest.  To this day, I find the idea of what V’Ger is to be a provocative, moving, and awe-inspiring notion.  The awe of space exploration has always been a major (if rarely foregrounded) element of Star Trek, and here, in what seems in some ways to be Gene Roddenberry’s master’s thesis, it is front and center in a great way.
Thing is, this is also a film that is entirely about the characters of Kirk and Spock.  The V’Ger story has great relevance to the story of who these two men want to be, and who they actually are.
Oh, and the score is probably one of the best ever written. 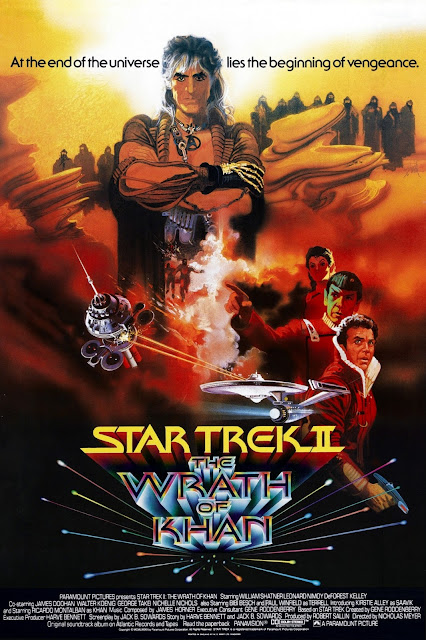 #1 — Star Trek II: The Wrath of Khan (1982)
I think that, for the time being, this one remains the undisputed champion of the series.  There’s a reason why filmmakers have been trying to replicate the formula of this one for years since: because it works really, really well.
Shatner has never been better as Kirk; Nimoy has never been better as Spock.  Ricardo Montalban plays an utterly iconic villain, and one that pays homage to (and deepens) the original series.  These movies have rarely managed to actually do that, which when you think about it, is kinda surprising.
The new additions to the cast — Saavik, Carole Marcus, David Marcus — are credible and interesting (it’s galling that the next film wipes them away utterly).
It is a wonderfully-paced film, with exciting action scenes and moments of great human drama.  It’s not merely a great Star Trek film, it’s a great film in general.
by Bryant Burnette at 10:19 PM