A Review of "Battlestar Galactica: Saga of a Star World"

Here's a review I wrote for a different blog back in 2009:

I’m going to be looking back at each episode of the original Battlestar Galactica [Bryant's note: this did not happen...but will eventually], and I’m going to try very diligently to not mention the much better-executed remake…in fact, I’m going to try very diligently to not even think about the remake.  Comparisons between the two are inevitable, but that seems like a different article altogether; an episode guide isn’t the place for that type of thing.  Instead, for the time being, let’s try and put ourselves back in 1978 and see where things go from there. 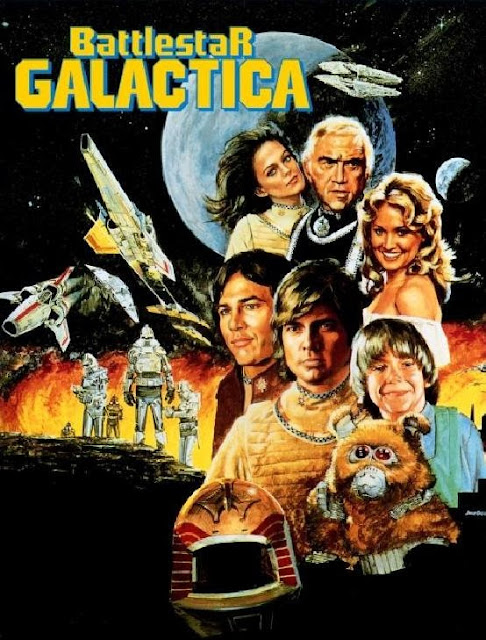 This episode is a good example of a pilot that almost utterly fails to capitalize on a good concept.
If we’re back in 1978, then Star Wars is very fresh in our minds.  It certainly seems to have been on the minds of the producers of this series.  You can practically hear the network executives frothing at the mouth when the pitch for this show came in.  “It’s set in outer space?  And there are WWII-like dogfights in space between fighter pilots and robots?  Can they have swords that are made out of light and cut through things?”  There followed some brief pouting when that last idea was shot down, but negotiations resumed quickly and productively.
But, truth be told, the comparison between Star Wars and Battlestar Galactica is not a particularly fruitful one.  Apart from some design elements being similar (some of them due to the presence of John Dykstra in the credits of both properties), the notion of war as a catalyst for the story, and the willingness of both to reach into mythology for inspiration, there isn’t much in common between the two, or at least not enough for this to feel like a straight-up ripoff, which it has occasionally been accused of being.
That said, I’m sure many people tuned in to the premier on September 17, 1978 simply because it looked a little like Star Wars.  I would guess that younger members of the audience – and if memory serves me well, I was one of them – were probably pleased with what they saw.
There is some significant razzle-dazzle on display here, with a number of space battles that must have looked awfully good for a television show back then.  The Galactica itself was a cool design, with those launch bays and the dramatic red lighting of the command center set.  Starbuck was a good-looking rogue, vaguely reminiscent of one H. Solo from some other space opera whose name I’ve apparently just forgotten.  Later on in the premiere episode, there are weird alien lounge singers, and scary Doctor Whoesque bug-eyed monsters.  Heck, there’s even a robotic dog.
Most importantly, there were also the Cylons.  They have often been referred to as “walking toasters” in the intervening years, and it is absolutely true that in execution, these killer robots are lumbering and unthreatening when they really ought to be sleek, fast, and brutal.  But children would not have noticed any of that.  This might help explain why even thirty-plus years later, I think these Cylons are kinda awesome.  Those mohawk-and-sideburns helmets with scrolling red lights for eyes…?  Awesome.  Those monotone voices…?  Awesome.  Those attack ships, which apparently require three pilots, all of which are well-trained at craning their necks to see passing Vipers…?  Awesome.  And that weird-as-hell Imperious Leader who sounds like Patrick Macnee…?  Awesome as hell, so awesome that he had to sit twenty feet up in the air.  You’ll get little complaint from me about the Cylons.

The screenplay, on the other hand…?  Not awesome.  And the direction doesn’t help it out a bit.
In point of fact, this pilot episode is mostly a tedious affair.  We are told that the Cylons wipe out the twelve colonies of man, but apart from seeing one city strafed by a few Cylon ships, we don’t see how this is actually accomplished, nor are we told much of anything about it.  Hell, we don’t even really see the other Battlestars get wiped out; we certainly don’t get any indication of why the Galactica was able to avoid that fate.  It feels mostly coincidental.  Now, I get that the television landscape in 1978 was a vastly different beast than it is today, so let me admit that it’s unfair to expect a show from that to wallow in such a conceit as the genocide of the human race.  However, this episode doesn’t appear to even try, so points off.  For a bit more counterpoint, I’ll admit that fleshing out a story wouldn’t have been as important back then as would have been establishing a conceit: namely, the conceit of the fleet of ships fleeing toward a new home on the mythical planet of Earth.  And on that score, I guess this episode does okay. 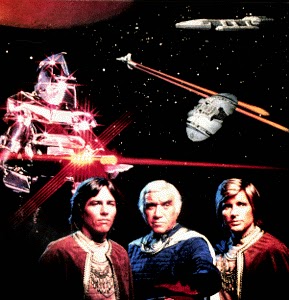 The cast is decent.  Lorne Greene, still a household name in 1978, would have been a major selling point for the series, and sure enough, there he is, it’s Lorne Greene on the bridge of a spaceship.  You’d think he would exude authority.  He doesn’t, exactly, but that’s because the screenplay doesn’t do much to capitalize on having a star of his magnitude in the role.
Richard Hatch plays Adama’s son, Apollo.  He’s okay.  Dirk Benedict plays rakish Starbuck.  He’s okay, too.  Maren Jensen and Laurette Spang play a couple of babes; Jame Seymour plays a third.  They’re all okay (though Jensen is utterly awful in at least one scene).  Terry Cater plays Tigh, Adama’s next-in-command; Herbert Jefferson Jr. plays Boomer, another Viper pilot.  They’re both okay.  Rick Springfield has a small role as Apollo’s brother Zak, who is killed pretty quickly, and if you’re paying attention, you might spot a young Ed Begley Jr. as yet another Viper pilot.  John Colicos is the villainous Baltar; Lew Ayres is the gullible President Adar; and Ray Milland is the slimy Sire Uri.  They give the performances you’d expect from veteran actors who feel as if they’re slumming: they range from competent to disinterested to brazenly hammy.  I’ll leave it to you to decide which is which.
All in all, this is just not a terribly interesting episode.  I could dwell on some of my specific problems, but that would take more time than I’m interested in spending on an essentially mediocre project. 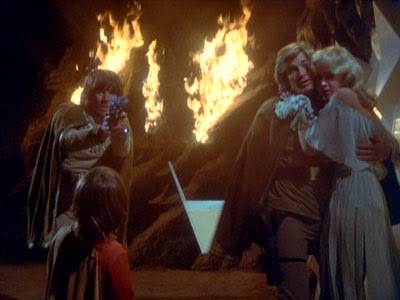