Here is a brief review I wrote of the new Star Trek comic "Strange New Worlds" (the 2013 annual) for one of my other blogs: 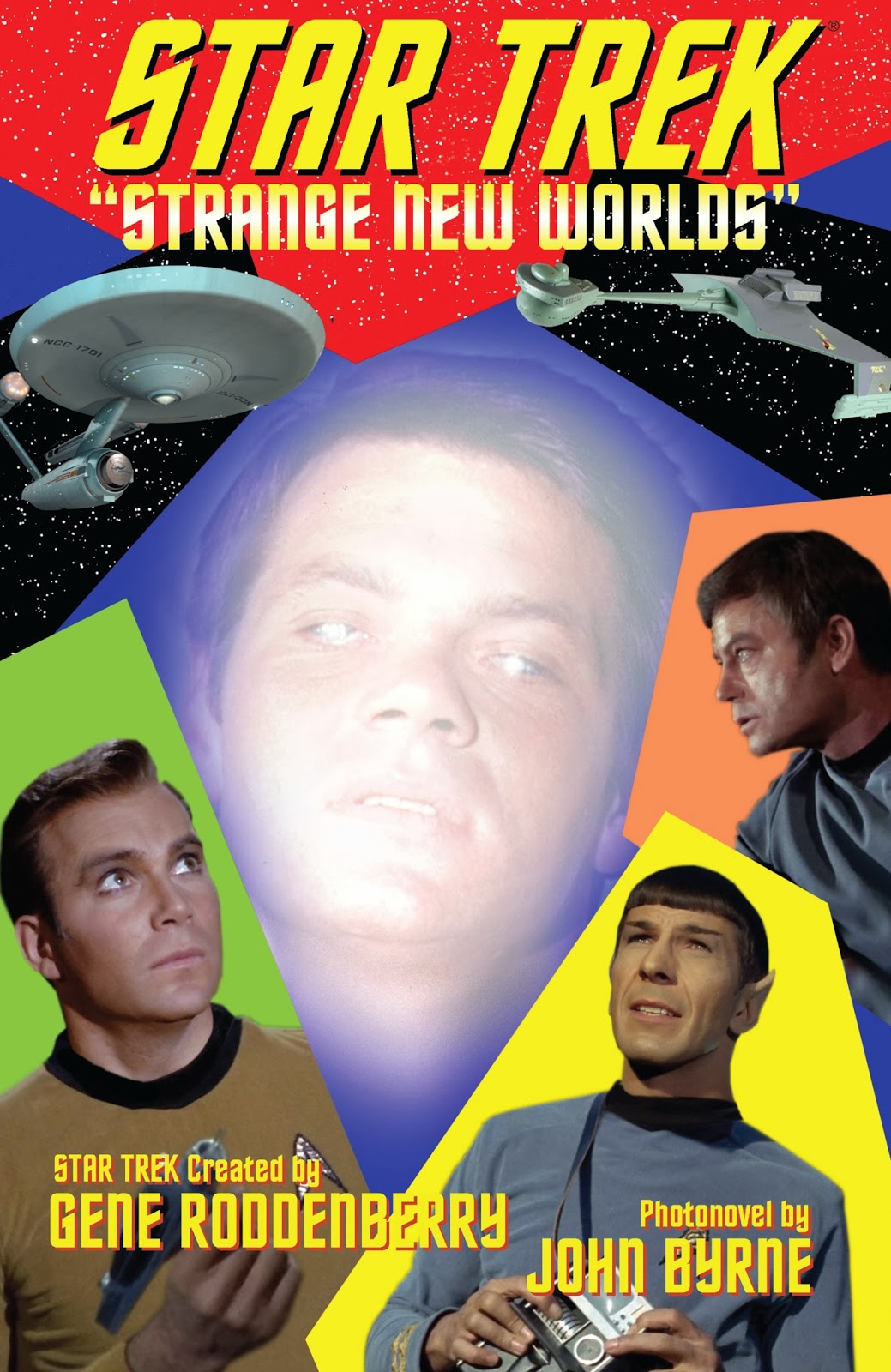 It's a double-sized issue in terms of page count; and also, at $7.99, in terms of price, and while such a high price for a single issue of a comic typically annoys me, in this case it feels like it's worth every penny . . . especially when you consider how much effort must have gone into making it happen.
What we've got here is (as the cover has already told you) a photonovel by John Byrne.  It's a sequel to the first-season pilot episode, "Where No Man Has Gone Before."  Bryan McMillan recommended this issue to me, and it sounded cool, so I picked up a copy while at the comic chop earlier this week.  Bryan's recommendation carries some weight 'round these parts, and this particular recommendation does nothing to diminish that reputation; "Strange New Worlds" is very, very good. In case you don't have a solid grasp on what a photonovel is, conceptually, here are the first few pages: 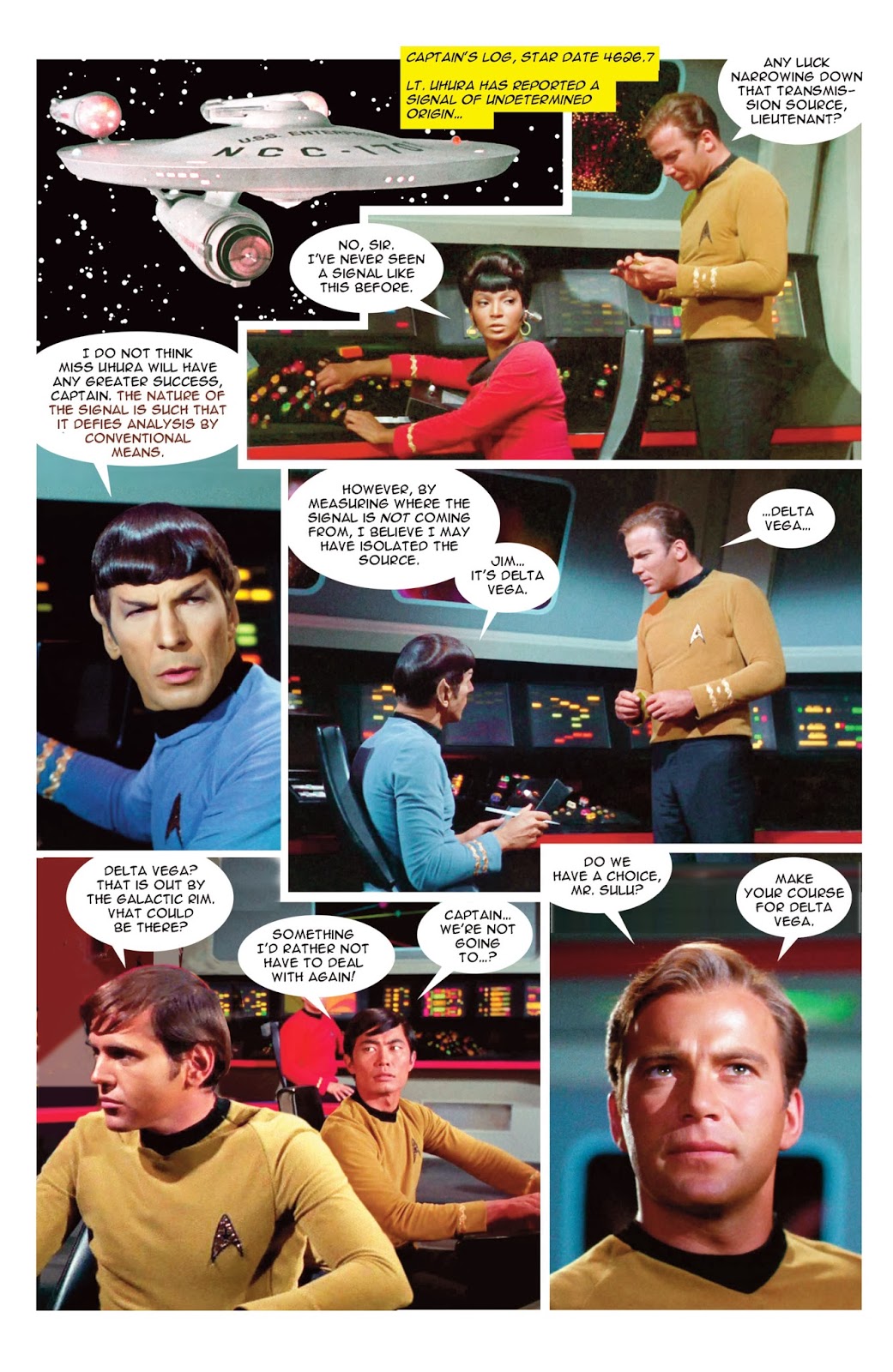 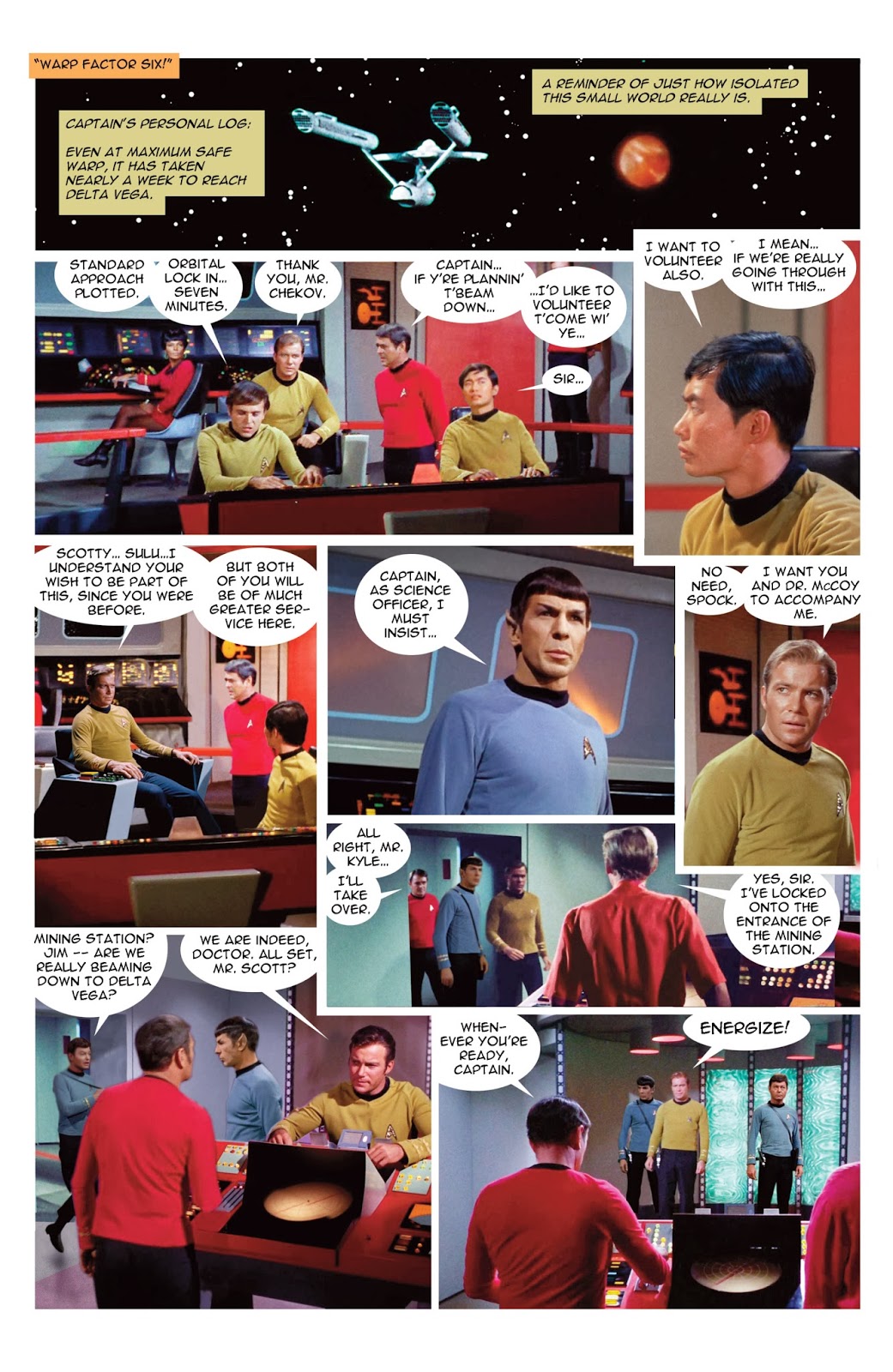 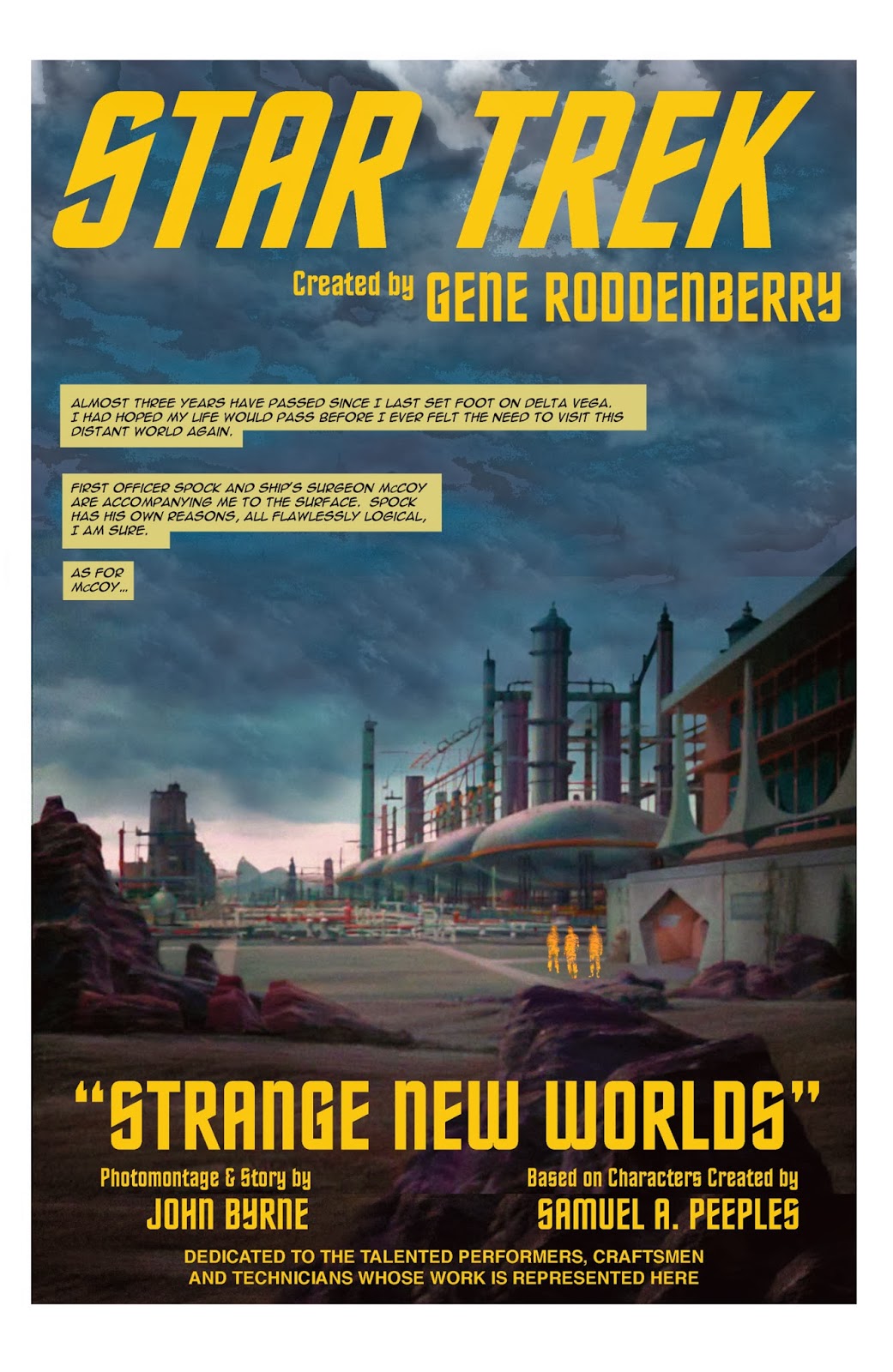 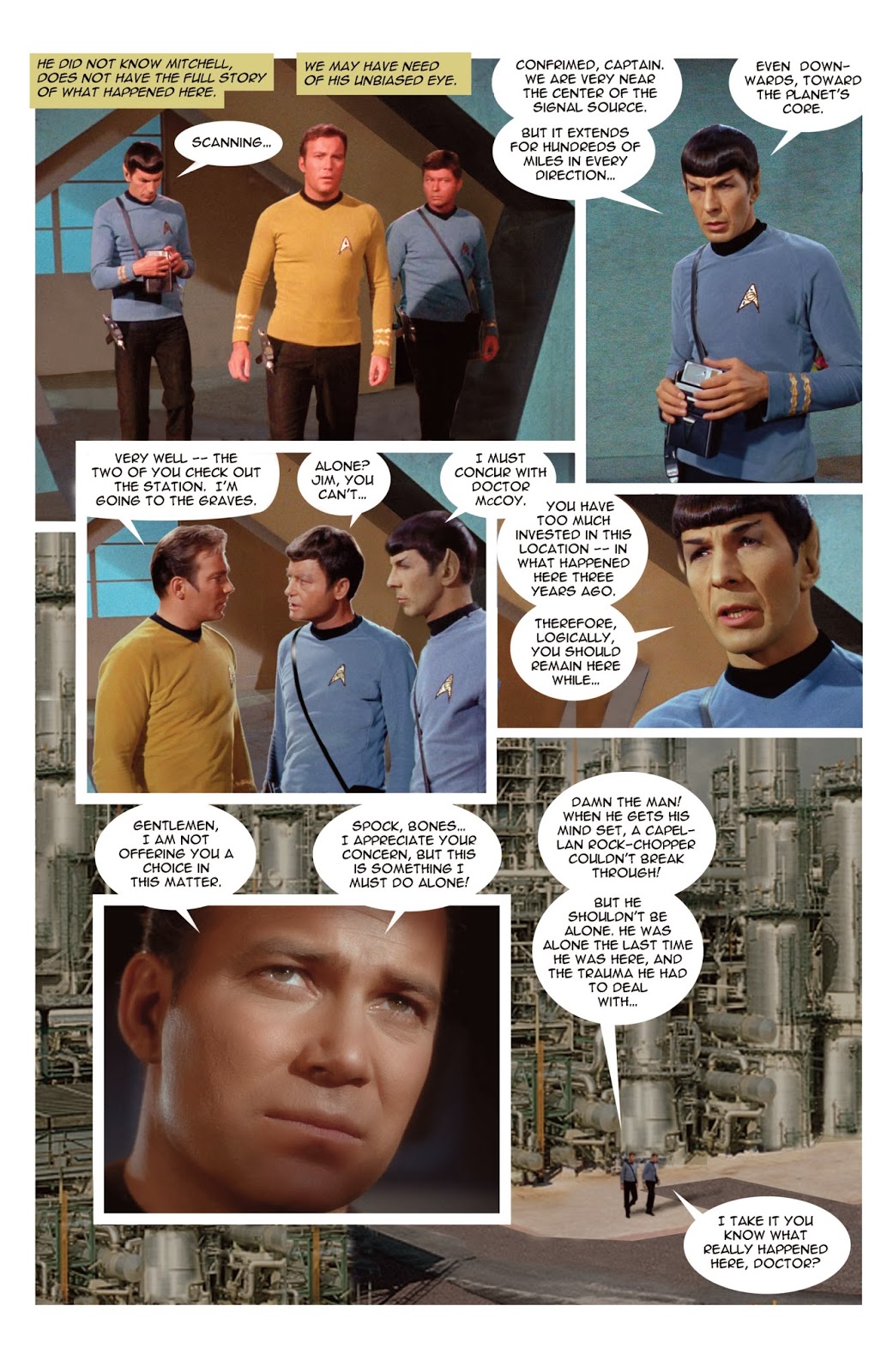 The concept of the photonovel is one that I've been familiar with for decades now, but I don't recall having ever actually encountered one.  I seem to recall seeing a few examples of the Star Trek photonovels (which were part of the Fotonovel brand) from the '70s at some point; and I think I read some comic that worked in that style once, too.  But if so, it failed to make a significant impression upon me.
Not so this time.  Consider me a convert; I thought this was genius.
Byrne, who wrote the script and also designed the art ("art?"?), has taken a huge amount of care with this story.  At first glance, especially to the uninitiated, it might appear to simply be images from the original Star Trek overlaid with new dialogue to create a brand-new "episode."  This isn't that; some of it is that, but only when the image is appropriate and functional.  Otherwise, Byrne's methods were more like manipulation of the original images to achieve the desired effect.  Occasionally, you can sort of see the join (the equivalent of seeing the zipper on the monster costume); but overall, the effect is startlingly effective.
As for the story itself, it seems like something that really could have been an episode during a hypothetical season four of the series.  Just as a recent issue of The X-Files: Season 10 [#8, in case you were wondering] struck me as simply BEING The X-Files (as opposed to a facsimile of it), this issue strikes me as being vintage Star Trek.  Undoubtedly the medium (photonovel) has a lot to do with that; but the story has a lot to do with it, too, and without it succeeding, the issue would have been a failure, no matter how well-done the photonovel aspects were on a technical and conceptual level.
My favorite panel, incidentally, is a cameo that I will not reveal; but it made me grin quite widely.
At the end, Byrne has an afterword which seems to suggest that more such Trek photonovels might be in the offing.  If so, I'm onboard for them.
by Bryant Burnette at 10:42 PM