A Review of "Caprica" (pilot episode)

Here's a review I wrote of the pilot episode to Caprica many years ago.  I first published it at the now-defunct Loaded Couch Potatoes, and resurrect it now for the sake of . . . uh . . . 'cause I want to.
*****


With the much-lauded Battlestar Galactica having reached its end on television screens a few weeks ago, producers Ronald D. Moore and David Eick now unveil the pilot to its prequel series, Caprica.  Hitting DVD a full year before the series is scheduled to begin, can it possibly live up to the high expectations fans have for it? 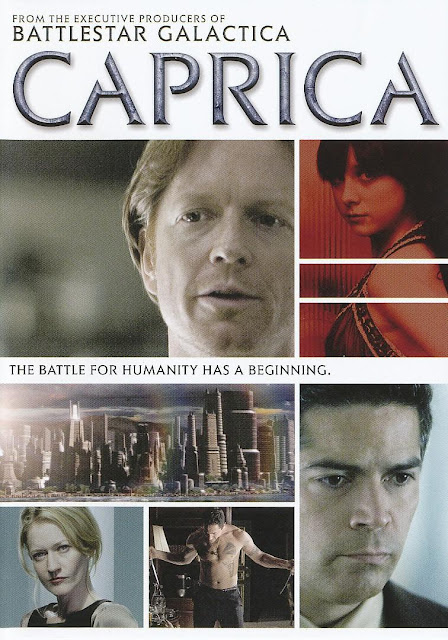 We almost didn’t get a chance to find out.  The concept for the prequel was announced several years ago, but Sci-Fi Channel dragged its feet for months with no firm commitment toward actually making the pilot.  In the end, the WGA strike — and the resultant fears of severe product shortage it engendered — led the channel to give the project a greenlight.  Even then, it was months before they decided to commit to taking the pilot to series.  Now, though, the series is filming, and the pilot is completed and sitting on store shelves; does the end product justify all that behind-the-scenes drama?

It does.  Really, it’s not even close.  Caprica is close to being a genuine triumph.  As with all pilots, its ultimate success will be partly measured by the success or failure of the series it spawns, and we’ll have to wait a while to see how that turns out; but as far as pilots go, this is confident, polished, entertaining, substantial work.  In other words, it’s about what you’d expect from a Battlestar Galactica prequel.
Pilots are tricky business.  They have to establish a concept and a fictional world that are not only satisfying in and of themselves, but they also have to lay the groundwork for years and years of (potential) development to then take place.  The vast majority of pilots — even the ones for series that ultimately succeed — are doomed to crash and burn.
With spinoff series pilots, it’s even trickier.  Not only do you have to do all the things that a pilot is supposed to do, you also have to manage those feats and keep the series somewhat consistent with whatever original series it is being spun off from.  This often leads to a sort of odd disconnect for people who are fans of the original series.  Watch a lot of episodes of Buffy the Vampire Slayer and then watch the pilot to Angel and tell me it doesn’t feel a little bit odd.  Same goes for Star Trek: Deep Space Nine if you’re coming off of watching The Next Generation; same goes for Frasier on the heels of Cheers.  And those are all good series with fairly good pilots.
Well, with Caprica we’re getting not just a spinoff, but a prequel; so not only is it necessary for the filmmakers to do the work of a pilot, they also have to do the work of a spinoff pilot AND structure the show’s conceits in a manner that will be consistent with the already-defined end of the story.  We know what happens to Caprica; this show has to chart its own course, be consistent with Battlestar Galactica, and end the series by arriving (or at least setting up) a pre-defined point.
This cannot be easy work.


Well, if the pilot episode is any indicator, not only have they pulled it off, they’ve done so without incurring any of the disconnect that was apparent with some of those other spinoffs I mentioned.  This, of course, is a highly objective thing, and you might feel the disconnect where I do not.  For me, though, Caprica is on the road to being very, very successful.
Set “58 Years Before the Fall,” Caprica seems to be the story of two families: the Greystones (father Daniel is a genius scientist with military contracts) and the Adamas (father Joseph is a lawyer with mob connections), both of whom lose members during a terrorist bombing.

Daniel’s daughter, Zoe, is killed, and he launches himself into a crazed attempt to resurrect her.  In so doing, he draws Joseph -- whose own daughter and wife were killed in the blast -- into his efforts, talking Joseph into using his mob contacts to steal an important piece of technology from a competitor.  This all leads to the creation of the first Cylon.
There is a lot to like in this pilot.  I’m a big fan of the V Club, an underground virtual environment in the form of a debauched night club.  The V Club is a place where people can go and, in the guise of the avatars of themselves they create, experience pretty much anything: murder, sex, fight clubs, human sacrifice to the death goddess Hecate, and who knows what else.

Zoe, before dying, created an avatar of herself that she programmed with some sort of emotional feedback link and turned into a living, virtual twin of herself.  Now, scientifically, this might seem like a lot to swallow, but the writers do a good job of making it at least somewhat plausible.  And anyways, it’s not scientific plausibility this show is after; it’s philosophical and moral complexity.
Daniel, of course, is a Frankenstein figure here.  The filmmakers and actor Eric Stoltz do nothing to hide that fact; if anything, they embrace it.  And as with some of the finer Frankenstein retellings, we have a great deal of sympathy for what Daniel is doing.  We know it’s wrong, because we know how all this turns out — with lots and lots of nuclear explosions — but because Daniel’s anguish over the loss of his daughter is so palpable, it’s hard to not be sympathetic toward his intentions.  This is also helped by the fact that Zoe, played with a great deal of feeling by Alessandra Torresani, is a very believable character, both as a real person and as a virtual avatar.
Hearing about the concept for this series, you’d expect to actually see the process behind the creation of the first Cylon; you might even expect it to take a season or so to get to that point.  Nope.  Instead, what you get is a situation in which robotic soldiers are already on the drawing-board, but in a state of unworkable imperfection.  The robot turns into a Cylon only when the human element of a soul is added into the mix, thanks to complex motivations such as grief, envy, and guilt.  Now, that’s an extremely interesting spin on the idea of what, philosophically, a Cylon actually is.  It opens up entirely new thoughts about what we saw in Battlestar Galactica, but it does so in the best possible way: it does not at all cheapen or cheat that earlier series.  And with the Cylon version of Zoe we see at the pilot’s end, we’re only at the beginning; the series is likely to be even more illuminating.  This is good stuff.
Also good is the deepening of the cultural differences between the Twelve Colonies.  The pilot, obviously, is set on Caprica, but we learn a lot about Tauron culture here.  They come from a desolate world, free of flowers and prone to hardening people.  Joseph Adama comes from that world, as does his hard-as-nails brother, who is an effective hitman for a prominent Tauron mob lord.  This notion of the stock from which Commander Adama will eventually spring lends even more depth to Battlestar Galactica.  Certain elements of that series, which are entirely satisfying on their own, will likely become somehow even more satisfying the next time I watch those episodes.
There is a great deal of religious content in the pilot.  The terrorist act which kills Zoe is enacted by one of her best friends; both of them are members of a cult in service of “the One True God,” a cult they were led to by their school’s headmistress.  (She is played by Polly Walker, and that connection with the excellent HBO series Rome prompts interesting ideas about Caprica being portrayed in a Rome-before-the-fall allegory.)  Walker’s Sister Clarice is obviously being set up as a major antagonist for the series, and while Walker doesn’t get much to do here, I’d guess that’ll change once the episodes begin airing.
The cast, across the board, is terrific.  Eric Stoltz is believable as Daniel, and Esai Morales brings a tough edge and a yearning to Joseph Adama; I completely buy him as Admiral Adama’s father.  I already mentioned Torresani as Zoe; her friend Lacy, who nearly died in the explosion, is played by Magda Apanowicz, and she is terrific.  Polly Walker is good in her few scenes, as is Paula Malcomson playing Zoe’s mother (she, too, gets little to do in this pilot).

Also immensely effective is Sasha Roiz, playing Adama’s brother Sam, a tattooed killer.  According to the fine commentary track on the DVD, Roiz was so impressive in a guest role here that the producers decided to add him to the regular cast for the series. (This also happened with Tahmoh Penikett on the Galactica pilot.) 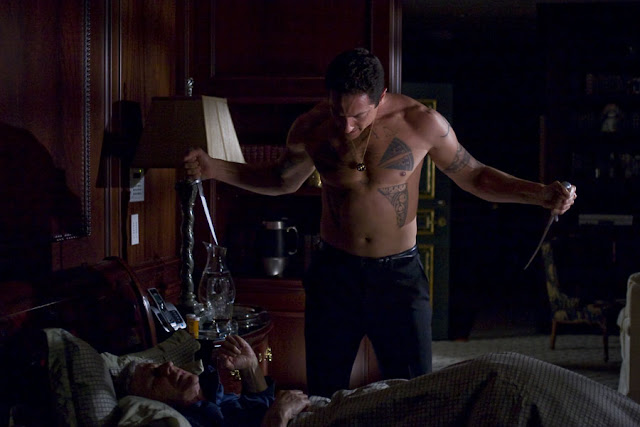 Also great in a tiny role is the Cancer Man himself, William B. Davis, whose presence would seem to promise that his character would recur throughout the series.  Not so; he gets brutally murdered, and the casting makes this death doubly shocking.  (I am particularly fond of the costuming decision to have Davis wear glasses that are replicas of the glasses Joe Turkel wore playing Tyrell in Blade Runner.)
In one the pilot’s best scenes, Daniel argues with Joseph over his plan to resurrect Zoe.  “You can’t copy a soul,” Joseph insists, and Morales is such a good actor that this inherently convincing argument sounds almost like a Commandment coming from on high.  And yet, given what we know about Battlestar Galactica – I’m thinking here specifically of Kara Thrace during season four, and of the otherworldy replicas of Six and Baltar — the story of this fictional universe is an argument that yes, in fact, you can copy a soul.
But should you?  Returning again to Galactica, we find a profound ambivalence toward technology run amok.  It seems that Caprica is well aware of those fundamental concerns, and is determined to deepen them.
From where I’m sitting, this is all very welcome stuff.


*****
2015 Bryant here again, with a brief follow-up.  As we all know, Caprica proved to be a ratings failure, and did not live past its first season.  I watched the majority of the first season (though I did, to my shame, tune out at some point before it ended, probably around the time it got canceled).  So unfortunately, none of the promise of the pilot ever really came through in a lasting way.  I remember very little about the first season, and can't say for sure whether I even liked the episodes that aired.  I think I thought they were merely okay.
America and the world seems to have shared my indifference.
Ah, well!
by Bryant Burnette at 4:46 AM