It Was Wrong of Us to Stop: Dune Club Messiah, Session 2 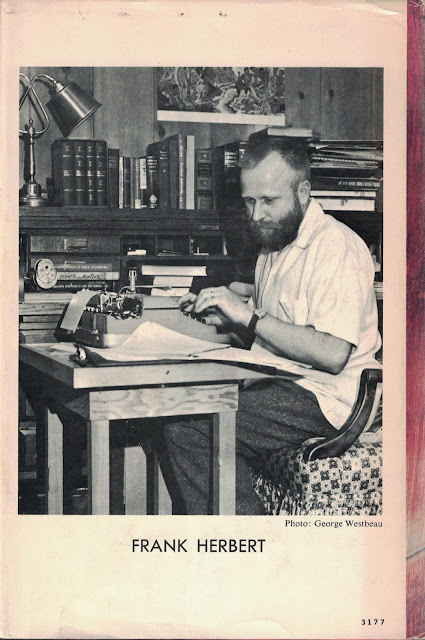 We begin again for another time, once more:

The advent of the Field Process shield and the lasgun with their explosive interaction, deadly to attacker and attacked, placed the current determinatives on weapons technology.  We need not go into the special role of atomics.  The fact that any Family in my Empire could so deploy its atomics as to destroy the planetary bases of fifty or more other Families causes some nervousness, true.  But all of us possess precautionary plans for devastating retaliation.  Guild and Landsraad contain the keys which hol this force in check.  No, my concern goes to the development of humans as special weapons.  Here is a virtually unlimited field which a few powers are developing.
--Muad'dib: Lecture to the War College from The Stilgar Chronicles

I don't have a whole lot to say about this epigraph, other than to point out that its focus on human weapons seems appropriate to head a chapter about Scytale.
The chapter involves the Face Dancer meeting Farok, a former confidante of Muad'dib's whose disillusion has caused a willingness to throw his lot in with the conspiracy.  Scytale -- calling himself "Zaal" -- has chosen to go to this meeting in the guise of Duncan Idaho.  He's done this seemingly to amuse himself, but soon begins to worry that he may have made a mistake; after all, some Fremen warriors, including this Farok, may actually remember Idaho.
Scytale feels ill at ease through much of the chapter, and I think most readers will be inclined to feel a bit of nervousness on his behalf; clearly, he has walked into a trap of some sort and is about to be captured or found out.  This turns out not to be the case; he has brought the trap with him, and in the end it is he who betrays and kills Farok.  Not before getting what he was there to get, of course.
In choosing to depict Scytale's mission as tenuous and imperiled, Herbert has also made the choice to continue to place us in a sort of sympathy with the Face Dancer.  By all rights, we should want whatever he is doing here to fail.  And maybe we do, if we stop to think about it.  I'm not sure we do stop in that way, however; I think it is more likely that we feel nervous for the guy, because we identify with him and forget that he's ostensibly the villain.


Here are some other things that stood out to me:


Apropos of nothing specific to this novel, news in Hollywood came today that Timothée Chalamet is apparently in deep talks to play Paul in the two-movie Denis Villeneuve adaptation of Dune.  What I'll say about that is this: if it's anywhere near as good as Blade Runner 2049 then it's got the potential to be something magnificent.  Here's hoping both movies are huge hits and Villeneuve can then make it a trilogy by adapting Dune Messiah as well!


Empires do not suffer emptiness of purpose at the time of their creation.  It is when they have become established that aims are lost and replaced by vague ritual.
--Words of Muad'dib
by Princess Irulan
I think that one speaks for itself, so let's move on to the rest of the chapter.
It's a tense Imperial Council meeting, in which we meet a teenaged Alia for the first time.  She is a bit of an instigator, obviously relishing her self-appointed role as needler to Korba, the Qizara priest (and seemingly the head of the religious order).
There's an excellent moment featuring Korba in which we see him through Stilgar's eyes.  The priest has been sent out onto the balcony to offer a benediction, and Stilgar observes him: "His gaze fell on the balcony window and Korba standing outside.  Korba raised outstretched arms for the benediction and a trick of the afternoon sun cast a red halo onto the window behind him.  For a moment, Stilgar saw the Court Qizara as a figure crucified on a fiery wheel.  Korba lowered his arms, destroying the illusion, but Stilgar remained shaken by it.
Paul seems no more impressed by Korba than Alia is.  "How could anyone react to Korba with other than cynical humor?" he thinks.  "What is more ridiculous than a Death Commando transformed into a priest?"
From there, the chapter proceeds into conversation about whether Paul will sign a treaty the Spacing Guild desperately wants him to sign.  There's also talk of whether a constitution is going to be ratified; Paul seems dead-set against it, and a few similar topics.  Eventually, talks turn to the fact that Irulan wishes to bear Paul's heir.  She herself is present in the room for this talk, during which it is formally decided that Paul will not give her a child.  There's a terrific bit when Paul says, "We all know she holds no love for me."
Herbert breaks the paragraph here, delivers a one-sentence follow-up paragraph: "Irulan went very still."  This is, in retrospect, a heartbreaking moment.  Spoiler alert: we will find out toward the end of the novel that Irulan loves Paul very much indeed.  There is zero reason to suspect that at this point in the novel, of course; but on reread, this line is fairly devastating.
Perhaps surprisingly, Paul shows more tenderness toward Irulan in this chapter than he has ever done before.  He apologizes to her for his decision, and he seems genuine in his sentiment.  It's tempting to assume that he has seen via his prescience the way all of this turns out, and therefore knows her true motivations; if so, it makes sense that he would have a softer side toward her.
Good chapter; I don't have a lot to say about it beyond that, sadly.
*****
"Once more the drama begins."
--The Emperor Paul Muad'dib on his ascension to the Lion Throne


That notion probably ties in with the idea presented earlier that the purpose of power is to be besieged.  I lack anything interesting to say on this topic, so we'll move on to the rest of the chapter, which is where we (and Paul) meet Hayt, the ghola of Duncan Idaho.

These proceedings are observed by Alia, who is hiding in a spy-hole the entire time.  Here's an interesting bit:

"She sensed the hidden perils in this gift" [Hayt] "then.  This was a Tleilaxu thing.  The Tleilaxu displayed a disturbing lack of inhibitions in what they created.  Unbridled curiosity might guide their actions.  They boasted they could make anything from the proper human raw material -- devils or saints.  They sold killer-mentats.  They'd produced a killer medic, overcoming the Suk inhibitions against the taking of human life to do it.  Their wares included willing menials, plaint sex toys for any whim, soldiers, generals, philosophers, even an occasional moralist."

A few thoughts about that:

Truth suffers from too much analysis.
--Ancient Fremen Saying


That epigraph's sentiment certainly matches with the general tone of the novel thus far, which is that the Fremen worldview is determinedly singular.  One can see how this saying about truth would be entirely accurate from their insular point of view, and also entirely inaccurate from an outside point of view.

This suggests the possibility that dueling truths necessarily produce friction when they come in contact with one another.  Hi, guys; it's the present day saying hello!

This chapter itself is a meeting between Irulan and Revered Mother Mohiam, in which the older woman commands Irulan to begin exploring the possibility of crossbreeding Paul with Alia.  Their genetic mission cannot be risked by introducing the wild element of Fremen blood into the equation; if Chani should conceive, she must be killed.

Irulan is highly agitated by the meeting, furious that she is not allowed to have her chance as the mother of an heir.  She agrees to play her part, but we have cause to wonder if she might not have a double-cross (triple-cross?) in mind.  "Let them spend me," she thinks, angered by the notion of her inherent worth being cast away by the Bene Gesserit.  "I will show them what a princess is worth.  Perhaps I'll buy them more than they expected."

After she has gone, Mohiam (who has been casting tarot cards and has received a troubling combination) wonders if Irulan might yet destroy them.

I should admit that Irulan is one of my favorite characters in the entire series.  She is barely present in the first novel at all, only coming to active prominence in the sequel.  But a reread of Dune reveals the fact that Irulan actually hangs over nearly its every page like a shadow, or perhaps like a ghost; this is intensified by a knowledge of Dune Messiah, and I find her story as it plays out here to be moving stuff.

That's all for session 2; see you in a week or so.