The Place Where the Moon Fell: Dune Club Messiah, Session 6

Here's the cover I chose for this final session: 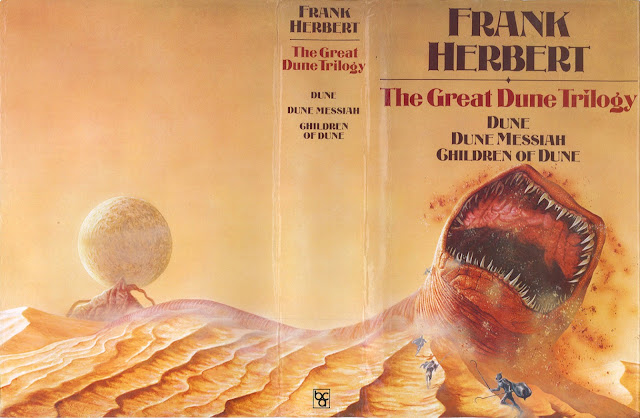 I love that.  Copies of that edition are apparently not easy to come by on the cheap, though, so I'm probably never going to have one.
*****
The sequential nature of actual events is not illuminated with lengthy precision by the powers of prescience except under the most extraordinary circumstances.  The oracle grasps incidents cut out of the historic chain.  Eternity moves.  It inflicts itself upon the oracle and the supplicant alike.  Let Muad'dib's subjects doubt his majesty and his oracular visions.  Let them deny his powers.  Let them never doubt Eternity.
--The Dune Gospels
This chapter deals primarily with Alia being on a monster trip.  "The potion of melange she'd drained just before leaving the temple was the largest she'd ever attempted -- a massive overdose.  Even before beginning to take effect, it had terrified her."
She has done this because she feels she must gain some insight into why Paul has done the things he has done; she wishes "to see where it was her brother walked with his eyeless stride."


She's found by Hayt, who watches over her while medics are summoned.  While she's in the throes of the melange, her consciousness is experiencing visions on top of visions on top of visions, so that when she looks at Duncan/Hayt, the ghola's "features crawled, became aged, then young . . . aged . . . young.  He was life itself, assertive, endless."  In another moment, she finds herself lying on her bed, which "flowed with many bodies, all of them her own."
Alia even finds herself hearing the distant heartbeat of some child she may eventually give birth to.  This is a epic high even Hunter S. Thompson would shy away from.  Probably.
In the midst of it, she finds herself unburdening some of her worries to Duncan, who expresses his love to her.  "I didn't want to be different," she says pitifully.  "I just want to be loved . . . and to love."
Spoiler alert: we'll have to wait until Children of Dune to find out how that goes.


*****
There exists a limit to the force even the most powerful may apply without destroying themselves.  Judging this limit is the true artistry of government.  Misuse of power is the fatal sin.  The law cannot be a tool of vengeance, never a hostage, nor a fortification against the martyrs it has created.  You cannot threaten any individual and escape the consequences.
--Muad'dib on Law
The Stilgar Commentary


I should probably have a lot to say about that epigraph, but I believe I will simply allow it to speak for itself.

Not only am I not bringing my A-game to Dune Club Messiah, I'm not sure I'm even bringing my B- or C-game.  Sadly, it appears this final post is going to be a bit of a washout.  Fact is, I've been exhausted for weeks.  Months?  Arguably longer even than that, but for weeks, certainly; in some ways, this entire summer has been a big old washout for me, certainly as far as cogent blogging goes.

So it appears as if poor old Dune Club Messiah is going to limp to the finish line.  If so, let's try to limp in style and at least not shit our shorts on the way.  To the bulletpoints, away!


There was a man so wise,
He jumped into
A sandy place
And burnt out both his eyes!
And when he knew his eyes were gone,
He offered no complaint.
He summoned up a vision
And made himself a saint.

--Children's Verse
from History of Muad'dib

Not a favorite epigraph, although I do dig that final couplet.

This IS, however, a favorite chapter.  I'm limping to the finish line; Frank Herbert sprinted, and kept right on going past it.

*****
We say of Muad'dib that he has gone on a journey into that land where we walk without footprints.
--Preamble to the Qizarate Creed


This is the final chapter of the novel, and within it  we discover that Paul -- truly blind now -- has gone into the desert to face his destiny.  Crucially, we are not present to witness this happen; we receive the information secondhand, and our focus in the final chapter is on the feelings with which Duncan is left by all of these events.

Some of my favorite bits:


And there is also a one-page epilogue in poetic form, titled "The Ghola's Hymn."  It's pretty great, actually; I'm not that big a fan of Herbert's verse, but this one is solid.  Are we going to look at it?  We are not.

What we are going to do is wrap this sucker up with a controversial summation: I have determined that this novel is indeed the equal of the first.  In fact...

Dare I say it?

I think this is a better novel than Dune is.  I will not, and could not, ever find room in my heart to love it more than I love Dune, but ... yeah, man, I think this one cuts a little bit deeper.  I think it completes Dune by turning its back upon it.

And I totally get how that experience might turn some readers off.  After all, read from that point of view, Dune really can work simply as an adventure novel.  The seeds for what happens in Messiah are all present there; the sequel is not by any means a betrayal of the first novel.  But if you don't notice that aspect of the first novel, or simply choose to ignore it, then Dune does work as sci-fi/fantasy fun.  I don't think you can enjoy Dune Messiah without going that extra step, though; and many readers have evidently proven to be unwilling to take it.

I'm fascinated to consider that six-grade me WAS willing to take that step.  There's a lot for me to chew on in contemplating that; I'm not in a chewing mood just now, alas, so I'm going to simply leave that morsel sitting on the plate, known but unexamined.  Perhaps I'll come back to it some day; Children of Dune sits beside it, so perhaps next summer.

For this one, though, we're going to go out on that note: yeah, I think -- at least within this moment -- that Dune Messiah IS, as that blurb so tantalizingly suggested, "all that Dune was, and maybe a little more."

And that, my friends, is something worth being.
by Bryant Burnette at 7:55 PM