I'm out of copies of Dune Messiah to show off as far as my own possessions go.  Here's a cool paperback edition I'd like to have: 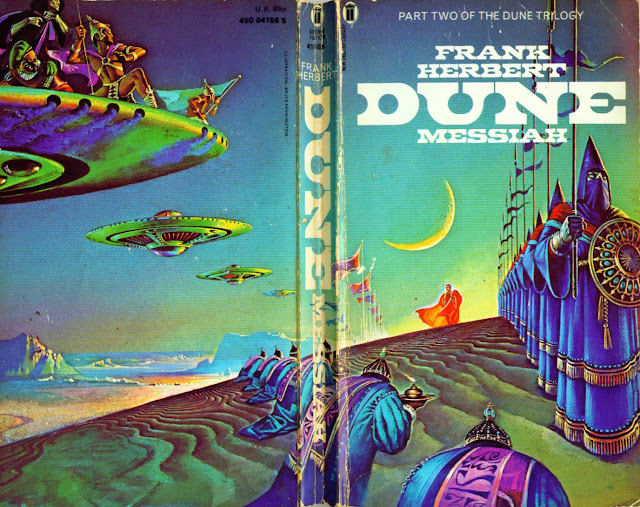 That's a New English Library edition.  They did the first four novels in this style; may as well have a look at those, too, I guess: 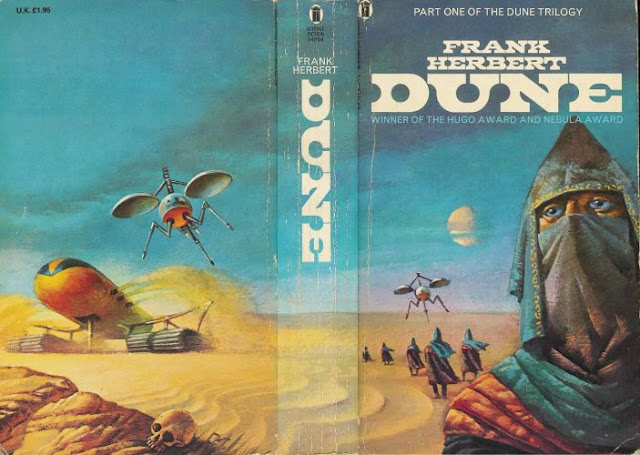 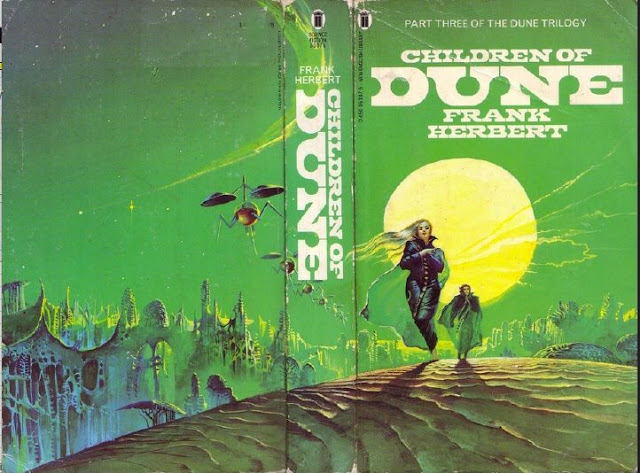 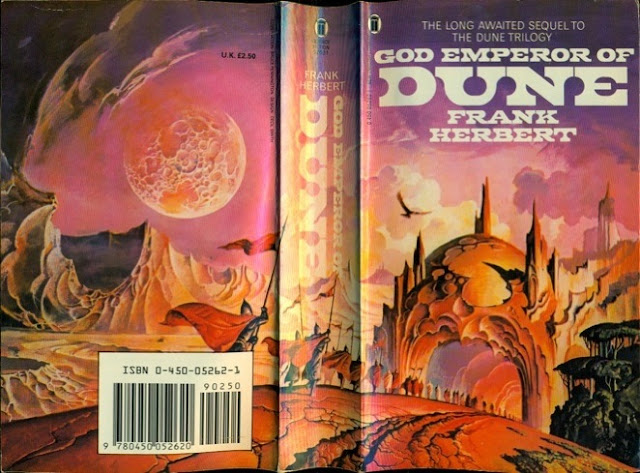 I'm not sure how close any of those is to the content of the actual novels, but hey, who can worry about trivialities like that?
The art on at least the first three novels is by Bruce Pennington.  My favorite of the bunch is Children of Dune, so here's an art-only version: 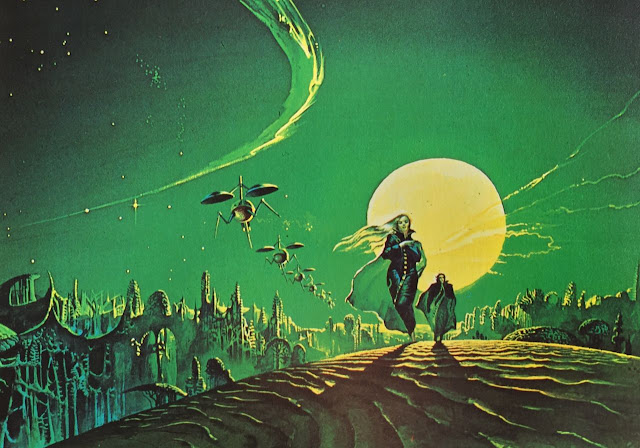 And while I can't swear this next cover is either Bruce Pennington or New English Library, I've got to share it: 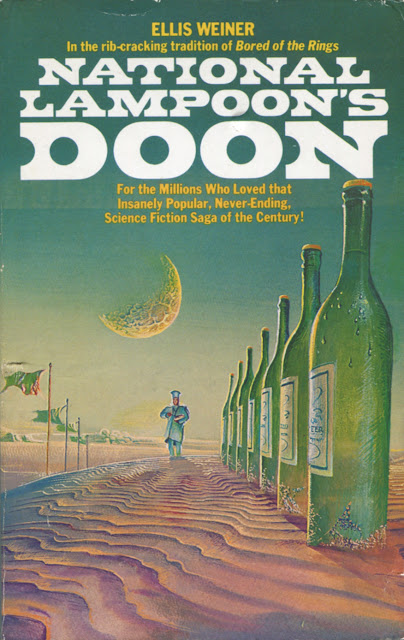 Bless your heart, National Lampoon's Doon.  That's likely to be the only humor we have in tonight's session.
*****
Production growth must not get out of step in my Empire.  That is the substance of my command.  There are to be no balance-of-payment difficulties between the different spheres of influence.  And the reason for this is simply because I command it.  I want to emphasize my authority in this area.  I am the supreme energy-eater of this domain, and will remain so, alive or dead.  My Government is the economy.
--Order in Council
The Emperor Paul Muad'dib
Sounds like a dick, if you ask me.  I'm sure there's a deeper significance than that to this epigraph, but it eludes me (possibly because I'm being lazy and am not seeking it).

[Say, how about an update on the actual Dune Club?  CBG 19 spoke eloquently on the subject of this chapter's epigraph in tonight's session: what Herbert, via Paul, is talking about here is imbalance between production and wages, which creates income disparity. 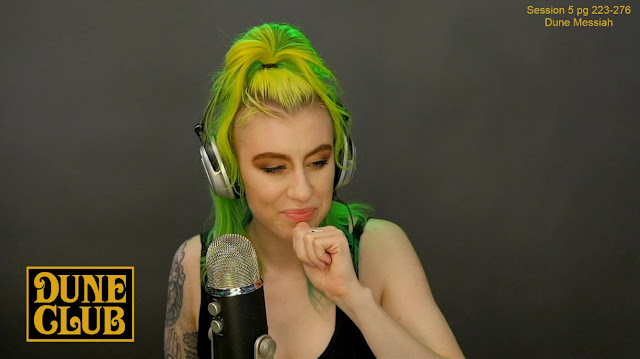 This makes sense within the context of the upcoming chapter, because Paul is visiting a "suburb" of seemingly wealthy Fremen whose wealth has slowly slipped away.]
Speaking of lazy, here are some bits I enjoyed, expressed via the lazy method of bulletpoints:

This chapter is great, but it's really just kind of a chapter that gets us to the next chapter.

The convoluted wording of legalisms grew up around the necessity to hide from ourselves the violence we intend toward each other.  Between depriving a man of one hour from his life and depriving him of his life there exists only a difference of degree.  You have done violence to him, consumed his energy.  Elaborate euphemisms may conceal your intent to kill, but behind any use of power over another the ultimate assumption remains: "I feed on your energy."
--Addenda to Orders in Council
The Emperor Paul Muad'dib
This epigraph represents rather a bleak assessment of human affairs, wouldn't you say?  Not inappropriately so, and certainly not inconsistent with the rest of the novel.
Frankly, I feel intellectually inadequate to discuss such weighty issues.  Somebody seems to have been consuming all my energy, and in many cases lately when I've sat down to the PC to blog about one thing or another, what I'm finding is that the only sound coming from my brain is a sort of low humming noise.  I'd kind of hoped to find within myself something cogent to say about Herbert's philosophical examinations; instead, it's like I'm a radio stuck between two stations, picking up no signal.  I know the signal is there; I just can't get my antenna to tune the sumbitches in.
In any case, let's blame me and me along for this; Frank Herbert and his superb novel are blameless.
We'll move on into the meat of the chapter, which focuses on the detonation of a "stone burner" inside Otheym's residence.  It is not entirely clear whether Otheym was aware this was going to happen; seems likely, but I'm not certain of it.  There are certainly hints that Bijaz knows it's going to happen.
Whatever the case, this limited atomic device has a devastating impact by releasing a form of radiation that blinds all those within a certain proximity to it.
Herbert's description of this incident runs for nearly two full pages.  It's awesome; i'm just going to transcribe it all:

"We want live prisoners," one of the guard officers hissed.
The sound was a vision-echo in Paul's ears.  It went with solid precision here -- vision/reality, tick for tick.  Ornithopters drifted down across the moon.
The night was full of Imperial troopers attacking.
A soft hiss grew out of the other sounds, climbed to a roar while they still heard the sibilance.  It picked up a terra-cotta glow that hid the stars, engulfed the moon.
Paul, knowing that sound and glow from the earliest nightmare glimpses of his vision, felt an odd sense of fulfillment.  It went the way it must.
"Stone burner!" someone screamed.
"Stone burner!"  The cry was all around him.  "Stone burner . . . stone burner . . ."
Because it was required of him, Paul threw a protective arm across his face, dove for the low lip of a curb.  It already was too late, of course.
Where Otheym's house had been there stood now a pillar of fire, a blinding jet roaring at the heavens.  It gave off a dirty brilliance which threw into sharp relief every ballet movement of the fighting and fleeing men, the tipping retreat of ornithopters.
For every member of this frantic throng it was too late.
The ground grew hot beneath Paul.  He heard the sound of running men.  Men threw themselves down all around him, every one of them aware that there was no point in running.  The first damage had been done; and now they must wait out the extent of the stone burner's potency.  The thing's radiation, which no man could outrun, already had penetrated their flesh.  The peculiar result of stone-burner radiation already was at work within them.  What else this weapon might do now lay in the planning of the men who had used it, the men who had defied the Great Convention to use it.
"Gods . . . a stone burner," someone whimpered.  "I . . . don't . . . want . . . to . . . be . . . blind."
"Who does?"  The harsh voice of a trooper far down the street.
"The Tleilaxu will sell many eyes here," someone near Paul growled.  "Now, shut up and wait!"
They waited.
Paul remained silent, thinking what this weapon implied.  Too much fuel in it and it'd cut its way into the planet's core.  Dune's molten level lay deep, but the more dangerous for that.  Such pressures released and out of control might split a planet, scattering lifeless bits and pieces through space.

One thing that makes Herbert's Dune novels interesting is that more often than not, he omits action scenes.  Plenty of action takes place within the story, but Herbert frequently has it happen between chapters (off-screen, as it were); he's more interested in having his characters talk about the results.  There are exceptions, of course; plenty of them.  And for my money, this business with the stone burner is among the most visceral moments in these first two novels.
A few thoughts based on this passage:


The big revelation of the chapter is that even though Paul has been blinded, he can still see via his prescient vision.  In order to do this, it seemingly takes a sort of conscious effort: "As he looked at the troopers beginning to stand up around him, the mist on Paul's eyes faded into darkness."  (Damn.)  "He summoned up his oracular vision of these moments, then, turned and strode along the track that Time had carved for him, fitting himself into the vision so tightly that it could not escape.  He felt himself grow aware of this place as a multitudinous possession, reality welded to prediction."
This is a rather incredible plot development; and yes, I mean that as a compliment.  There's really not much else in fiction quite like this; some of what Alan Moore does with Dr. Manhattan in Watchmen gives it a run for its money, but this idea of a blinded Paul Muad'dib whose sight is nevertheless intact is something that has been with me for decades, and is seemingly never going to go away.
And boy, how I hope it never does.
*****

He has gone from Alia,
The womb of heaven!
Holy, holy, holy!
Fire-sand leagues
Confront our Lord.
He can see
Without eyes!
A demon upon him!
Holy, holy, holy
Equation:
He solved for
Martyrdom!

--The Moon Falls Down
Songs of Muad'dib

That epigraph combines two of my least favorite things: religion and mathematics.  So we'll move on from it quickly.

My notes on this chapter:

Tibana was an apologist for Socratic Christianity, probably a native of IV Anbus who lived between the eight and ninth centuries before Corrino, likely in the second reign of Dalamak.  Of his writings, only a portion survives from which this fragment is taken: "The hearts of all men dwell in the same wilderness."
--from The Dunebuk of Irulan


I have a very serious question about this epigraph.  Is that the correct way to adjectivally represent those centuries?  See, I myself would write "eighth and ninth centuries," and I'm tempted to assume this is simply a typo.  However, if you consider "eight and ninth" to be a singular concept, refer to a single period of time that contains both centuries -- as opposed to thinking of this as two different century-length period of time -- then maybe that IS the correct usage.  Frank Herbert probably knows better than I would.

Unpacking the actual content of the epigraph a bit, it seems to me to primarily be another way of stating this novel's theme of the course of humanity being an essentially ungovernable force.  If the hearts of people do indeed dwell in the wilderness, that's another way of suggesting that humans are, at heart, still wild animals.  If that is so, then their most deep-seated impulses are essentially ungovernable.  This is bad news for someone who has taken a lot of trouble to construct a government.

This chapter consists of a conversation between Hayt and Bijaz, who informs the ghola, "You are not Hayt.  You are Duncan Idaho.  I was there when they put your dead flesh into the tank and I was there when they removed it, alive and ready for training."  He tells him later, "We had a terrific struggle with you.  The flesh did not want to come back."

Duncan intuits during the course of the meeting that if Bijaz is a weapon, it is Duncan himself at which the dwarf has been aimed.  Bijaz confirms this, and begins singing to the ghola; this is a built-in trigger that puts Duncan into a sort of trance and permits Bijaz to program him further, for specific actions.  "You are the instrument I was taught to play," Bijaz says.

His reprogramming of the ghola complete, Bijaz brings Duncan out of the trance; Duncan picks up where he'd left off, accusing Bijaz of targeting him.  "What is it you'd try to do with me?" he demands.

"A kindness," the Tleilaxu weapon answers.  "A simple kindness."

We'll find out what that is next week, as Dune Club Messiah reaches its finale.
by Bryant Burnette at 6:51 PM