The first season of Babylon 5 is a rough beast.  It's got some good episodes -- maybe even a handful of great ones -- but it's also got some true dross.  The majority of the episodes are of a sort typified by "Soul Hunter" in that they're too shabby to praise, but too notable in some key aspects to fully dismiss, either.
This can make recommending the series to people iffy.  Even if you feel certain they'll enjoy B5 as an overall story, there's simply no doubting it: this first season can be a tough row to hoe.  But there aren't all that many episodes that can be skipped, either; many of them, even the lame ones, contain elements that are simply too important to what comes later.
Let's take a jaunt through "Soul Hunter" and see what's fit to be seen. 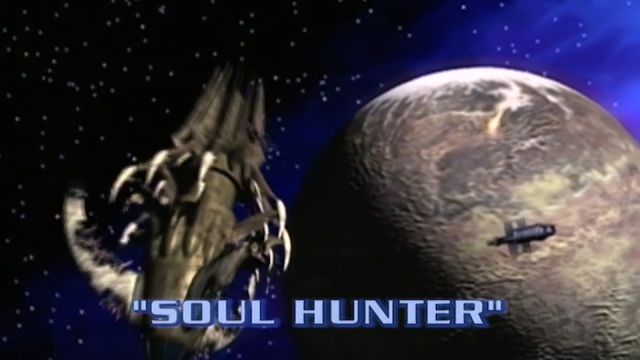 
I'll tell you up front: it's my intention to get in and out quick with this one.
We'll see how successful I am; my intent and my results don't always align in that regard. 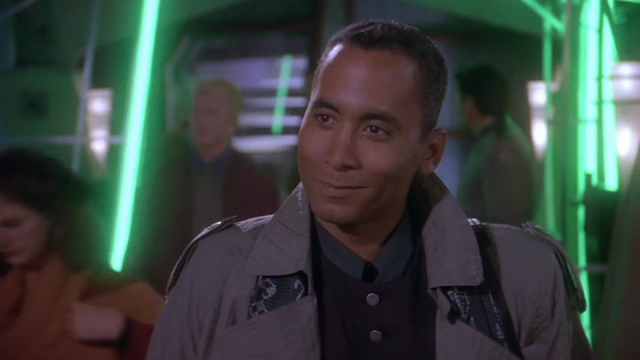 Those watching the series for the first time may have wondered during "Midnight on the Firing Line" where Dr. Kyle was.  Well, wonder no longer: he's gone, never to be seen again.  Written off the show in favor of Dr. Franklin.  Franklin even mentions the old coot.  "Ran into Dr. Kyle at the transfer point on Io," he tells Sinclair; "he sends his regards."

I'll render my verdict fairly quickly: I don't think this is a particularly good episode.  I don't mind it; it's got a lot in it to appreciate.  But as a whole, I think it's pretty weak.  The idea of the Soul Hunters is a little out-there for my tastes; and in a somewhat ambiguous manner, on top of that.  And yeah, I get it; that's purposeful.  But is that aspect useful to the series overall?  Does it result in a quality episode?

I'd answer the former question with a "not really," although I'll admit that it does help to layer some of the spiritual aspects of the series.  I'd answer the latter question by saying that the episode ends up being too filled with cheese and convenience to be of significant quality.

But, as I said, there are things to appreciate.  For example, I love the scene that follows the one in which Delenn tries to kill the Soul Hunter.  She's in Sinclair's quarters, apologizing for her outburst, even as she defends her urge to take action.  "You do not know these things as I do," she says apologetically.

"Then educate me," responds Sinclair.  It's a very simple, very brief moment, but Michael O'Hare's delivery is perfect.  It's not super dramatic; he simply delivers this as though Sinclair's openness to understanding things that are foreign to him is an innate part of who he is.  That's not a mistake.  I don't know if Straczynski's screenplay directed this in any way, or if the actual director (Jim Johnston, who would go on to direct a total of twelve episodes of the show during the first three seasons) had a hand in it, or if O'Hare was simply being canny.  Whatever accounts for it, it works, especially given a knowledge of the entire series. 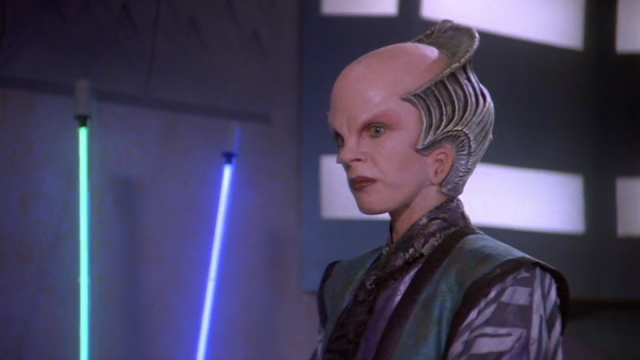 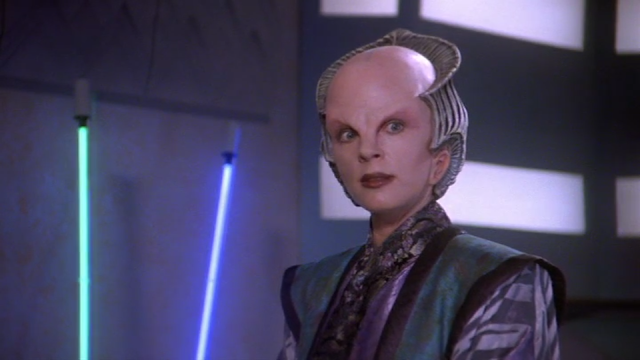 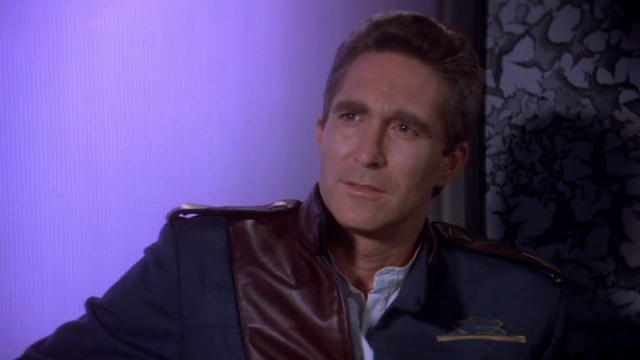 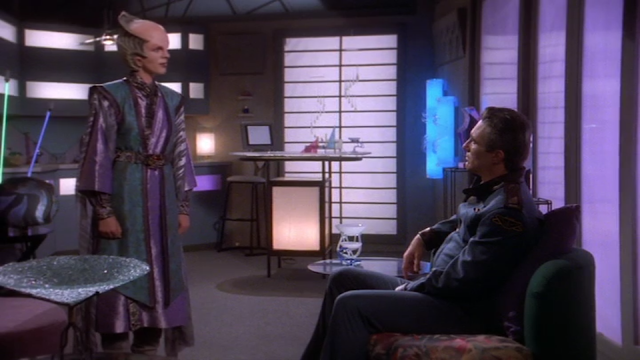 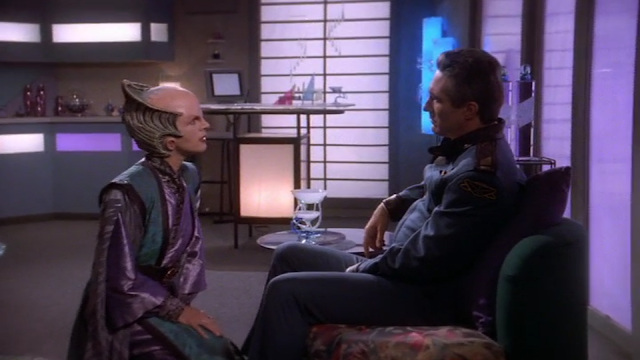 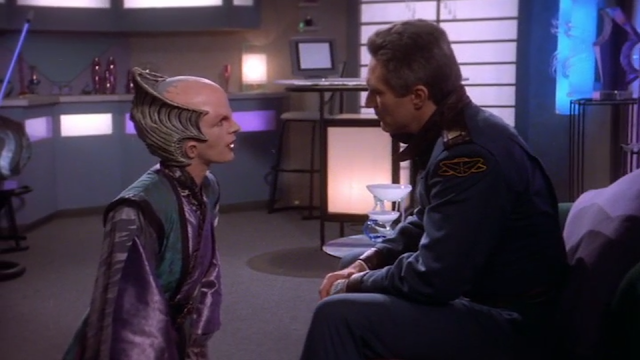 The Soul Hunter himself is played by W. Morgan Sheppard, who has done all sorts of things.  For example, he's the warden (?) of Rura Penthe in Star Trek VI, and he's a Vulcan Science Academy bigwig in the 2009 Star Trek; he's the narrator in Kingdom Hospital, he's in Shogun, he's in The Keep, and he's in about a gajillion other things, too.  He's about as good in this role as anyone could be expected to be.  As written, the role verges on camp. 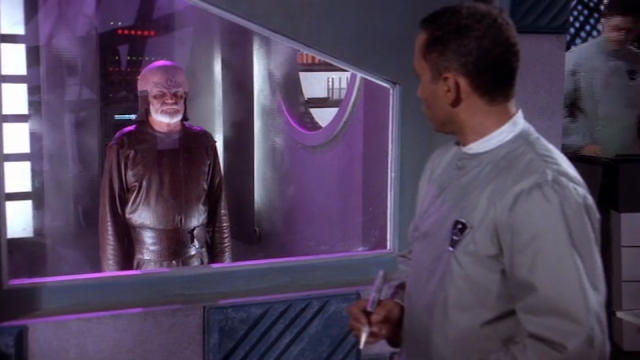 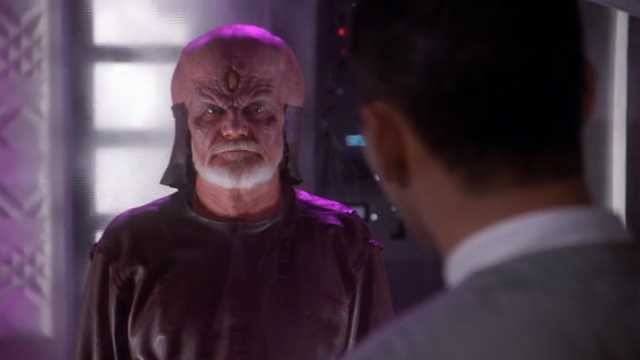 Later, the Soul Hunter is sitting in the isolation chamber, meditating.  He's doing this weird chant that I've remembered for the better part of twenty-five years now: "SEE-tow, REE-cho, MON-tow, RAY," he chants.  What THE fuck is this shit?!?  I'll tell you what it is: it's enough to have made me stop watching Babylon 5 in 1994.  Yessir, that's what did it.

Nowadays, I kind of like it.  Probably in a hipsterish way, granted.

Either way, I don't think Sheppard can be faulted.  He's giving the role his all, leaning into its weirdness in an attempt -- a successful one -- to make it distinctive. 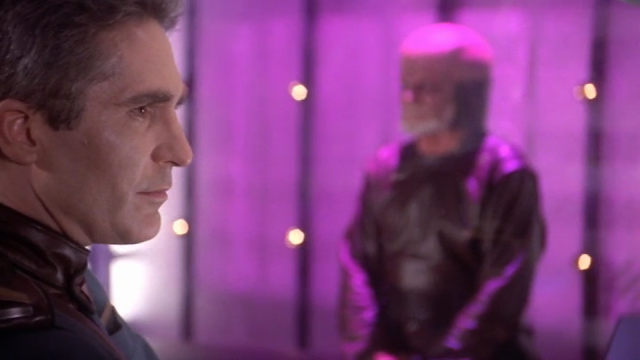 There's a great bit here, too, where the Soul Hunter talks about how his people have been continually stifled by the Minbari, who will not allow the Soul Hunters to "help" them.  All the Soul Hunters want to do is preserve the souls, and among their chief goals was "preserving" that of the Minbari leader Dukhat.  The death of Dukhat, the Hunter pointedly tells Sinclair, was the fault of humans; the result of the war between Earth and Minbar.  The Hunters were drawn to this death in large numbers: "We came: I; others," he says.  But the Minbari were not receptive: "They made a wall of bodies to stop us."

That kind of gives me a shiver up my spine, that does.

I also love the scene in which Ivanova and Franklin attend to the burial at "sea" of the guy whose stabbing death the Soul Hunter sensed.  "Have the next of kin signed off on the death certificate?" Ivanova asks the doctor.

"Yes," he answers; "they can't afford to send the body home."  This means it will be consigned to the void of space.


On the whole, I'm not into the Russkiesploitation the show engages in periodically during these early episodes.  At the same time, I can, when needed, summon a certain amount of fondness for the way Star Trek did that via Chekov; and Claudia Christian is great in this scene, so no complaints from me on this one.

Here's another scene I dig: the one in which Delenn goes to confront the Soul Hunter, only to have the tables turned on her.  She's indignant that he might have the captured souls of Minbari with him, and pledges to find them and set them free by destroying their containers. 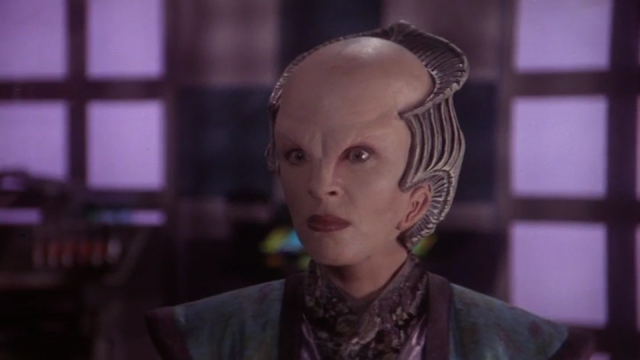 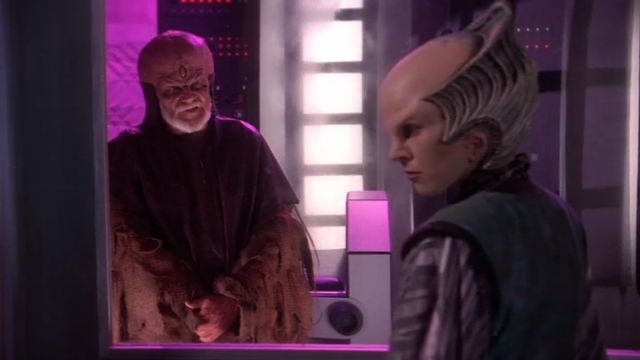 The real kicker comes, though, when the Hunter recognizes Delenn as one of the people who was present when he was stopped from claiming the soul of Dukhat.  "They called you Satai Delenn of the Grey Council," he marvels.  "What is one of the great leaders of the Minbari doing here playing ambassador?"  Delenn rushes out of the room, presumably aghast at being discovered in that way.

Obviously, this is a provocative revelation.  And there are further hints which get dropped throughout the episode.  When the Hunter catches a glimpse of Delenn's soul, he is stunned by what he sees.  "You would plan such a thing?" he asks incredulously.  "You would do such a thing?"

And later, of course, there are hints that Sinclair is somehow involved in this.  "Don't you understand?" the Hunter asks him indignantly.  "They're using you!"

Which, of course, leads to this:


The final scene of the episode shows us Delenn, who, having (with Sinclair's help) triumphed over the Soul Hunter, is freeing the souls he's collected.  She sits on the floor in her quarters, cracking the spheres that hold the luminous sould, allowing their energy to escape into the world once more; to go where, it cannot be said.  Mira Furlan is great here; she's got a devastated sort of tranquility on her face, and if that seems like a paradoxical attitude, well, welcome to Mira Furlan at the top of her game. 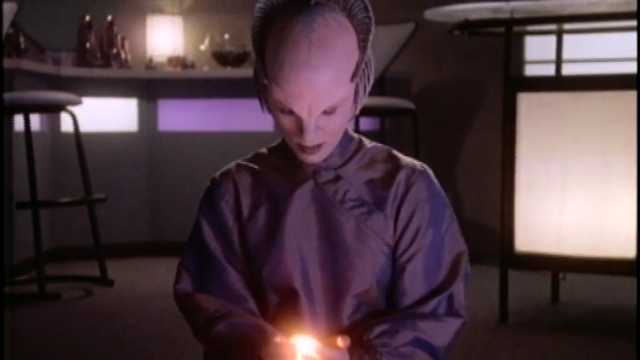 So yeah, for my money, there's some good stuff here.  Probably mostly for hardcore fans, though; this is certainly not the episode you want to use to try to convince someone to give the show their time.

Before me move into the spoiler section, let me gripe about a few things.  Even at its best, Babylon 5 could be a rickety endeavor from a production and/or acting standpoint.  But this episode is shabbier than most, and here are a few things that really fall flat for me: 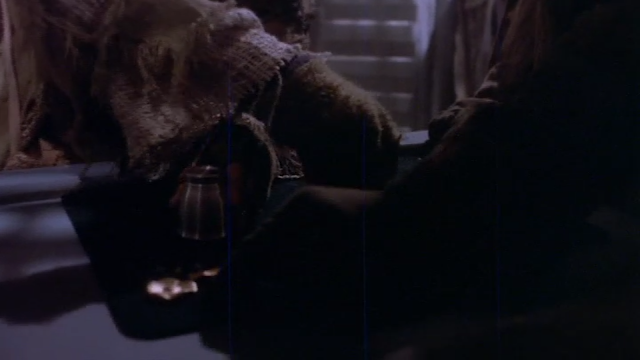 And now, we go into spoiler mode: 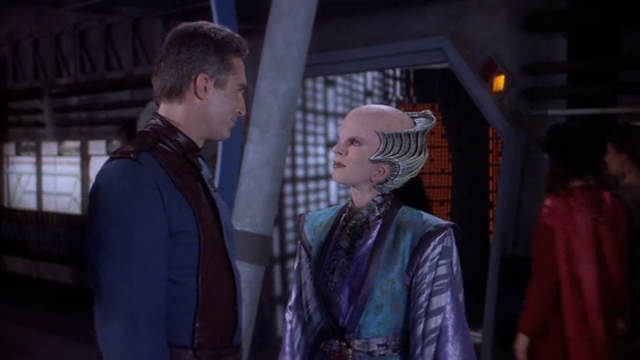 That's about all I got.  Except these leftover screencaps; I got those, sure... 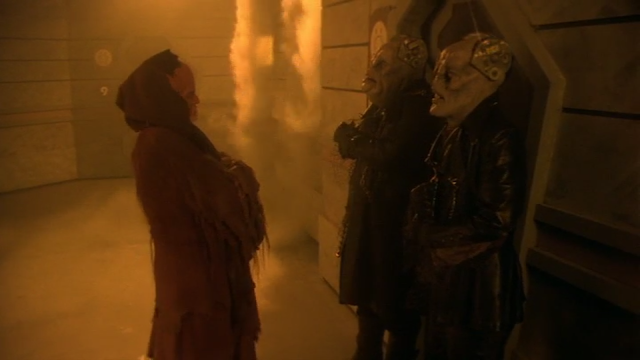 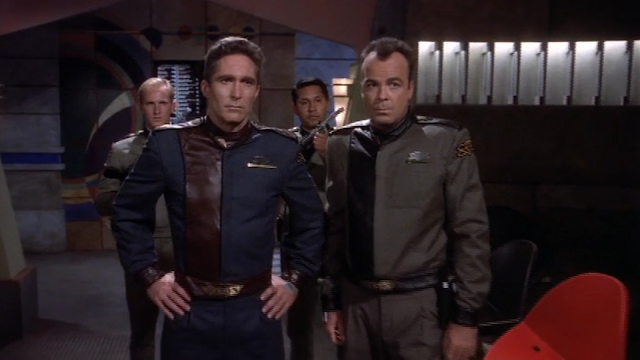 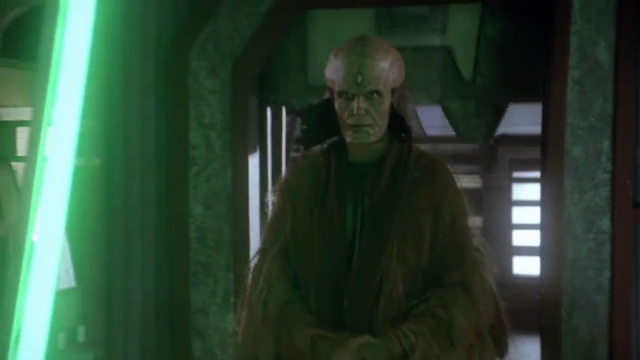 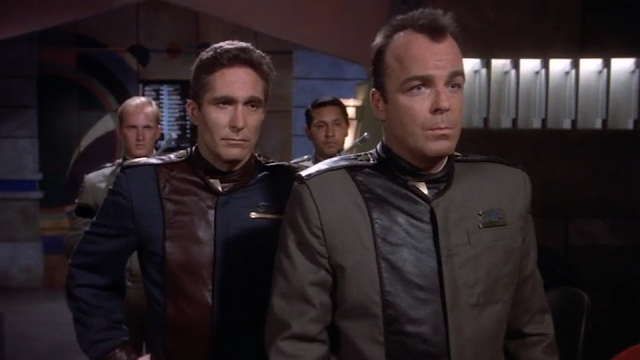 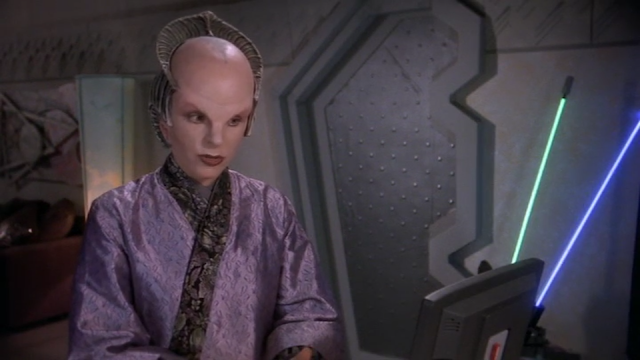 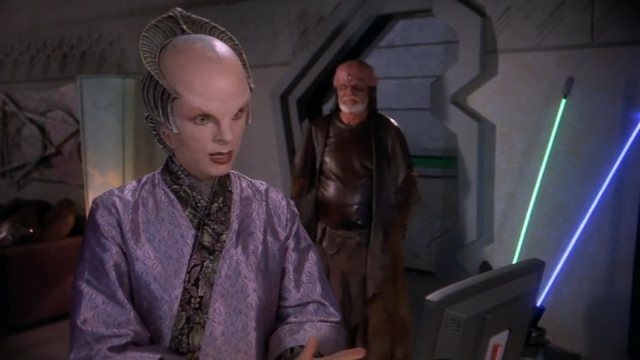 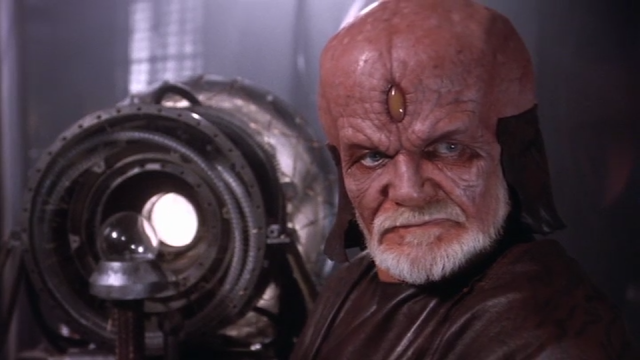 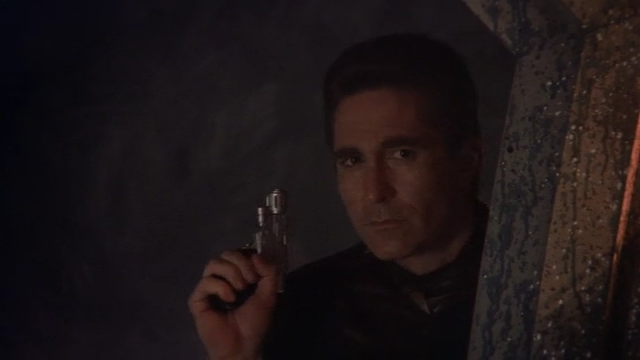 So there you have it.  Another episode down!