Tonight, on an all-new episode: Sinclair is kidnapped by black-ops agents who want to know what happened to him at the Battle of the Line.

"And the Sky Full of Stars" is sometimes cited as being the first great episode of Babylon 5.  I can't go that far, personally; it's not even quite my favorite episode of the series to that point (that remains "The Gathering," warts and all).

But it's solid enough, I suppose; you wouldn't be totally embarrassed for a friend to catch you watching it. 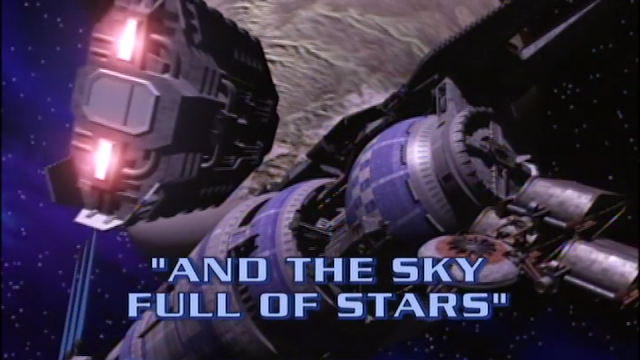 
This is a notable episode primarily for the way in which it advances the ongoing subplot related to Sinclair's missing time incident from the Battle of the Line.  The questions are by no means all answered here -- in fact, in the time-honored tradition of serialized stories, two new questions are introduced for every answer that is given -- but there's no question that big leaps forward are taken.


I should probably be more excited about that.  By which I mean, the episode should probably have made me more excited about that.  And I guess it kind of did the first time I watched it.  Nowadays, though, it strikes me as being a bit hollow because the strain really shows.  I mean, let's be honest: the entire plot of the episode exists only so as to develop Sinclair's plotline and deepend the mystery of what happened to him at the Line.

In case you're reading this without benefit of having seen the episode, here's what happens.  Two men -- who seem to be black-ops types (they're unofficially officially sanctioned by a force inside Earth's government that may or not be a rogue agency) -- show up on the station.  They seem to have been able to smuggle some high-tech equipment onboard that, when assembled, forms a sort of hypnosis/VR simulator.  They kidnap Sinclair -- offscreen (we don't see it happen, presumably so the writer of the episode didn't have to concoct a scenario under which that would be plausible) -- and strap him into the rig.  One of them then straps himself into a similar rig, and this allows him to kind of mind-meld with Sinclair in a way.  See, he wants to know what happened to Sinclair while he was MIA during the Battle of the Line; there are people back on Earth who think Sinclair must be part of some Minbari conspiracy to (in long-con fashion) take down Earth from the inside rather than via frontal assault.

All of that is ridiculous.  It's bullshit tech which may as be called the Expositionatorium 3000.  And while I totally buy that there would be prominent people inside EarthForce who had serious questions about Sinclair's missing time, I'm less sure I believe anyone would actually think the Minbari balked at conquering Earth because they suddenly figured out they could instead spend a decade infiltrating the government and do it the slooooooooow way.  That's dumb.

All of that is ridiculous, and it's obviously just an excuse to allow Sinclair to figure out what happened to him during his missing time.  I guess once JMS had established that Sinclair had no clue what happened to him, him finding out was only ever going to be the result of the careful application of bullshit.  One type of another, it was bound to be at least a little smelly.

Maybe not, though.  Were there other ways this information could have been delivered that might have smacked a bit less of contrivance?  Something with telepaths, maybe?  (Jason Ironheart could have accomplished it in a heartbeat.)  Something with Kosh, maybe?  Something that also advanced some other aspect of the plot, is what I'm saying.

And arguably, the episode does that as-is.  These Knight One and Knight Two fellows seem like a logical progression of what's been happening in other recent episodes, such as "Mind War" (hints of a powerful deep-state movement brewing in Earth's politics) and "The War Prayer" (the palpably brewing isolationist agenda that is gaining traction on Earth and spilling out into Earth-controlled space).  So maybe I'm being too harsh; maybe the way it plays out here is perfectly logical.

If so, maybe I'm being held up by the hammy performance given by Christopher Neame as Knight Two.  I'll say this: he really goes for it.  I've seen Neame be pretty good in other things (he's memorable in his small Licence to Kill role playing a British agent), so I know he's capable.  And he's not bad here; he's just a bit over the top.  Maybe this, too, could be said to work; the character is obviously a right-wing conspiracy kook, and lord knows fellows like that can be over-the-top in their presentation.

Anyways, what Sinclair learns about himself is that during the Battle of the Line, as things began to seem hopeless, he opted to go out like a boss: by taking his Star Fury on a kamikaze run straight into a Minbari heavy cruiser.  Just before impact, however, his craft was halted; he was rendered unconscious and brought bodily aboard the Minbari ship, where he was brought before what he later figures must have been the Grey Council.  There, he was tortured and ... tested in some way?  He doesn't know why any of this happens, nor does he know what it means.  But he knows one thing: he knows the identity of the one of the robed and hooded Council members.  "I know who you are," he says (probably only in his remembrance of the event) to one of them; he throws back the figure's hood, and finds Delenn standing there.

In the midst of this reverie, Sinclair -- not very plausibly -- breaks free of his restraints.  He incapacitates Knight Two and escapes from the room where he's being held.  He's still in the grip of the drugs he's been given to enable to reverie, and he believes he is still on the Minbari vessel, attempting to escape from it.  This leads him to the zocalo (the business district), where he begins firing on security personnel.  Knight One is in hot pursuit, but he's taken down by security.  Delenn is (conveniently [?]) there, and she tries to talk Sinclair down.  It looks for a moment as if he might kill her, and he repeats what we've heard before: "I know who you are."

Delenn agrees: she is his friend.  This calms him down, and his having to kill the not-actually-dead Knight One seems to snap him out of it altogether.

This stuff is good.  If you've got an affection for the series, it's probably a notch above good.  Obviously, this is a crucial moment in the larger story, and even if it was crap, one couldn't write it off as skippable.  But I think it's mostly good; Michael O'Hare is fine, and Mira Furlan is Mira Furlan, and the Minbari stuff is intriguing and manages not to feel like a non-answer cheat of an answer.  Which is probably to say that it feels very much like the larger answers are yet to come.

As, obviously, they are.  But you won't get any of that from me, at least not in this post.

Now, how about some screencaps? 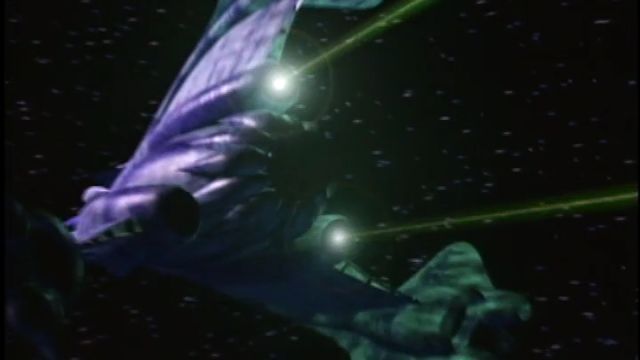 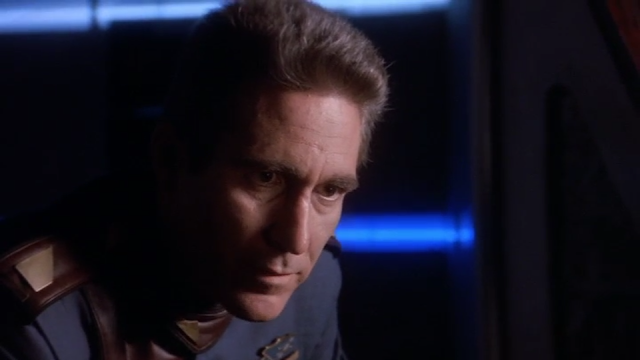 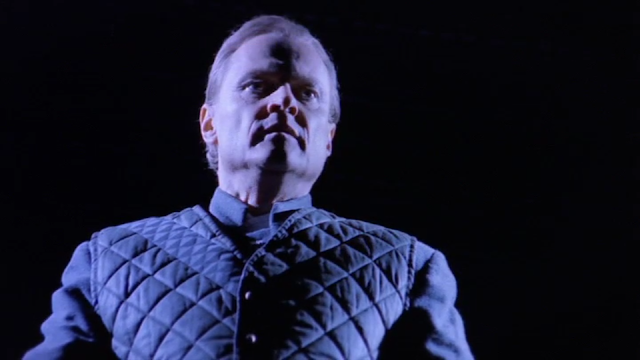 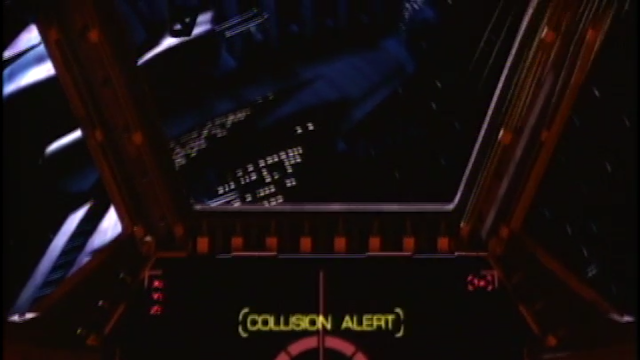 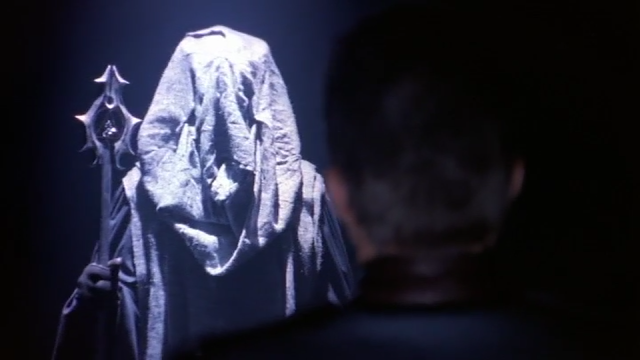 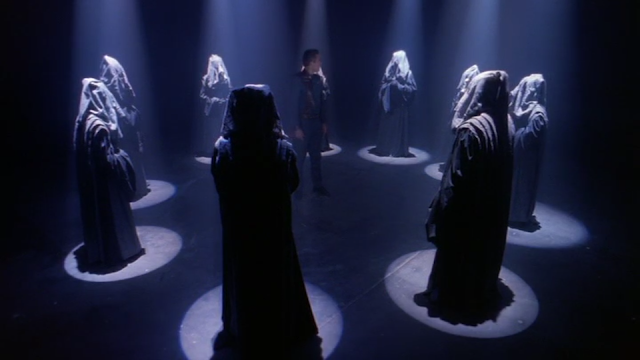 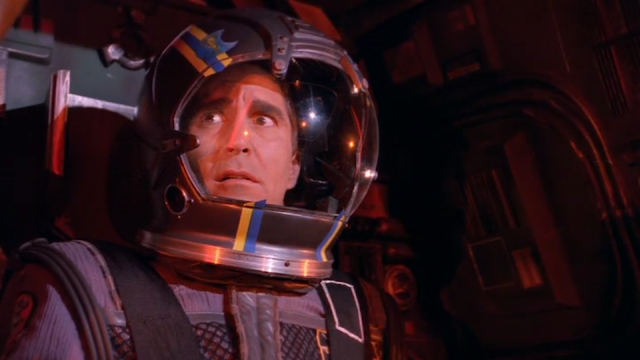 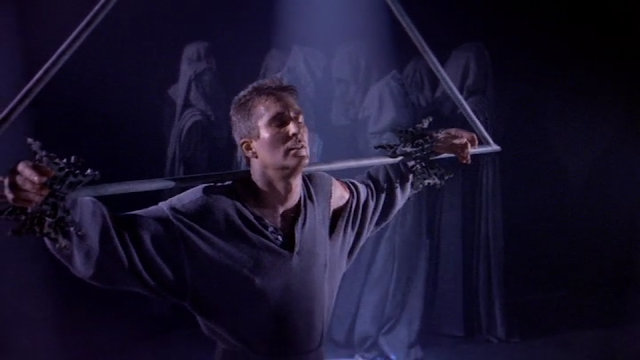 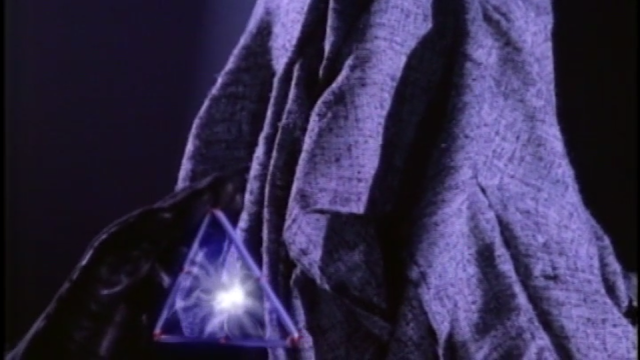 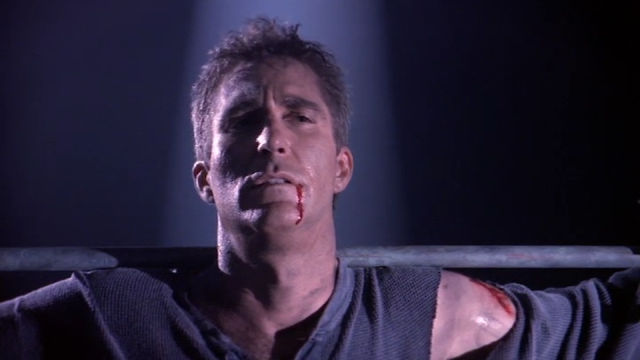 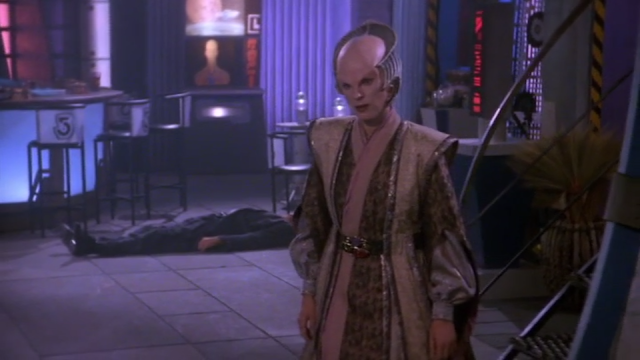 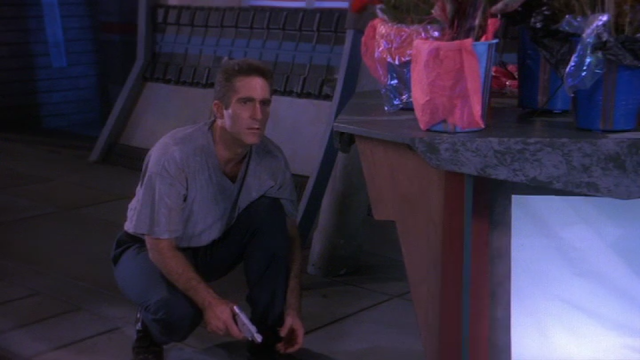 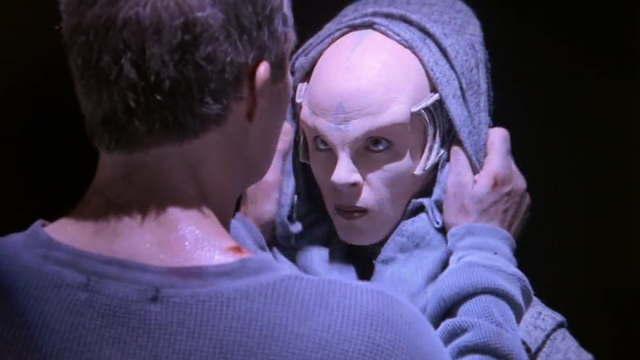 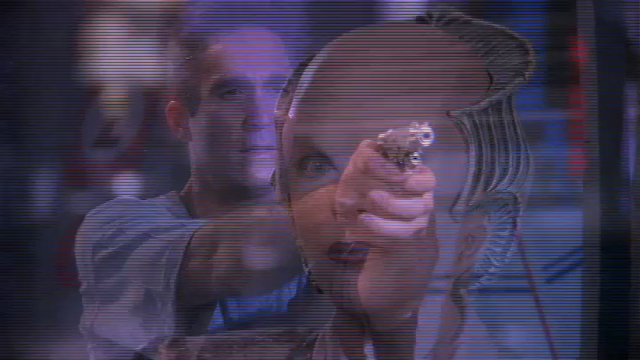