We're All Aliens to One Another: Babylon 5, "Infection" (season 1, episode 4)

Previously on Babylon 5...
Tonight, on an all new episode: a deadly relic from a dead alien world threatens to tear the station apart, and only Sinclair can stop it!
*****

You know, the Ikaarans fought against invaders just like we fought against the Minbari.  They became obsessed with it.  Back home, there's a growing pro-Earth movement, rumors of hate groups targeting aliens; and on all sides, the fanatics who think that society has to be protected against anyone who's different.  I'm starting to wonder if what we just saw is a preview of things to come.


"Infection" is routinely listed as being either THE worst episode of Babylon 5 or a shortlist entry for consideration.  In a technical sense, I guess I kind of agree with that; at best, it's problematic, and at worst, it's sloppy and poorly produced.  This is not the episode to use to ever try to convince someone to become a Babylon 5 fan.

But that's true of most -- if not all -- of these early episodes, and in the end I don't think "Infection" is notably worse than either "Soul Hunter" or "Born to the Purple." 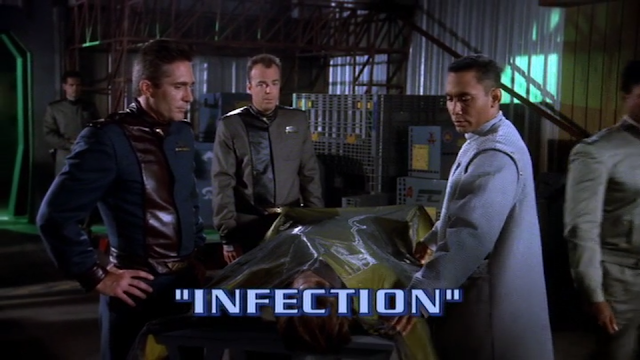 
The story: a former teacher of Dr. Franklin's comes onboard the station with an opportunity for his former pupil -- to assist in the study of recently-discovered artifacts from Ikarra 7, a dead world once home to a thriving and advanced civilization.  These turn out to be pieces of biomechanical weaponry; the very weaponry which was responsible for the extinction of the Ikarran people.  An assistant of Franklin's teacher is taken over by the weaponry, which alters his DNA and sets him on a course to destroy the station if he cannot be stopped first.

I don't have too too much to say about this one, so let's run through my screencaps and notes in relatively short order. 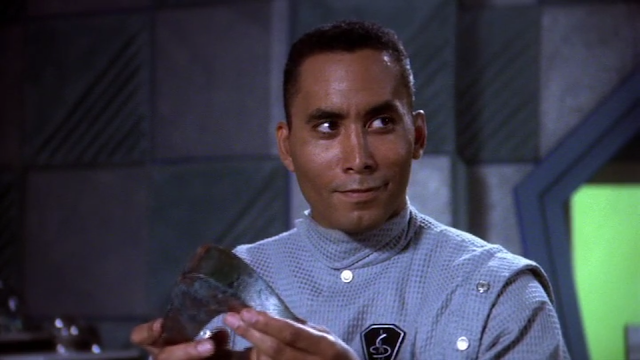 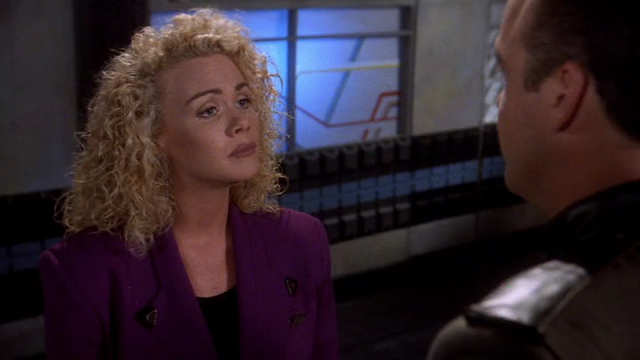 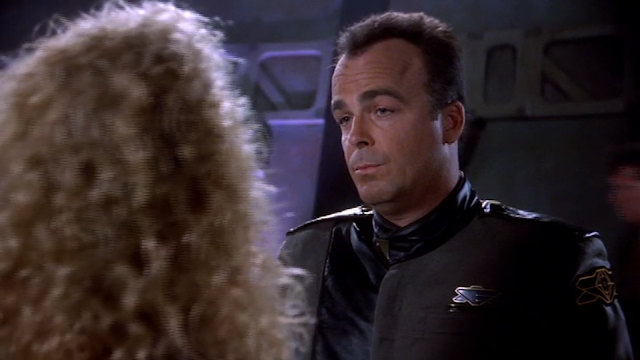 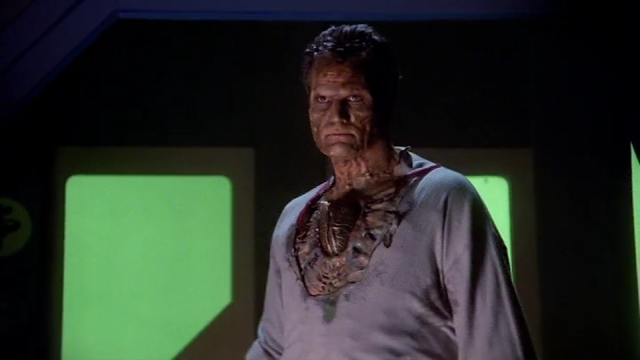 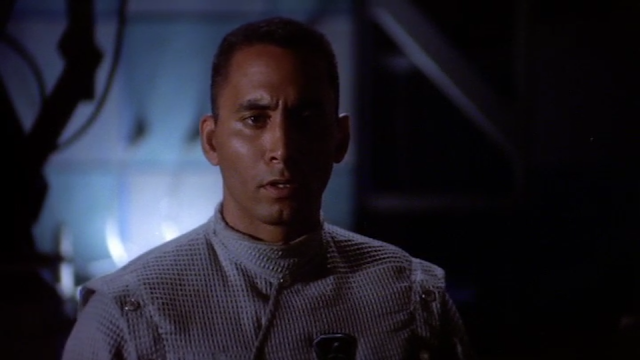 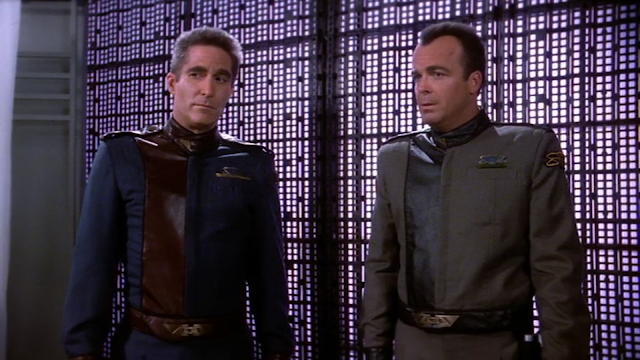 The Ikarran weapon, being biomechanical, contains an expository repository so that we, the audience, can know what's going on.  Franklin finds it, watches it (off screen), and tells Sinclair all about it.  The Ikarrans were being invaded, and to combat the invasion they engineered a line of weapons designed to kill anything that wasn't pure Ikarran.

"So who set the parameters of what it meant to be a pure Ikaaran?" asks Sinclair, not unreasonably.

Franklin answers, "A coalition of religious fanatics and military extremists that ran the government.  They programmed the weapons with a level of standards based on ideology, not science." 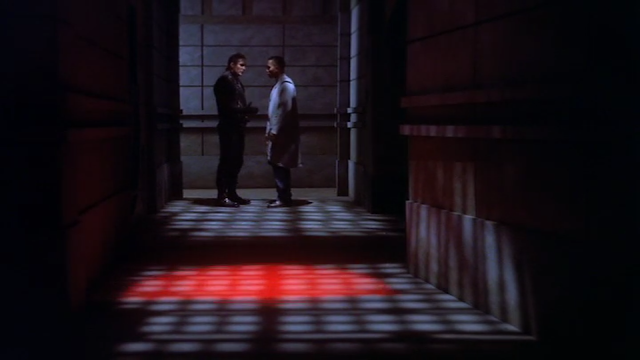 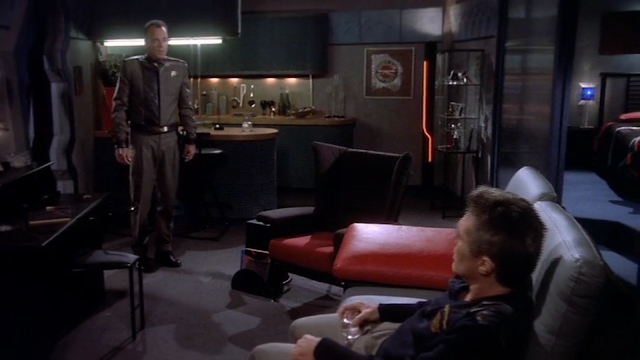 After the action has concluded, Garibaldi confronts Sinclair in his quarters in a scene which proves that even in a mediocre-to-awful episode like this one, Babylon 5 can and does distinguish itself from other sci-fi shows.  Garibaldi confronts Sinclair over his willingness to put himself in the line of danger.  Hell, it's not just a willingness; Sinclair seems to go out of his way to do so.

Garibaldi says he knew guys who'd been in the war and come out changed.  "They keep looking for ways to go out in a blaze of glory," he says, smartly not directing this right at his friend and commander but instead generalizing it.  "I think they're looking for something worth dying for because its easier than finding something worth living for." 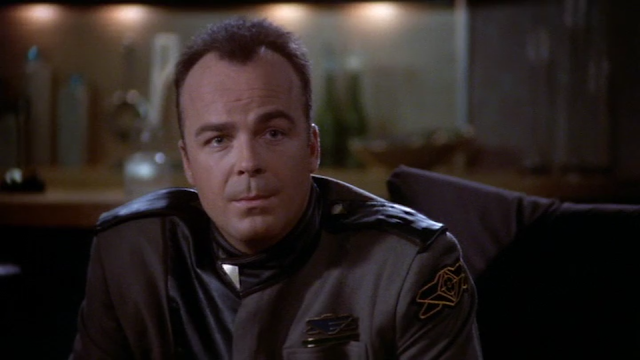 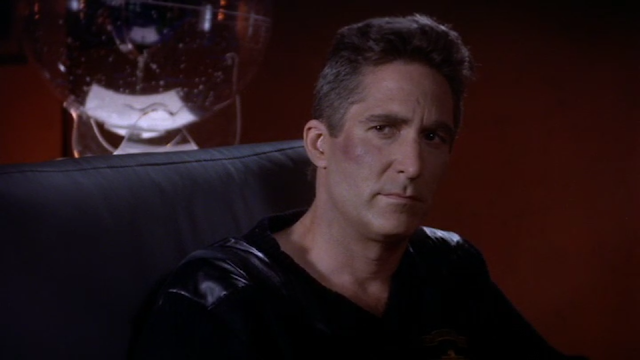 And in the second of a trio of wrapup scenes that make me like this episode even though it's mostly shabby, Ivanova spots Franklin looking troubled and asks what's up. 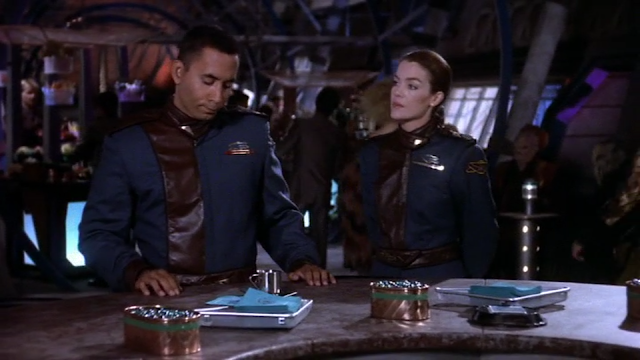 "You know, the Ikarran[s] fought against invaders just like we ought against the Minbari," says Franklin.  "They became obsessed with it."  Then he begins talking about something which calls back to a subplot from earlier in the season.

"Back home, there's a growing pro-Earth movement ... rumors of hate groups targeting aliens ... and on all sides, the fanatics, who think that society has to be protected against anyone who's different.  I'm starting to wonder if what we just saw is a preview of things to come." 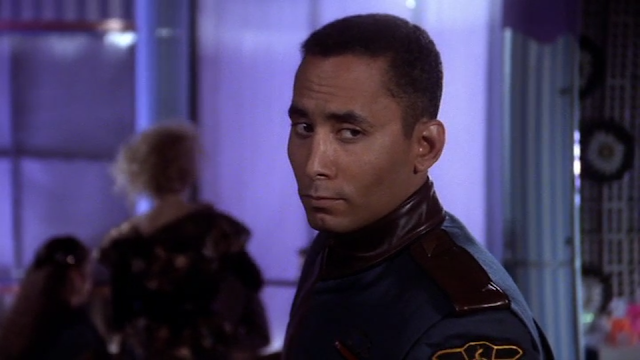 The episode concludes with the ISN reporter finally getting her interview with Sinclair and asking him if all this crazy shit is worth it.

"I have to ask you the same question a lot of people back on Earth are asking about space these days," the reporter says.  "Is it worth it?  Should we just pull back, forget the whole thing as a bad idea and take care of our own problems at home?" 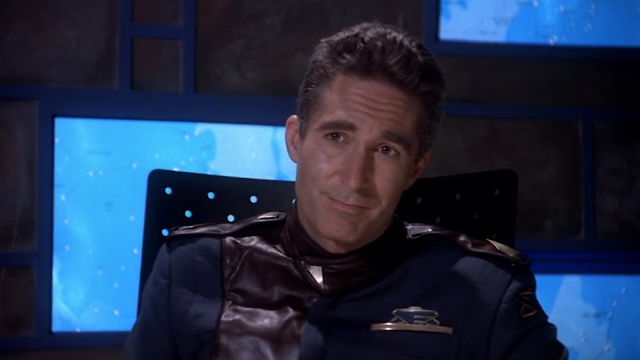 "No," answers Sinclair resolutely.  "We have to stay here.  And there's a simple reason why.  Ask ten different scientists about the environment, population control, genetics ... and you'll get ten different answers.  But there's one thing every scientist on the planet agrees on:  whether it happens in a hundred years or a thousand years or a million years, eventually our sun will grow cold and go out.

"When that happens, it won't just take us.  It'll take Marilyn Monroe ... and Lao Tzu and Einstein and Morobuto and Buddy Holly and Aristophanes ... all of this.  All of this was for nothing ... unless we go to the stars."
Nice sentiment.  Not sure Michael O'Hare was the right guy to deliver it, but I think it works relatively well, and it brings the episode into focus: this entire thing has been an argument against isolationism.  You will perhaps note that this arguably puts the station and its commander at odds with popular sentiment on Earth.  (You will also perhaps note that this arguably puts Babylon 5 at odds with popular current real-world sentiment, in some ways.)  Not the last you're going to hear of that.
If only for these final three scenes, I think "Infection" gets a somewhat bum rap.  Is it a bad episode?  Yeah, it is.  But it's got thematic relevance to the overall series, and a (somewhat rare for this series) Roddenberrian philosophy and approach that charms me.
A couple more things I wanted to mention: