You Will Fall Upon One Another Like Wolves: Babylon 5, ''Deathwalker'' (season 1, episode 9)

Tonight, on an all-new episode: an alien wanted for war crimes makes Earth an offer it can't refuse, and Sinclair has to figure out how to keep the alien ambassadors from tearing the station apart. 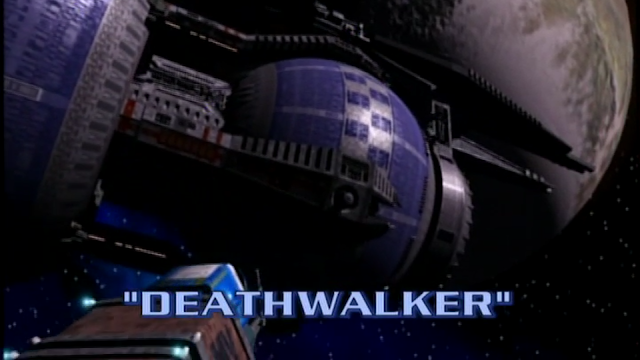 It's a fairly typical mid-first-season episode in that it has some quality scenes and ideas sandwiched between occasional moments of gracelessness in the production.  But I'd argue that this episode, despite its flaws, lurches capably in the right direction.

Here's what it's about, more or less: a greatly wanted war criminal named Jha'dur -- known colloquially as "Deathwalker" for no evident reason -- comes aboard the station.  She is recognized, attacked, and brutally beaten.  After she recovers, Sinclair learns that there's a reason why she is still seemingly in her prime despite having been in hiding for thirty years: she has invented a "universal anti-agapic" serum.  That is, she has found an immortality drug.  She's planning to give it to Earth, and Sinclair has orders to send her right on her way to there, but when the ambassadors who represent the League of Nonaligned Worlds -- many of whose people were ravaged by Deathwalker and her race -- find out about it, they demand that she be tried there on the station for "crimes against sentience."  However, the B5 advisory council -- composed of Eath, the Vorlons, the Centauri, the Narn, and the Minbari -- collectively vote against it, which raises tensions to a fever pitch.

Meanwhile, Talia is hired by Kosh to help with some bizarre negotiations.

Let's talk about the problematic aspects of the episode.  As is often the case, they mostly consist of iffy production/direction/performance decisions.  Such as these: 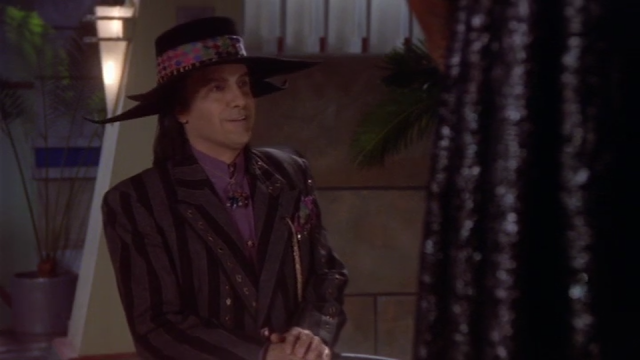 Folks, if you ever find yourself in a position to work on a science fiction television series and in a position within the production to influence the decision of whether or not to have a character dress garishly, always go with the "do not do that" option.  If you absolutely have to dress this character garishly, please please please do not compound that mistake by then having the character be a ethnic type who speaks in an accent and talks about pastrami.  I'd like to think I don't need to give you that advice, but I feel playing it safe benefits us all, and so the advice has been given.

If only someone had given it to JMS.

Although actually, things might have been even worse.  The role was written for -- actually written FOR -- and offered to Gilbert Gottfried, who expressed interest but was unable to take it on due to scheduling conflicts.  So in a way, we dodged a bullet there; we took a throwing star to the cheek instead, but hey.

JMS has actually said that he felt this subplot of the episode went too far, and that screenwriter Larry DiTillio took it places he'd prefer not to have gone.  I'm skeptical; this feels like JMS throwing a guy under the bus after the fact to me.  Abbut's wardrobe and demeanor strike me as the sort of thing that plausibly might have come from the same mind which signed off on the design and performance style for Londo and the Centauri.

Abbut's subplot is even worse because it involves Kosh in a series of scenes that are played partially for laughs, complete with semi-comedic flourishes from Christopher Franke in the musical score.  That's not a good use of Kosh.

Here's an edit that is not a good use of editing: 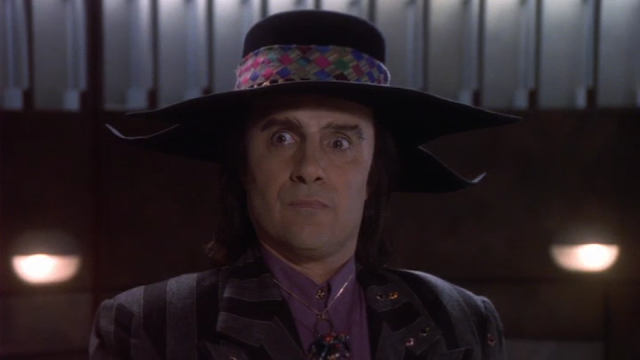 This stuff is unforgivably galling.  Everything about Abbut is tacky, and yes, I get that it's on purpose.  If you smear spoiled sour cream on my chair and I accidentally sit down in it, I'm not going to congratulate you on it just because you did it on purpose; you still smeared rancid dairy on my chair, and you must suffer the consequences for having done so.  This is how these things work, you see.

The Abbut subplot is composed of such a poor set of creative decisions that I empathize with anyone who gets to that stuff and just says "nope" and pulls the ripcord.  The first season of this series is, lamentably, filled with such moments.  I sometimes fall asleep at night dreaming about somebody putting me in charge of staffing a writers' room for a remake, so these miscalculations and errors in judgment could be pruned out in favor of emphasizing the many things that do work.

And this episode has those moments, too.  In fact, if you can power past Abbut and past Na'Toth's inept bellowing, I'd say this is mostly a strong episode.  Michael O'Hare has his customary weak moments, too, I guess, but the central conflict of the episode is a compelling one.

Jha'dur's invention (the anti-agapic) is one which brings many of the tensions which underpin the series to the fore.  Let's take a look at how the various races respond:


There's another important indicator in how all of this works out.  Sinclair, though he is initially determined to follow his orders and send Jha'dur to Earth, quickly finds himself in sympathy with the Abbai ambassador and her compatriots.  He knows that allowing them to put Jha'dur on trial is the only good way out of this, and he's determined to find a way to give them what they need without flat-out defying his orders.

Consider, though: we never see Sinclair consulting Earth's government on his decisions.  It feels to me like he simply did all the things he did and then planned to let his superior know about it later on.  Which seems like the sort of thing that could get a fellow in hot water.  And, of course, is entirely consistent with where the series ends up going further down the road; we don't see any of that actually play out here, but it feels to me as if it is simmering beneath the surface, and that makes it interesting to me.

The episode finds its keenest points of interest in the climax.  We find out via Deathwalker that her anti-agapic is a two-edged sword.  It works; it unquestionably works.  However, the vital component of its chemistry is something that can only be taken from another living being.  The screenplay is vague as to what that is, but it's very specific as to the ramifications: in order for one person to live forever, another must die by supplying whatever this chemical is.

"You will fall upon one another like wolves," enthuses Jha'dur.  "It'll make what we did pale by comparison.  The billions who live forever will be a testimony to my work; and the billions who are murdered to buy that immortality will be the continuance of my work." 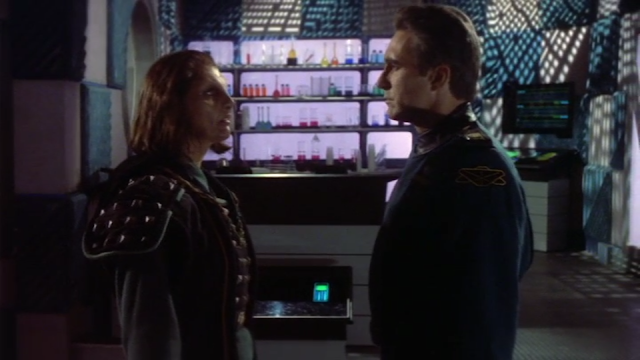 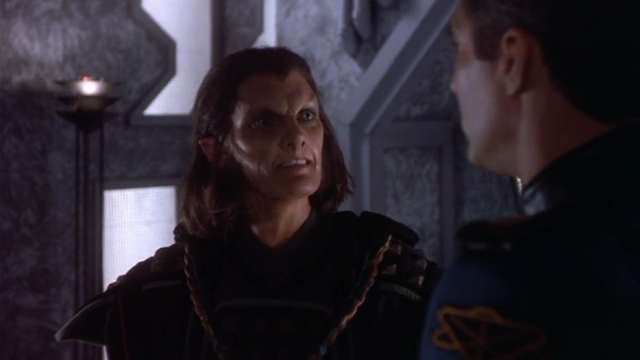 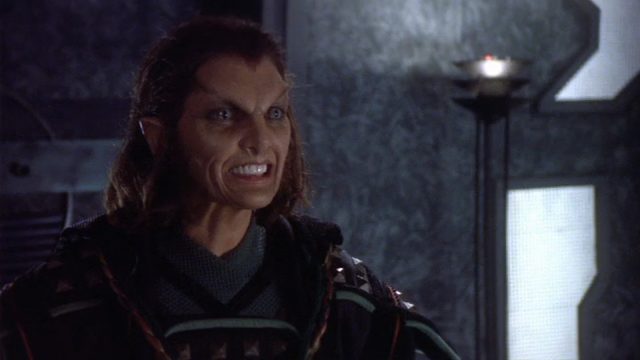 Sinclair is utterly disgusted by finding this out, but he's powerless to do anything about it.  He's sending her back to Earth, and he's promised that the League of Nonaligned Worlds can send a team of scientists to monitor her and then take her into custody once she's turned over her knowledge.  Not spoken, but implied: Earth would still want her even knowing what the cost would be.  So, one imagines, would the Narn or the Centauri.

In other words, Jha'dur is correct: she has just painted her masterpiece, and the wonder and terror of it will spill bloodily down the rest of time.

However, she's failed to reckon with one possibility: that there might be a race out there powerful enough to stand up to her.

And so, as the sad and defeated group of ambassadors and dignitaries left aboard the station gather and (implausibly) watch her ship headed for Earth, this happens: 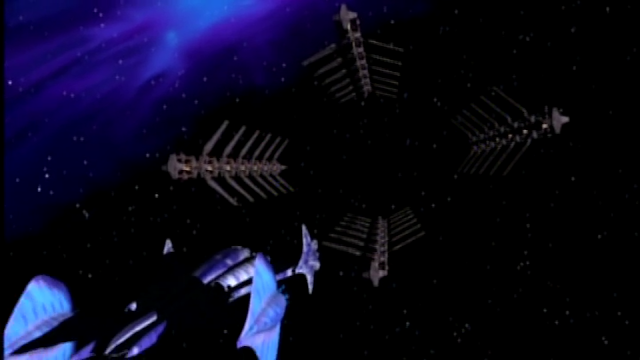 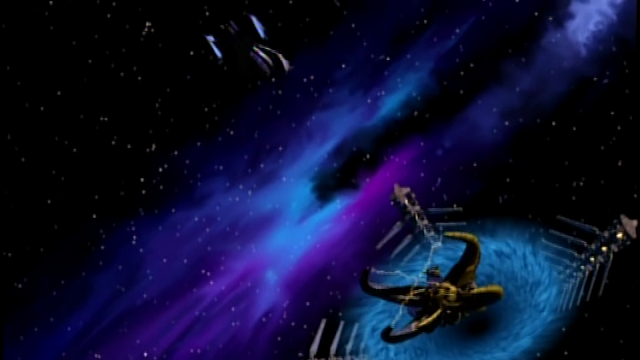 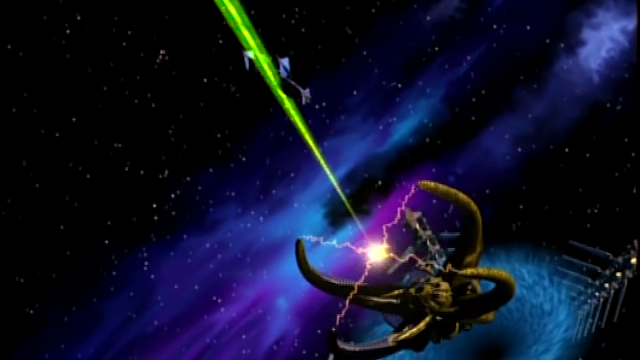 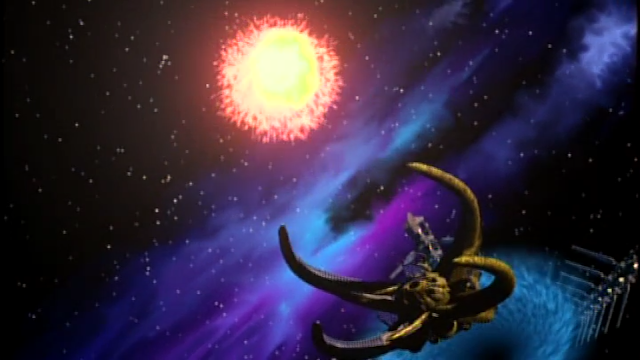 "You are not ready for immortality," says Kosh simply, turning and departing as suddenly as he has come.

It's a powerful moment.  The Vorlons have -- with the exception of being understandably angry over the near-assassination of their ambassador in the pilot episode -- been mostly window-dressing up to this point.  Kosh has been used sparingly; impactfully, for the most part (I'm thinking of him saying that the Narn and Centauri are dying races that should be allowed to pass), but also as a bit of an afterthought.  Heck, in this episode Kosh seems as though he's there for comic relief as much as anything else.

However, this resolution changes one's perception somewhat.  Are the Vorlons distant and unengaged?  Well, they seemed like it up until now, but this expedient development -- the swift execution of a brand of justice entirely unencumbered by the need for negotiation or political consideration -- belies their detachment.  They obviously will step in ... but only if they feel they need to, and perhaps only on a very large scale indeed.

This likely begs a question: how do the Vorlons see their role in the galaxy?  After all, they do not have an ambassador on Babylon 5 accidentally.  They made that decision consciously; and it seems it was not, in fact, a mere afterthought.

This might also cause one to reconsider some of what one has seen earlier in the episode involving Talia Winters.  In case you're unfamiliar with the episode, the endgame of Kosh's "negotiations" with Abbut were not to actually negotiate anything, but to use the vicker to record thoughts and feelings from Talia's mind.  Kosh -- or Abbut, perhaps -- prompts her to remember a mindscan in which she entered the deranged psyche of a serial killer.  The experience terrified her, and Kosh has now recorded that experience to some degree; "for the future," he tells Talia in way of explanation.  Well, holy shit, now, what does that mean?!?  Coming from a guy whose people just enacted frontier justice and deprived at least one race of potential immortality, that's ... kind of ominous, I'd say.

And if I were in an extremely generous mood, I might consider trying to make the claim that the wretched tackiness of Abbut is a rope-a-dope move on the show's part, designed to make one look in one direction with a disapproving smirk on one's face, while a heavy fist is descending upon one from another direction.  Is that possible?  Does the silliness that is Abbut actually make the Vorlon resolution to the Jha'dur problem more impactful?

It's not impossible, I guess.  I can't quite go there; but if you can, I'd not try to stop you.

How about some leftover screencaps before we zap outta this one?  Some of them might have mild long-range spoilers; fair warning. 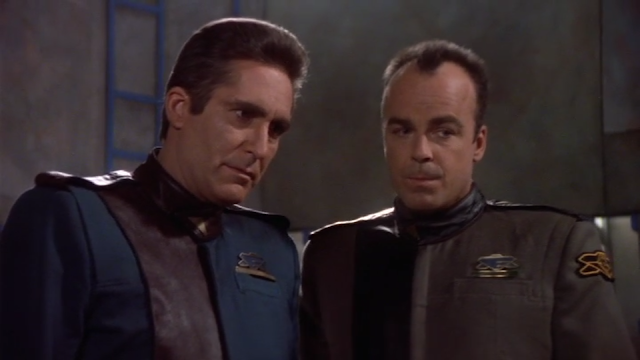 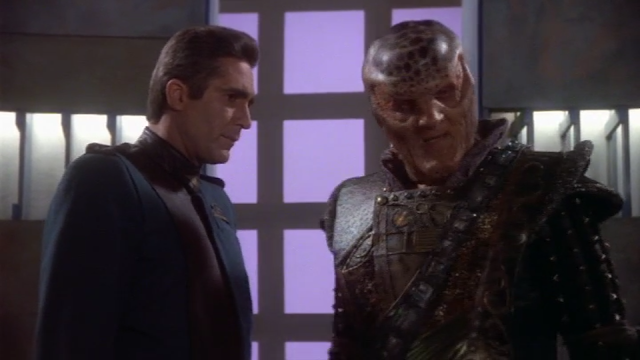 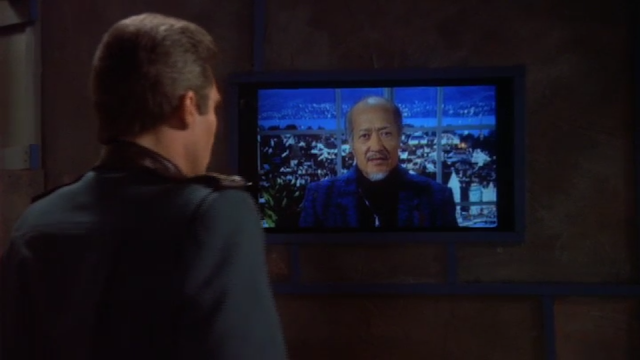 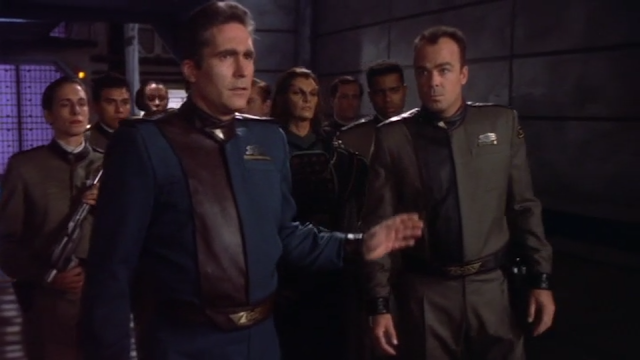 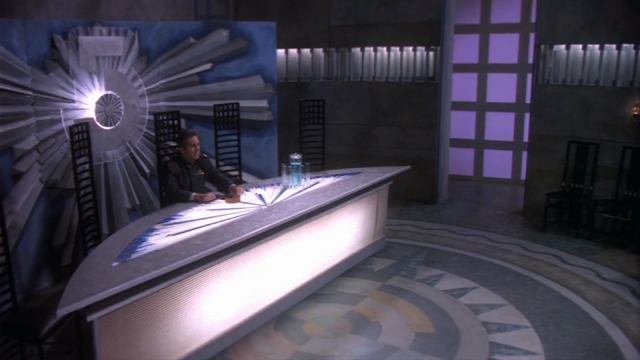 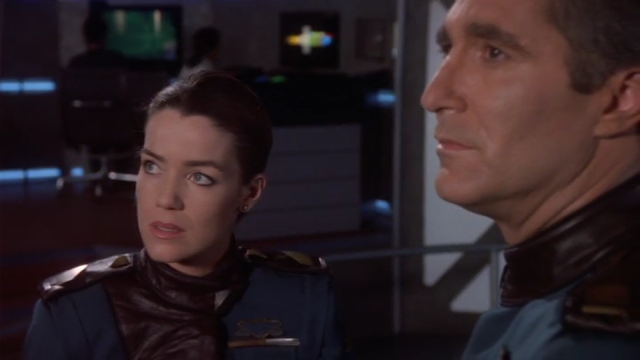 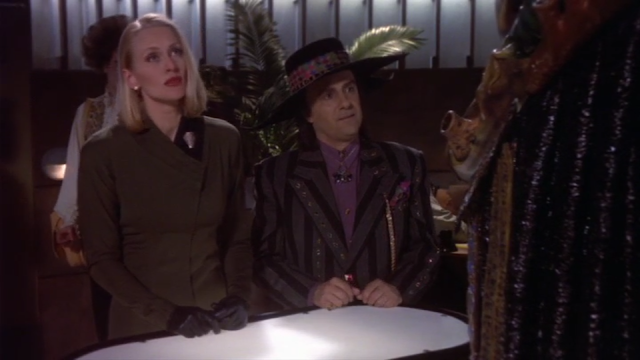 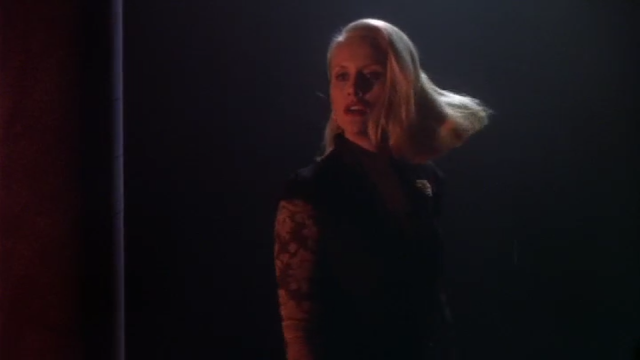 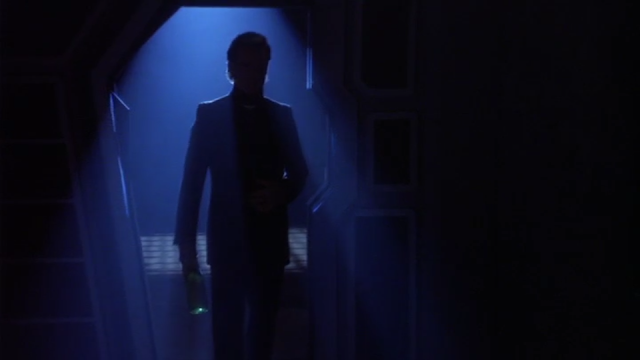 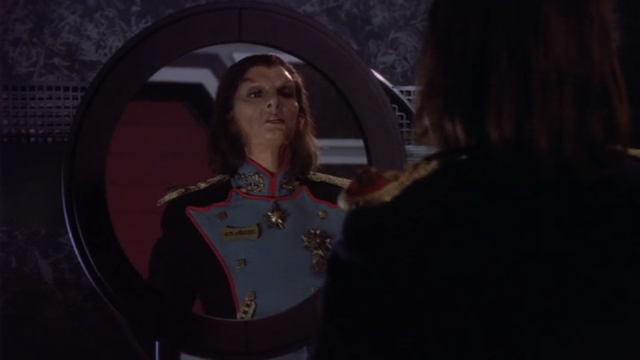 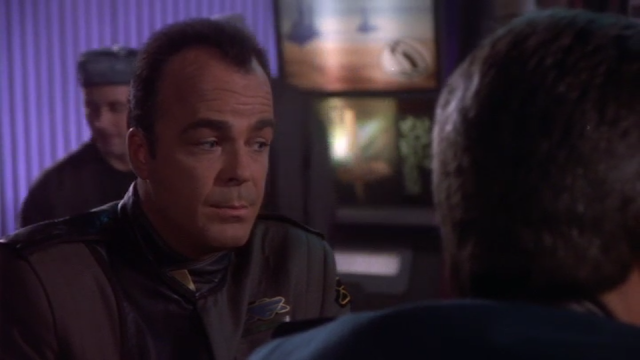