In Defense of "Star Trek: The Next Generation"

It's unplanned-post time.
Last night I watched this movie: 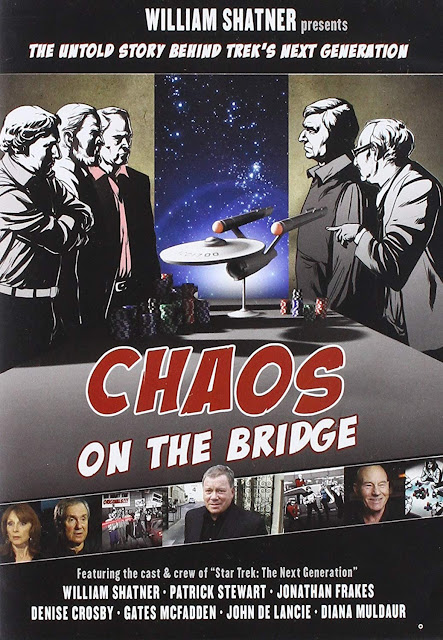 which, if you were unaware, is an hour-long documentary directed by William Shatner in which he interviews various people associated with the first three seasons of Star Trek: The Next Generation.  The aim of the film: to tell the tale of the titular chaos that greeted the launch of the second iteration of Star Trek on television.  (Third, if you count the animated series.)
It's a very entertaining documentary.  Shatner is a gifted interviewer; he gets a lot of great stuff from his interviewees, some of which is so good and so open that I'm a little shocked CBS (and/or Paramount) permitted the documentary to be released.  The cast members mentioned on the cover are only a scant part of the story; the real gems come from interviewees like John Pike (who was the then-head of Paramount's television division), Maurice Hurley, Tracy Tormé, Susan Sackett, D.C. Fontana, David Gerrold, Jeffrey Katzenberg, and so forth.
It'd be well worth my time to go through it scene by scene and give you my thoughts, but that's a thing time isn't going to permit.
However, I did find my brain a-blazing to some degree once it was done, and I want to put some of those thoughts down.

It's probably for this reason that I can't get onboard with some of what gets said during Chaos on the Bridge.  For example, there's a recurring theme that is likely to be familiar to anyone who has paid any attention to behind-the-scenes stuff about TNG: the old saw about how Roddenberry's admonition that the crew should get along and have no disagreements was restrictive and led to writers not being able to tell good stories.  You hear this from Ronald D. Moore, for example; and, very interestingly, you hear from his ostensible partner, Brannon Braga, that maybe that meant the writers simply needed to get more creative.
I'm on Braga's side.  So you can't figure out a way to work within Gene Roddenberry's guidelines, eh?  Well, pal, maybe you shouldn't be working on Gene Roddenberry's show.  Is that a crazy notion?  Take a job making pizza and tell the store owner you'd rather make subs; see how long you last there.  You being a writer doesn't free you of your obligations to do the fucking job you were hired to do, and to do it in the manner in which you were fucking hired to do it.  Get over yourself.  If your only way to be able to write Star Trek is to reinvent what Star Trek is, you shouldn't be writing Star Trek.
Elsewhere in the documentary, it is clear that Roddenberry's approach to intra-studio and intra-production politics did him no favors, reputation-wise.  It made enemies who are still trashing him over it to this day, and it may well be that he earned that.  Trek veterans D.C. Fontana and David Gerrold were essentially placed in positions of servitude to Maurice Hurley, a prickly television pro with literally no science fiction experience.  Why was such a thing done?  Apparently, it was mostly due to the destructive tinkering of Roddenberry's lawyer, Leonard Maizlish, who is painted to be the true villain of the documentary.
In the end, the picture I get is of Roddenberry being in declining mental (and, eventually, physical) health leading up to the beginning of production on The Next Generation.  I get the sense he sort of summoned all of his inner reserves in putting the concept together, and blasted forth a big and more or less final burst of creativity in doing so.  This, in retrospect, was his last hurrah: a vision of the future modified from the one he'd been exploring for decades by that point.  A vision of a future in which humanity had its act together, and didn't engage in petty squabbling, and focused on the big picture for the betterment of all.  Pie-in-the-sky thinking?  Well, yeah, sure.  But if you can't even imagine such a thing, then isn't that a shame?
Roddenberry could imagine it, and via The Next Generation, he gave untold millions of people the ability to imagine it, too, if only for an hour at a time.
And as his inability to oversee the project waned, the outside influences of those who -- consciously or otherwise -- proved unable to follow in Roddenberry's philosophical footsteps became more pronounced.  With them, ideas of what Trek was and should be began to change.  There were a few who kept the flames lit as best they could -- Rick Berman, Michael Piller, Brannon Braga, etc. -- but in the end, the concept began to buckle a bit.
Maybe that's as it was always bound to be.  But if so, for me it only makes those first two seasons shine brighter, flawed though they may sometimes be as productions.  This was the real deal, man.  And when I see -- or even think about -- those early TNG episodes, it takes me right back to being that kid on Saturdays.
Conventional wisdom be damned.  That's MY Star Trek: The Next Generation, and it always will be.  Me and Geordi on the bridge with our collarless uniforms, trying to evade the Ferengi while Dr. Pulaski gives Data shit and a beardless Riker goes on all the away missions so Picard doesn't have to.  Everyone gets along, more or less, because they're professionals and that's what professionals do, and anyways, it's in their nature.  They want to know what's out there; and they're not going to let a need for character drama get in the way of finding out what it is.
Make it so.
by Bryant Burnette at 5:28 AM