Previously on Babylon 5...
Tonight, on an all-new episode: Garibaldi is accused of sabotaging a docking bay in what may prove to be an assassination attempt on the life of Earth's President. 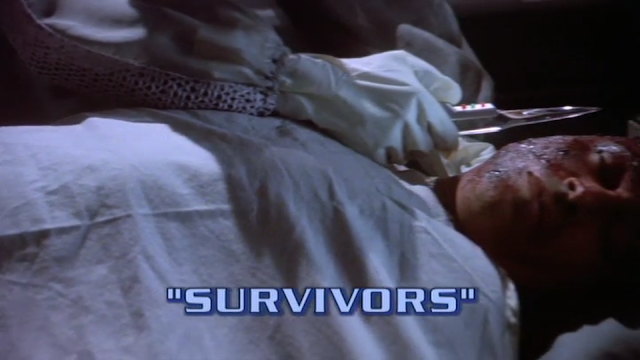 (season 1, episode 11)
airdate:  May 4, 1994
written by:  Marc Scott Zicree
directed by:  Jim Johnston
This episode is a standalone tale on the face of things, involving Garibaldi's efforts to clear his name in a wrong-man scenario resulting from an explosion in one of the Cobra launch bays.  This happens several days before a visit from Earth's President, which means the equivalent of the Secret Service gets involved in the investigation.  One problem with that: the head of the President's security force is a young woman with whom Garibaldi shares a dark past.  She's predisposed to think the worst of him, and think the worst of him she does.
This leads to some good stuff, and to some bad stuff, but (as with "Believers" last week) I think the balance is more toward the good than the bad and the end result is one of the best episodes yet.


Let's start with the good.  This is a character piece in which Garibaldi is front and center.  He's been a consistent presence throughout the season, sometimes as comic relief and sometimes as a reminder of the show's values, and sometimes as a bit of both at once.  We've heard a bit about the fact that he has a troubled past, and about how Sinclair appointing him chief of security was not a popular decision politically.  Some of that pays off now, as we find out about an incident from Garibaldi's past involving a friend who died as the result of enemies made during Michael's drinking days.  Garibaldi has been struggling with alcoholism ever since; he's been out of the bottle for some time now, and has been successful in his job on Babylon 5, but this new crisis drives him to drink again.
I would argue that the episode's best scene in the one in which Garibaldi, on the run from Lianna's security guards, ducks into a bar tucked away in some corner of the station where, clearly, only the refuse go. 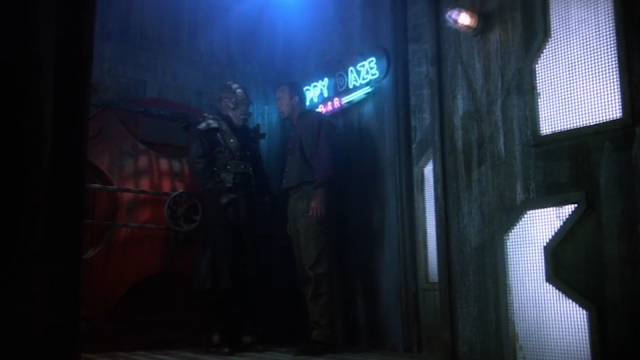 He sidles up to a table where a seedy-looking alien is sitting, and the scene turns into a gag in which Garibaldi buys the man's hat off of him so as to better hide from the security guard who is hot on his heels. 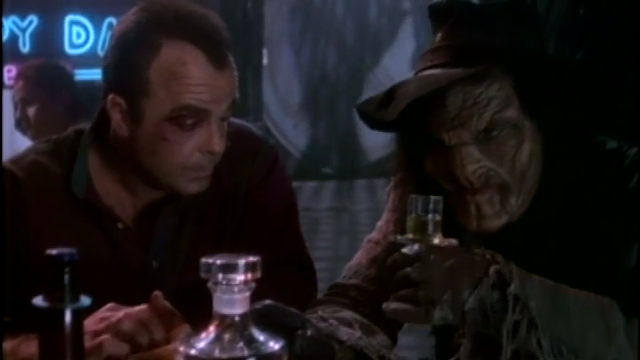 Throughout the episode, Garibaldi has been in the presence of people who are drinking.  Even before the scene in which he tells Sinclair his history with the bottle, he's got it on his mind.  "Man, I need a drink," he says early on after an upsetting runin with a thief in the Zocalo.  He proceeds then to order a "water, straight-up," in what I assume is a rueful little joke to himself.
We've actually seen Garibaldi around drinks a few times during previous episodes, going as far back as "The Gathering."  We've been building to this subplot.
So it's not automatically alarming to see the bottle sitting in front of Garibaldi and the alien in the screencap above.  Drink has been part of the background for Garibaldi pretty consistently; I'm guessing most viewers won't take it as much more than that now.  But then, after Michael returns the alien's hat, the alien pushes the subplot forward.  He's surprised to be given back the hat, for which he has already been paid, so he does what he likely thinks of as a generous thing: he tells Garibaldi to take the bottle instead, and staggers his way off ("I go casino," he says amusingly).
Jerry Doyle is really good in these moments.  You can see Garibaldi's focus shift to the bottle, but in a way that suggests to me that it was partially on that bottle all along.  This is not a surprise, nor is it a new element in the scene for Garibaldi; this is an inevitable thing finally occurring. 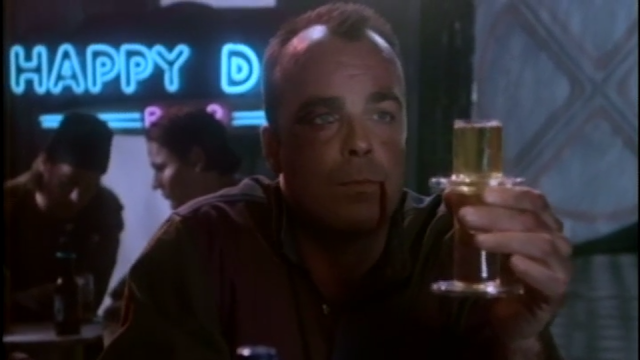 Christopher Franke's score complements Doyle's performance nicely; the music is subdued but insistent, and is basically a single, consistent piece with a singular throughline during the entire scene.  It mirrors what must be going on in Garibaldi's mind, and is an excellent example of a musical score furthering the story.  I'd love to know if Franke was directly inspired by Doyle's performance, or if they were instead coincidentally on the same page.  Or, perhaps, something in the screenplay (or the direction) steered them toward the same result.
Either way, it's probably the episode's highpoint for me.
Another highpoint comes in the scenes between Garibaldi and Londo.  Being, as he is, a man on the run with very few people to turn to, Garibaldi seeks out Londo for both help and information, both of which the ambassador is happy to provide.  He's a bit untrustworthy, Londo is; but he does genuinely have an affection for Garibaldi, and tells him why.
"We are alike, you and I," he explains.  "We are both, as you say, the odd man out.  I have been in your place.  I can feel how you are pinned.  And it would give me some small pleasure to know that things can work out.  Even for us."
Meaning, of course, "even for me."  Peter Jurasik is good in this scene, a thing I've not been able to say very often thus far in this series of posts.  but here, he's very good, and it put me in mind of something that I should probably defer to a spoiler section later on.  But I won't, because it's not that huge a spoiler; and anyways, I'm not going to be specific.
But it struck me, hearing Londo vocally hope for things to work out, that here is a character who is only two episodes away ("Signs and Portents" looms) from a moment that will more or less end forever the possibility of things working out well.  In fact, he may already have passed that point.  The plotline with Adira in "Born to the Purple" can be seen as the last gasp of happiness for this sad man; I wish that were a better episode, so I could look back on it with fondness as precisely that type of a turn in the storytelling.  I guess it still kind of works, and heck, if you want to you can probably say to yourself that Londo's point of no return happened at some point prior to the series even beginning.  What we've been seeing is a man trying -- loudly, garishly, annoyingly -- to convince himself that Things Might Still Turn Out Just Fine.
What we will see for the rest of the series is a man who is first beginning to know that this is not the case, and then knowing it for a fact, and then fighting it, and finally accepting it.  Londo is a fascinating figure, and this seemingly incidental moment with Garibaldi might be the moment in which the show truly begins to put that to proper use. 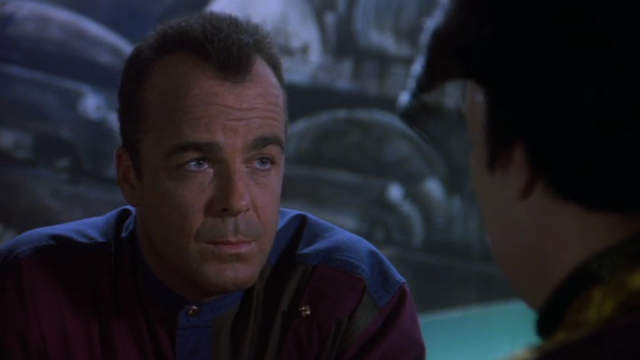 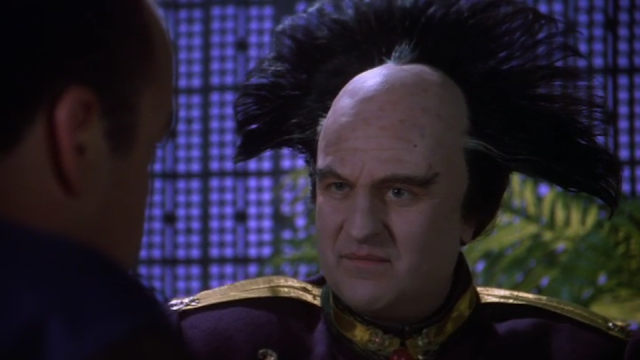 Lest I wax this episode's hood too much, I should mention that there's also some stuff that doesn't work.  Let's get into the remainder of my screencaps, which I think will allow me to get into some of those criticisms, as well as some of my other compliments. 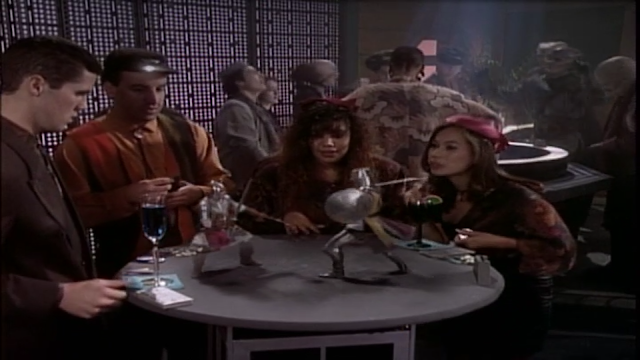 Alright, that screencap above, I took it because I wanted to point out two things.

First: those are actually pretty good effects.  It's kind of a silly Star Wars ripoff/homage, but focusing on the effects themselves, those really do look like tiny men who are on that table.  It isn't that; it's a video feed of some sort in holographic form; but it's very convincing, in my opinion.

Second: for some reason, the aspect ratio here has gone crazy.  Babylon 5 was broadcast in 4:3, but was filmed in 16:9, and DVD and streaming versions use the 16:9 versions.  THIS scene, however, is 4:3 that has been stood upon by someone heavy enough to (metaphorically) squish it down into a 16:9 shape.  Thanks to the magic of VLC Media Player, here's what the same shot looks like in 4:3 a few moments later: 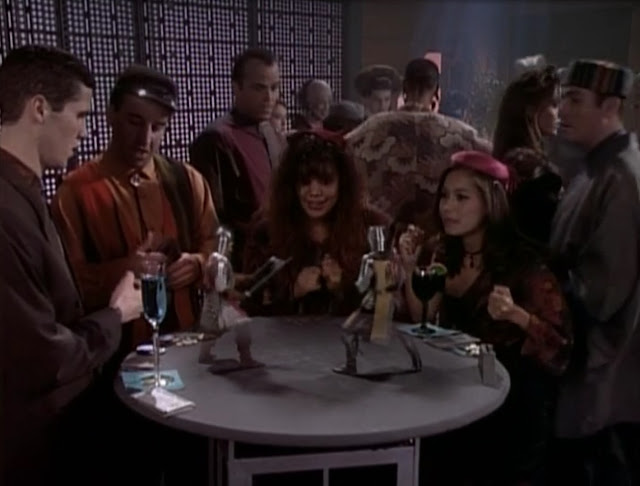 Can you tell the difference?  I'm not assuming you can; a lot of people can't.  My parents, for example, have zero ability to tell the difference.  I have nearly zero ability to comprehend how that can be, but there you have it.  And I've talked to many, many people over the years who just cant tell.  I don't mean in relation to this episode of Babylon 5, I mean in relation to being in public and seeing a television that has its settings screwed up; stuff like that. 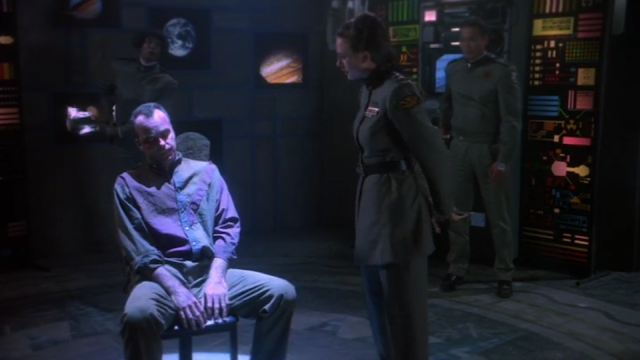