There Are More Important Things in Life Than the Next Breath: Babylon 5, ''Believers'' (season 1, episode 10)

Previously on Babylon 5...
Tonight, on an all-new episode: Dr. Franklin's oath to do no harm comes into conflict with a family of aliens who refuse to allow him to operate on their son. 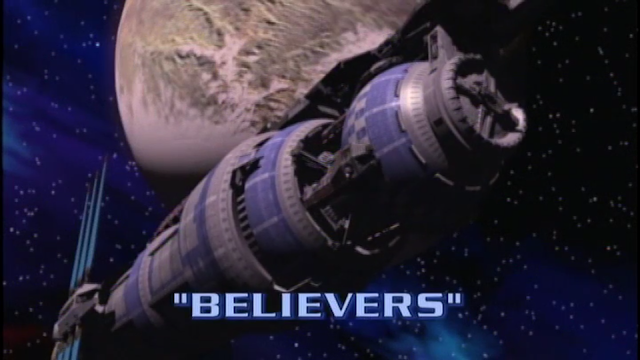 (season 1, episode 10)
airdate:  April 27, 1994
written by:  David Gerrold
directed by:  Richard Compton
Here's an episode that was designed by all involved to be a button-pusher.  In some ways, it's a swing-for-the-fences attempt to both replicate and reject (by furthering and intensifying) the sort of ethical-conundrum episodes that had been the occasional forte of Star Trek and Star Trek: The Next Generation.  Heck, Straczynski even assigned the episode to David "The Trouble With Tribbles" Gerrold!
The setup: a family from an alien race brings their ill son aboard the station to see Dr. Franklin, whose skill with operating on a plethora of races has spread far and wide.  Their child has a blockage in his airway and is slowly drowning on his own fluids.  Franklin examines him, determines that indeed yes, it is quite serious, but fixable with surgery.  With what now...? ask the parents (I'm paraphrasing).  You're going to ... cut into him?!?
That's a deal-breaker.  Their religion believes that the region where the blockage is -- an air bladder of sorts -- houses the spirit.  To cut into it would be to deprive the boy of his soul, and of his life eternal.  This is a fate worse than mere death; it's a complete non-starter.
Franklin, being the man of science he is, is completely aghast at this, and asks Sinclair to step in and (for the boy's own good) order the surgery anyways.  Sinclair then has to wrestle with the ethical and political implications of such a move; it could theoretically end the station's neutrality.  But it might also be the right thing to do; or the complete wrong thing to do.  It's kind of a pickle.


And hell, I guess I'll go ahead and briefly summarize the resolution, too.  Sinclair, after talking with the boy (who says that while he wants to live he also doesn't want to have the operation and lose his soul), declines Franklin's request.  Franklin, feeling his oath outweighs all other considerations, performs the operation anyways.  It is a complete success, medically; and when the parents see their son, healthy and fit and energetic, they recoil in horror. 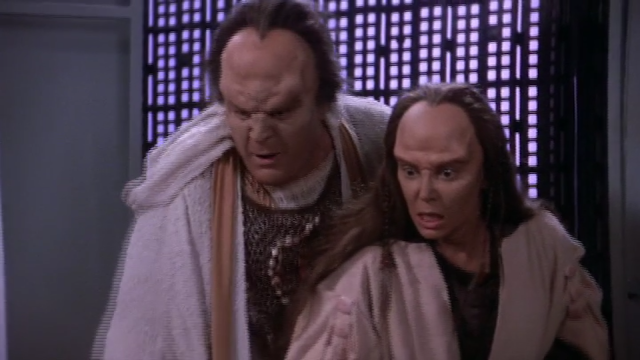 This is not their son; this is some devil in their son's former shell.
Eventually, they take their son out of Medlab to get him ready for the journey home.  Which in their case, means a mercy-killing in a candlelit ritual. 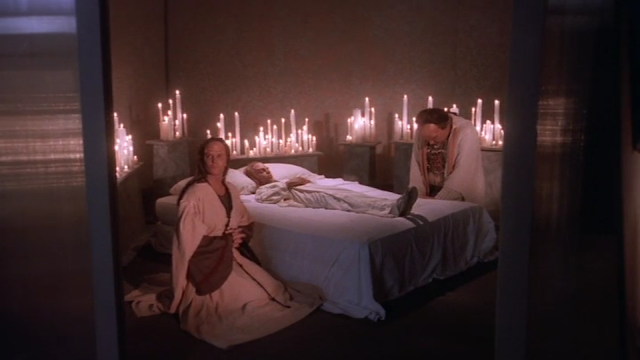 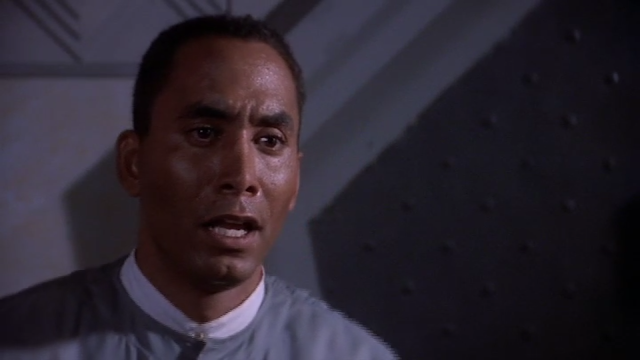 As the episode leaves him, Franklin is left in torment over the futility of it all.
It's an ambitious episode, and I'd say it works more often than not.  Dare I mention that certain aspects of the production don't quite work?
Dare I not...?  I mean, that's Babylon 5, certainly in this first season.  Does some of the acting suck?  Yeah, sure does.  The kid playing the alien son is iffy at best; the actress playing Franklin's heretofore-unseen assistant is even worse.  Michael O'Hare has his requisite dodgy moments.
He's also got some good ones, though, and I'd say Richard Biggs as Franklin is mostly quite good.  We also get meaty one-scene bits for G'Kar, Londo, and Delenn; an occasionally fun subplot for Ivanova involving rescuing a stranded passenger liner under threat from raiders; and, happily, good performances from the two actors playing the alien parents.

Interesting stuff, for sure.  The episode is not free from problems, but even so I think this is handily the best episode of the series through its first ten.
I'll go ahead and give you my rating now, and then we'll check out some screencaps.
Bryant's rating:  *** 1/2 / ***** 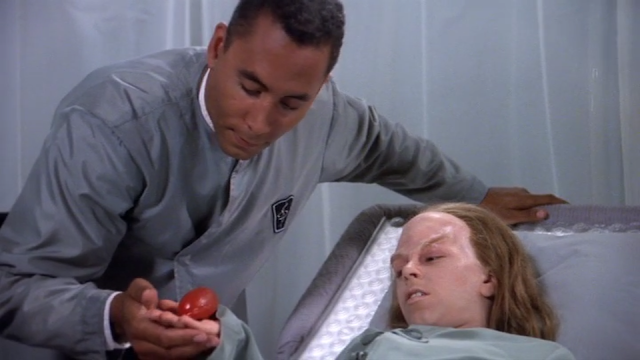 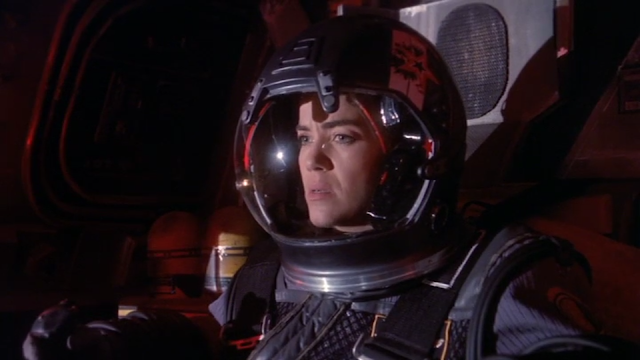 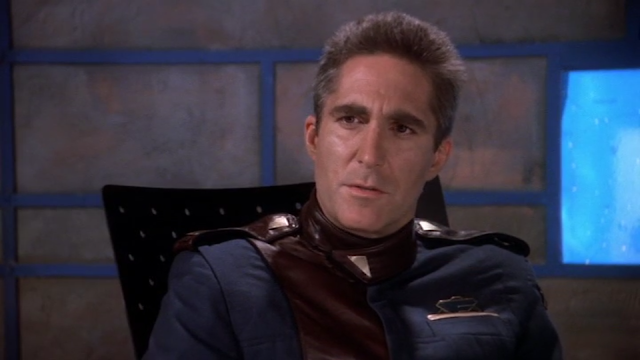 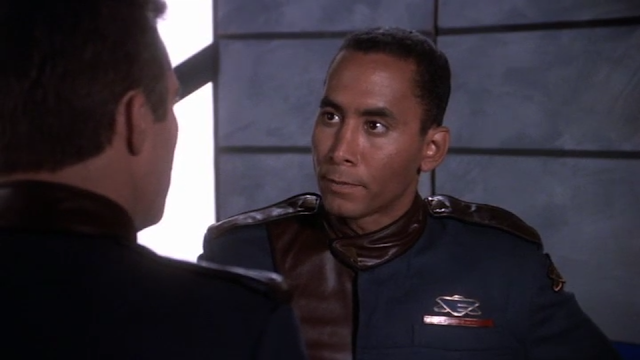 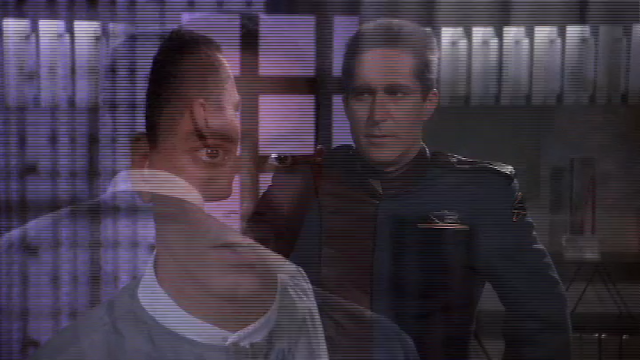 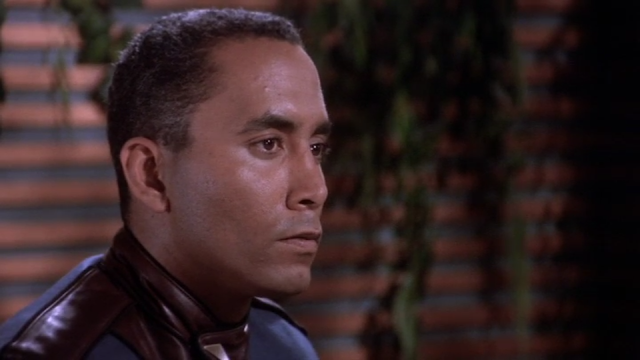 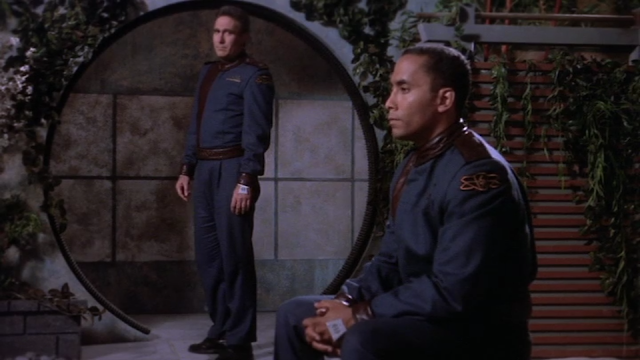 Hey!  I almost forgot to give the context for the title of this post.  "There are more important things in life than the next breath," Shon's father says.  "Without his spirit, he wouldn't be alive anyway."


I should also mention one of the worst moments: "In the name of the Egg and the Nest in which it resides," whimpers Shon after his parents curse at him and flee.  Then he begins singing in what sounds to me like Ewokese.  The episode goes a wee bit overboard in the wacky-alien-language department.  Which makes it weird that everyone is just speaking English, but that's a thing we can't afford to dwell on; or even remember, quite frankly.
Oh...!  And here's a great scene, which comes after the parents have seemingly accepted the post-op Shon and have told Franklin they understand why he did what he did.  This is what happens between the doctor and Sinclair next:

And, finally, a note about something Franklin says to Sinclair during the scene in the zen garden.  "Maybe we'd all be better off if there was no God ... if God had never been invented," the doctor says.

I can't help but put this in the context of the overall series.  As such, it's kind of a wowser line.

As for the episode itself?  I suppose it's a bit of a wowser, as well, in some ways.  I think that three-and-a-half I gave it is about right; but many fans of the show would likely rate it higher, and I don't much blame them.

See you next time!
by Bryant Burnette at 8:04 AM