Previously on Babylon 5...
Tonight, on an all-new episode: an Earthforce Internal Investigations (II, "eye eye," "eyes") arrives onboard the station with an axe to grind and a Psi Corps agent to help him do it. 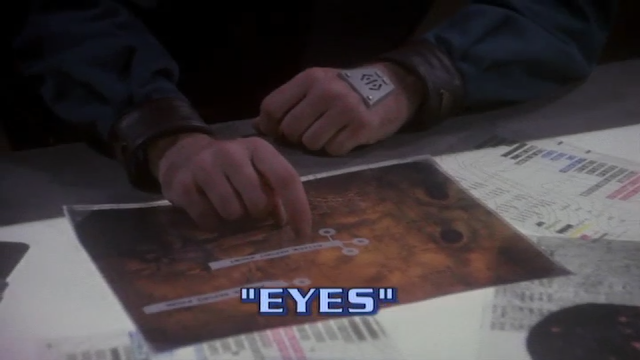 (season 1, episode 16)
airdate:  July 13, 1994
written by:  Lawrence G. DiTillio
directed by:  Jim Johnston
The axe the "eyes" agent has to grind: he believes Sinclair and his command staff to be disloyal to Earth.  He's obtained the permission of the joint chiefs of staff to conduct an investigation determined to prove it, up to and including using not-entirely-legal telepathic mindscans.  He'll be questioning many of the decisions Sinclair has made during the season to date: the resolution of the Ragesh 3 incident, the Deathwalker affair (and especially Sinclair's failure to press the Vorlons* for an explanation), and most especially the reallocation of military funds during the events of "By Any Means Necessary."
It's basically a continuity explosion, and while none of this seems exceptional from a 2019 standpoint, it's important, I think, to remember that you didn't see such things all that often on television in 1994.  It was by no means unheard-of; but it certainly caught one's attention.

* -- By the way, it's Ben Zayn's reproachful questioning of the Vorlon/Deathwalker thing that provided me with this post's title.  Ben Zayn is asking Garibaldi to explain Sinclair's non-action.  Why didn't he at least formally protest their actions?  "Protests are as much use with the Vorlons as fairy wings on a cement truck," replies Garibaldi, with an implied fuck-you.  (He has a lot of those this episode, and Jerry Doyle does well with them.  After this moment, Ben Zayn -- who has him burning the midnight oil -- cuts him free for the night.  "If I knew who God was, I'd thank her," he deadpans.)
All of this results in a better episode than I remembered; not one which is going to knock the socks off most viewers, I'd imagine, but solid.  With caveats, yes; but solid.


Let's briefly discuss some behind-the-scenes info that helps to put the episode in context.  It was written from scratch in five days when the production suddenly had the need for there to be a bottle episode.  Apparently, an unnamed freelance writer fell through on delivering a script in time, leaving a gap in the schedule.  Straczynski was at home with the flu working on the two-part episode "A Voice in the Wilderness," and so DiTillio was tasked with coming up with something new on the fly.
So says Jane Killick in her season-one-overview book Signs and Portents, at least.
Add to that this: the two-part episode "A Voice in the Wilderness" ended up costing more money than expected, so there was a need to save money elsewhere.  (This is a slight fudge of the truth on my part; in actuality, Warner Bros. had suggested that "A Voice in the Wilderness" be turned into a two-parter so as to save money on set construction.  That money was expected by the production to be available to move over to other episodes; this ended up not happening.  So it seems to me based on Killick's book, at least.  Alternatively, it might be true that the episodes ran over, and ate up the expected overruns.)
This resulted in "Eyes," which is essentially a series of scenes of people in rooms talking to one another.
Including these people: 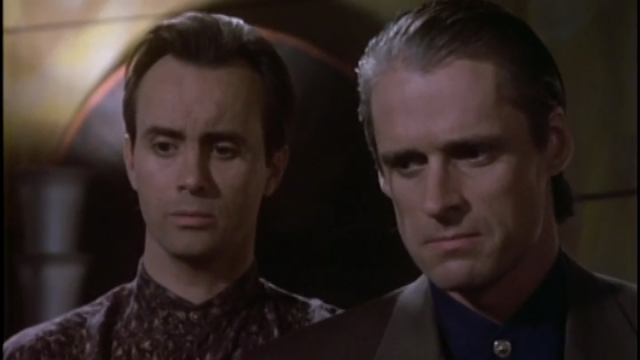 The guy on the right is Colonel Ari Ben Zayn, the II officer.  He's played by Gregory Paul Martin, who is evidently the son of George Martin, the Beatles producer.  What I'll say about Gregory Paul Martin is this: he's no Abbey Road.  He's no With The Beatles, even.  What he is is hammy, in a manner not dissimilar to the guy who played Orin Zento in "By Any Means Necessary."
I'm not sure it hurts this particular episode all that much, though.  Ben Zayn as a character is supposed to be a despicable, confrontational prick, and Martin executes that.  He's playing to the back row, and I think he lacks only a black hat and a mustache to complete his ensemble; but you can kind of imagine him having been a successful wartime military officer.  Orin Zento, you can't imagine as having been anything but a guy hazing nerds at a college fraternity.  You get that from Ben Zayn, as well, but in just enough a more believable manner to make it work. 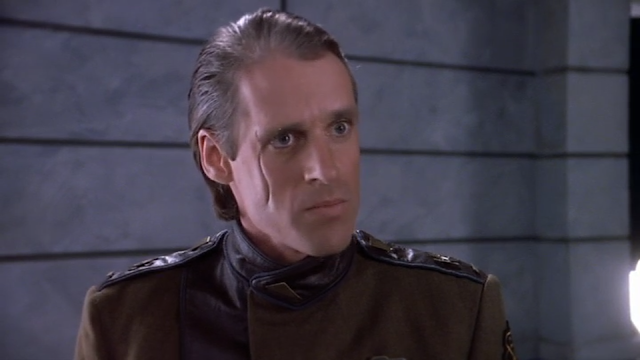 Your mileage may vary, of course.  If you hear a single sentence come out of this guy's mouth and decide to bail out of the episode, that wouldn't surprise me overmuch.
The other guy?  That's Harriman Gray, the Psi Corps agent who has been assigned to Ben Zayn -- by our old friend Bester, as it turns out -- for the investigation.  And yes, that is indeed Jeffrey Combs playing the part.  He's great here.  Duh.  Sadly, he never comes back for another episode; not that this one creates that expectation, necessarily.  He would go on to do 33 episode of Deep Space Nine (and, later, eleven of Enterprise); so in the great DS9-versus-B5 war, DS9 won the battle for Jeffrey Combs.  B5's loss, for sure! 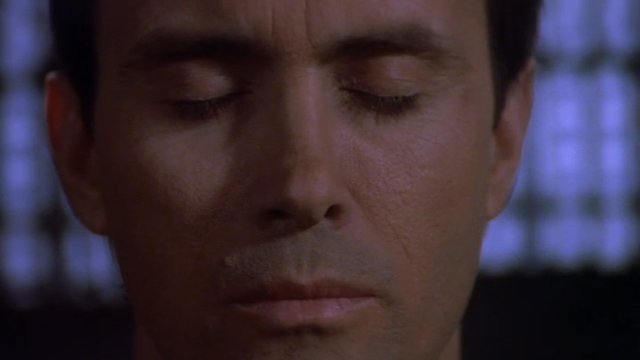 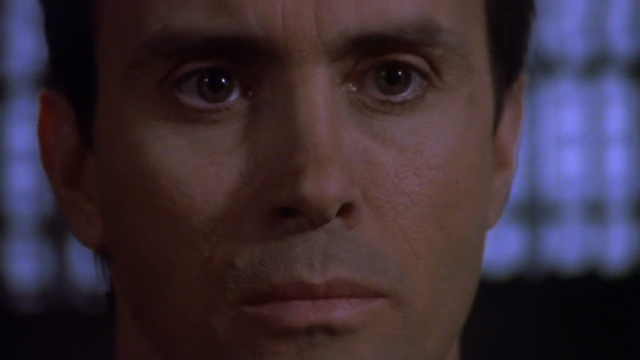 Gray's status as a Psi Corps agent is a pivotal part of the episode.  From the get-go, he's shown to be a much more sympathetic and caring individual than Ben Zayn; he's clearly not fully onboard with what the Colonel is doing, and just as clearly wants to make friends with Sinclair, Garibaldi, and (especially) Ivanova. 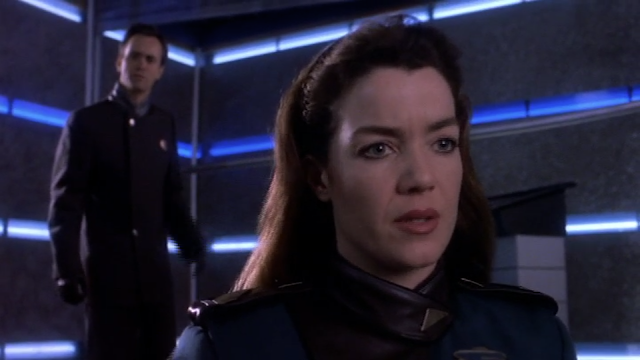 Since he's got access to her Psi Corps file and is going to presumably be questioning her, Gray has done his homework on Ivanova.  Not in the creepy way, either.  There'd be a way to play this episode in which his interest in her was leering or even romantic (he could have, in theory, developed a crush on her like the one Tatiana Romanova was alleged to have developed on James Bond).  Instead, he's merely sympathetic toward what happened to her and her mother; this sympathy opens him up to Ivanova, and he confesses to her his disappointment with Psi Corps having pulled him out of his own intended life.  He'd gone into Earthforce because of a lifelong love for the military; when his psi abilities presented, he was pulled out of that service and into another.  So in his own way, he kind of understands what's happened to the Ivanov family.
Ivanova herself will have none of this, of course.  She is intent on refusing to permit Gray to scan her, and expresses almost nothing but disdain for him. 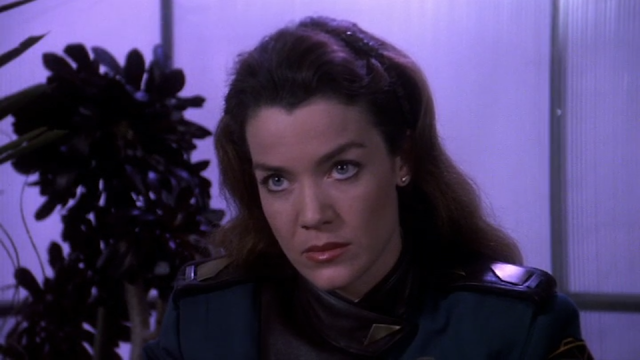 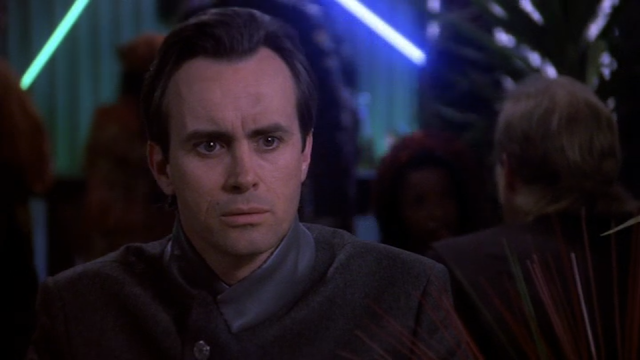 All of this is fairly good.  Claudia Christian and Jeffrey Combs both do well with the material; Combs is probably a bit better than Christian, true, but you can sense Christian upping her game a bit to keep pace, and I think it works.
Much of the episode consists of a sort of chess game between Sinclair and Ben Zayn.  The Colonel orders Sinclair to submit to a "loyalty test" in the form of being mindscanned during questioning; Sinclair refuses, citing specific military laws which protect him.  Ben Zayn brings specific charges, which open Sinclair up to having to submit; and in the interim, Ben Zayn assumes command of the station. 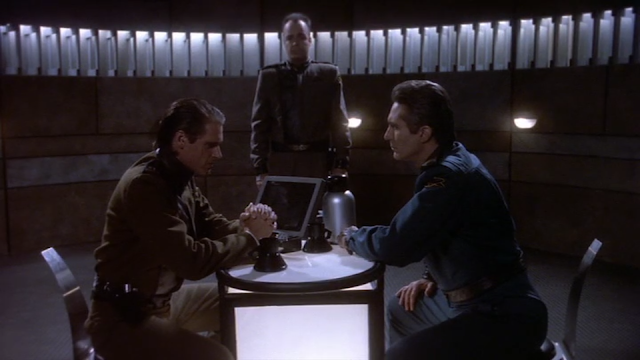 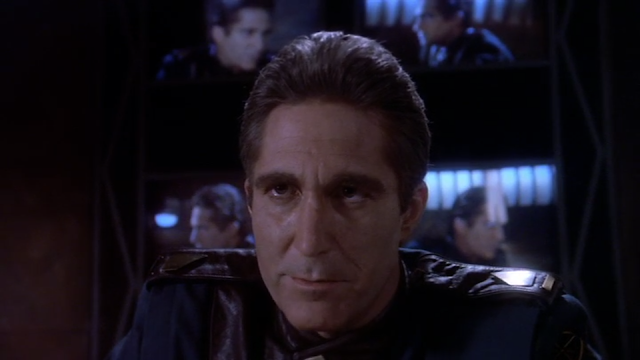 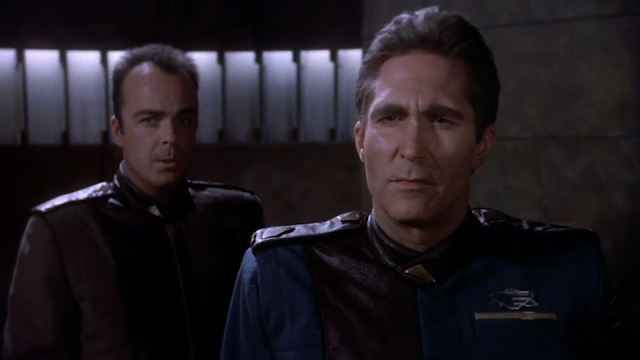 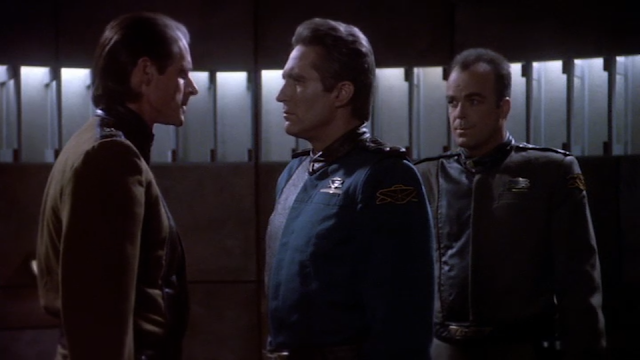 He has a few ropey moments, but I think Michael O'Hare is generally quite good in this episode.  Sinclair's indignation and anger come through pretty clearly.  But you also cheer him every time Sinclair gets the upper hand, which he finally does in a somewhat James T. Kirkian fashion: by finding the weakness in the room and exploiting it for all it's worth.
Specifically, he uses intel Garibaldi provides him with: that Ben Zayn (A) is miffed from having been passed over for command of Babylon 5, (B) is miffed by Sinclair's mysterious relationship with the Minbari, and (C) is a good friend of Bester, who has encouraged and enabled this gambit so as to help both of them get some retribution.  Sinclair puts this together with the seemingly benign attitude of Harriman Gray, and makes a simple suggestion: are you sure you're mindscanning the right people?


Nothing Earth-shattering here; but Ben Zayn is so despicable that it's aggravating fun to watch Sinclair suffer for a bit before finally taking him down.  And Jeffrey Combs does a lot with his role, not merely for this episode, but arguably for the entire series.  Spoiler alert: telepaths become an even bigger deal on Babylon 5 than they already are by this point.  I wouldn't care to say whether this is purely from an antagonistic standpoint; but I will say that there's certainly a lot of reasons for the presence of obviously "good guy" telepaths like Harriman Gray to be a positive influence on the trajectory of the overall series.
In a better world, he might have come back and spared us from Byron.  (We'll get there, eventually.)
Elsewhere in the episode: a subplot in which, I shit you not, Lennier helps Garibaldi build a vintage Kawasaki Ninja motorcycle. 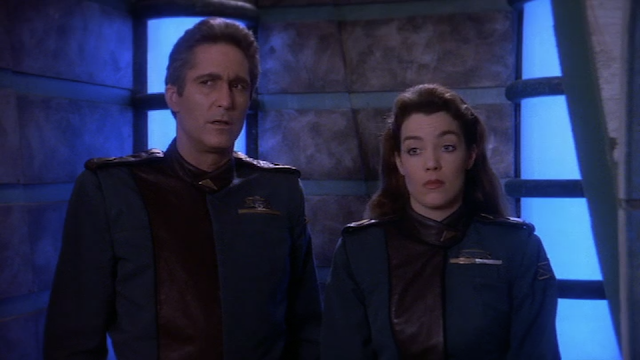 It's a pretty terrible subplot, but it's also kind of harmless.  There are many, many worse things in season one of Babylon 5 than this.
A few stray notes I failed to fit into the meat of the post:
And, finally, a few screencaps I didn't use: 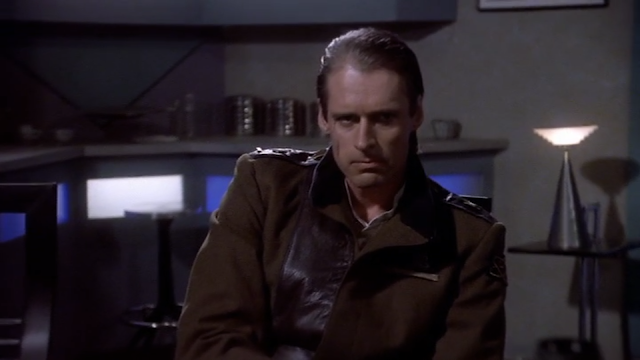 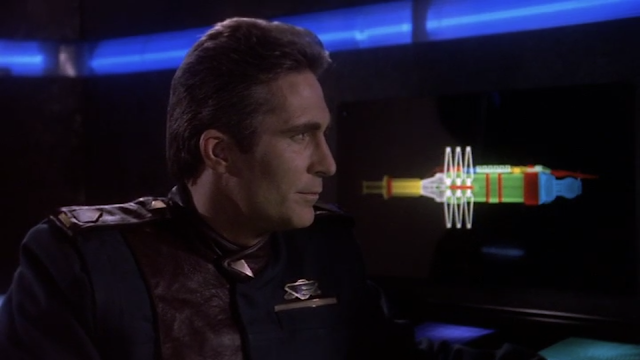 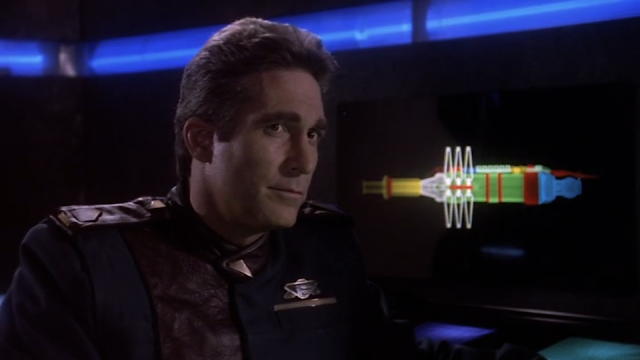 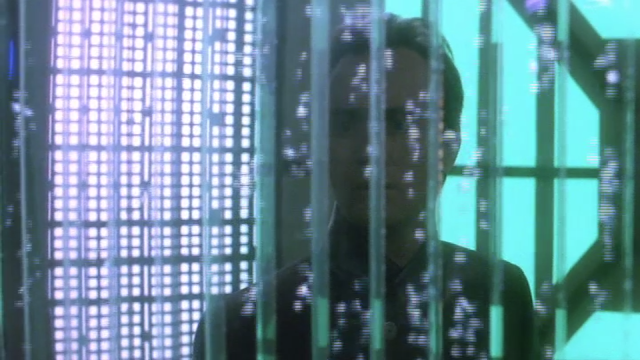