Tonight, on an all-new two-part episode: the discovery of remnants from an ancient civilization on the planet which Babylon 5 orbits prompts a military standoff over who has the rights to exploit it.  Meanwhile, violence erupts on Mars and Garibaldi is unable to determine whether an old flame is safe from it. 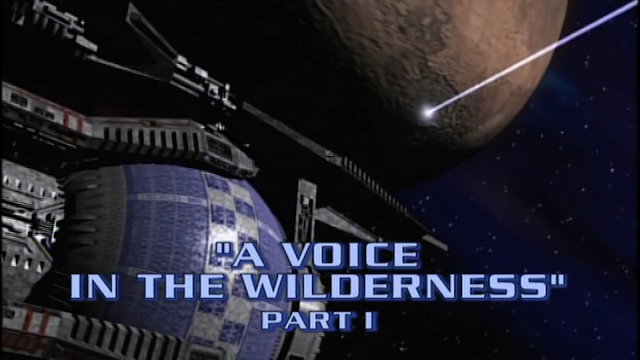 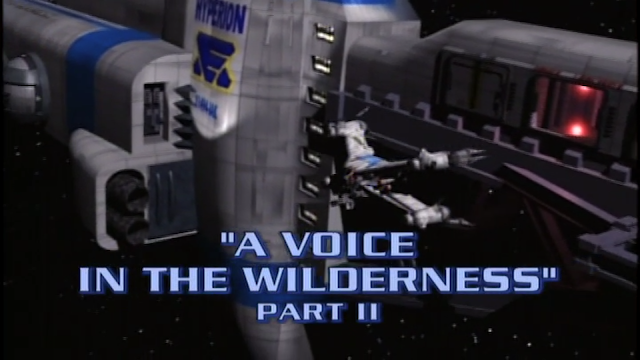 
For its first official two-parter, Babylon 5 turned its attention to a mystery that had been kind of right out in the open.  We've seen that the station is orbiting the planet Epsilon III; it's probably been visible in every episode.  But rarely, if ever, has it actually been mentioned.  Now, we find out why: it's a dead world, completely uninteresting in every way.

Until unexpected seismic activity prompts a survey team to try to visit it, that is.  When they do, a beacon of some sort is activated, and not long after that a series of defensive rockets are launched.  By whom?  Are there still people on the planet?  More correctly, in the planet; the rockets -- and the beacon -- came from miles under its surface.

That's not a bad setup, I'd say.  And in the end, I like both of these episodes just fine.  I'm not sure enough actually happens to justify this being two episodes as opposed to one, though, and indeed it seems as if maybe it had to be filled out with a story in which violence breaks out on Mars.  In this side plot, the Free Mars movement gets up to bloody dickens, prompting Earthforce to cut off all communications with the planet.  Garibaldi, as it turns out, has an old flame back there; he is so desperate to find out if she is safe that he turns to Talia for help, asking her to contact the not-as-secret-as-they-think-they-are Psi Corp training facility on his behalf to see if they can do anything.  They can't, and aren't happy about having been asked.

All of that stuff is pretty good, too, and I like the way the two plots help to keep the tension ratcheted up throughout.  And yet, I'm still not convinced there's enough here to justify this being a two-parter.


In my particular case, though, I find that I don't much mind.  We've reached the point in the first season where the show is beginning to feel comfortable in its own skin.  Not everything works here; Ivanova's I-sure-am-Russian schtick has officially worn out its welcome, and her comical exasperation (showcased at least twice) doesn't work too well here, either.  Plus, there is -- I shit you not -- a scene in which Londo recites the lyrics of the "Hokey Pokey" song to Delenn, and while I wish that was a thing which had never happened, it DID happen, and we are all the poorer for it.  (Peter Jurasik, in Jane Killick's book about season one, indicates that he himself felt much the poorer for it.)

Let's move into some meditation upon the episodes themselves: 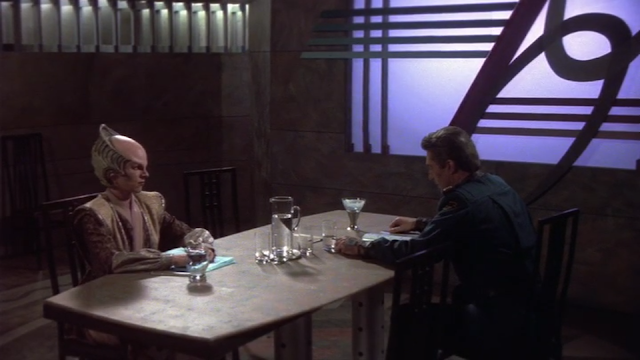 This comes after a scene in which Delenn and Londo have reached a diplomatic agreement over trade routes.  Delenn has gently chided Londo after he expresses relief at the non-presence of G'Kar, whose presence would have presumably made the negotiations more difficult.  She admits that G'Kar is angry more often than not; "but even the greatest anger fades with time," she says, suggesting that Londo exercise more patience.

"They will do all that they can to destroy us," Londo retorts, "until the universe itself decays and collapses.  If the Narns all stood together in one place and hated all at the same time, that hatred could fly across dozens of light years and reduce Centauri Prime to a ball of ash."  Sinclair points out that the Centauri don't have to respond in kind.  "Of course we do," says Londo.  "It is a natural law; physics tells us that for every action there must be an equal and opposite reaction.  They hate us; we hate them; they hate us back.  And so, here we are: victims of mathematics."

I rather like Londo -- or, at any rate, Peter Jurasik AS Londo -- in these episode, abysmal hokey-pokey interlude notwithstanding.  Jurasik is less shrill than usual; less boisterous.  The boisterous side is by no means absent, though.  It pops up a few times, including during a scene with Garibaldi in which he tries to cheer the security chief up while he's feeling down about the situation on Mars.  But overall, this Londo seems like a more content and focused man than we've seen for most of the season.  Is this the result of the (seeming) good fortune that came to him at the end of "Signs and Portents"?  It feels that way to me.  Londo feels less desperate here, and as a result, he feels more competent, more honorable, less aggravating.

In another of the episode's subplots, Delenn is visited by Draal, her former teacher and mentor. 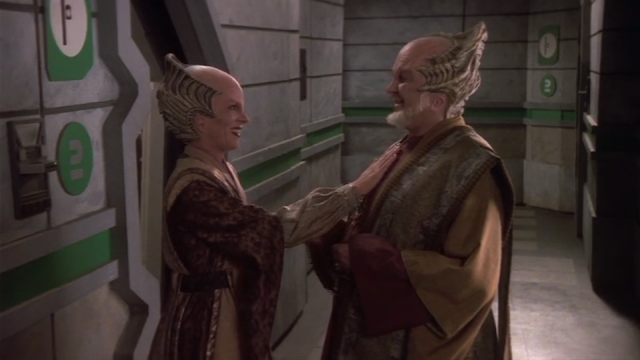 It is not entirely clear what Draal means by "going to the sea."  He refers to being of use among the stars, so he may simply mean going out into the unknown and finding some way to help whomever he finds along the way who is in need of some manner of assistance.  But I myself cannot help feeling he means he is going out to wander the void of the galaxy until death finds him.  "Going to the sea" summons thoughts of walking into the sea, which used to be a common means of committing suicide.  (So I assume; I'm admittedly basing this entirely upon On Her Majesty's Secret Service.) And certainly Delenn's reaction is that of a woman whose friend has just told her he's dying; she appears totally resigned, as though no options exist beyond what Draal is telling her.  This implies that indeed there ARE no options. 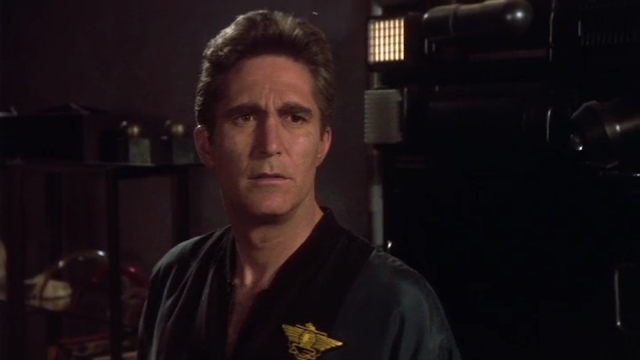 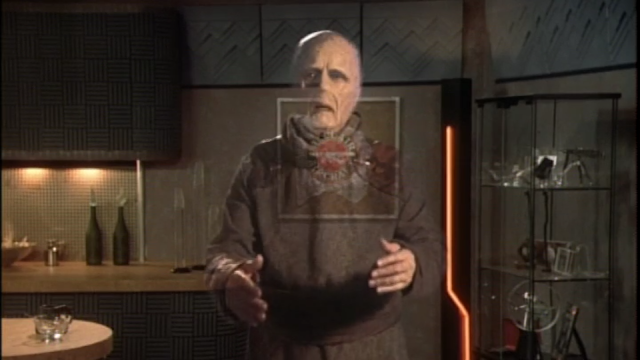 After contact with Mars is lost, Sinclair has an odd vision of a ghostly figure, who asks him for help.  The same figure appears to both Londo and Draal, and when Sinclair and Ivanova visit the interior of Epsilon III, they find the physical form of the "ghost": 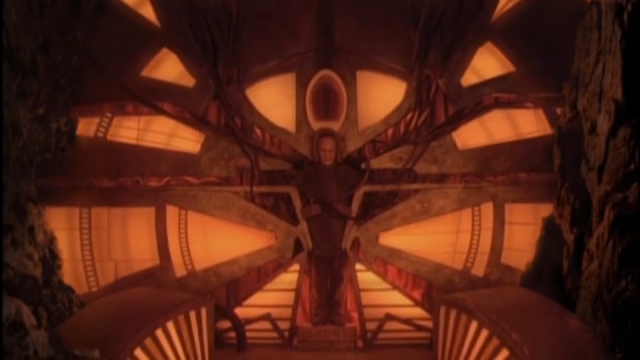 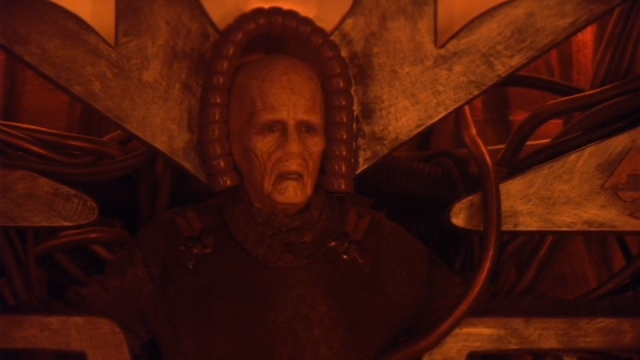 This is Varn, a centuries-old man who resides at the heart of the Great Machine beneath the surface of Epsilon III.  He has been its controller for a great time, and the machine has given him long life to facilitate his stewardship.  However, he is finally dying, and unless someone is found who can take his place in the machine, the failsafes which prevent its incredible technologies from falling into the wrong hands will cause the planet to split itself apart in utter destruction.  This, of course, will destroy Babylon 5 and its quarter of a million inhabitants.

Say, does anybody happen to know someone who is looking for a purpose?

It is telling that Varn appears to the people to whom he appears.  Draal, we know why.  And it is Draal in the end who does indeed take up Varn's old job.

But Sinclair and Londo?

Sinclair actually makes perfect sense.  He's been seeking a purpose all season, even when he was unaware he was doing so.  Delenn tells Garibaldi toward the end of episode two that she had to take Draal to the surface without allowing Sinclair to know she was doing so; if he knew, he'd have gone instead, and she couldn't permit that -- his destiny lies elsewhere.

Londo is by far the most surprising -- and compelling -- aspect of this scenario.  Londo, too, has been seeking a purpose all season; he's so far gone from believing purpose is even possible for him that he has been seeking it at the bottom of every glass, at the head of every gambling table, between the legs of every dancing girl.  He has occasionally sought it by provoking G'Kar, as well.  Unfortunately, he HAS found it already: in the power Mr. Morden has dangled in front of his face.  We will see the initial exertion of that power in the season one finale, and it will not be a pleasant sight to behold.  But at THIS moment, at THIS time, Londo is still right on the cusp of being saveable.  This is why Varn has appeared to him, perhaps.  How much could have changed if Londo, and not Draal, had been the one to enter the heart of the machine?

We will never know.  And for me, this covers the Londo element of the plot with a subtle layer of tragedy. 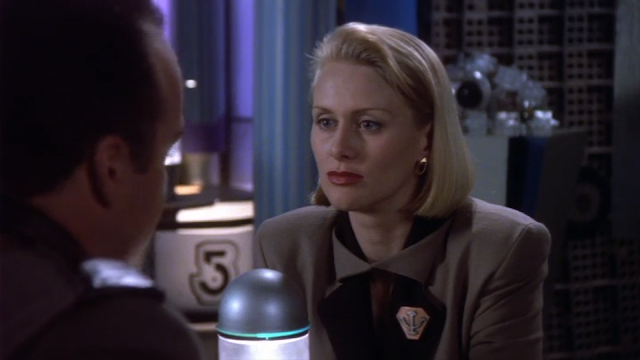 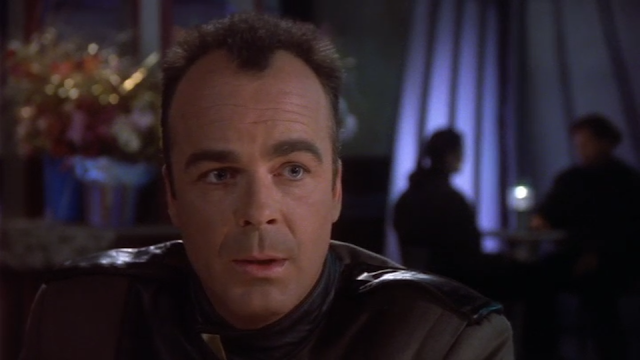 Garibaldi's plotline has some of that tragedy to it, as well.  "Tragedy" is the wrong word, actually; "melancholy" might be better.  He had been involved with a woman (Lise) on Mars before accepting the job on Babylon 5, and they broke up because she didn't want to move.  As soon as he finds out he doesn't know if she is alive or dead in the wake of the violence on Mars, Garibaldi knows he made a mistake leaving her.

He asks everyone he can think of -- including Talia -- for help in finding out anything about Lise, but no clear information comes until near the end of the second episode: Interestingly, Garibaldi earlier in episode two chased Londo and Delenn to the planet's interior, ostensibly to try to stop whatever they were doing.  (The identity of the people in the shuttle was unknown at that time; all that Garibaldi knew was that someone kidnapped Varn from Medlab.)  He tells Sinclair he's doing so because he has to do something.  In a way, Garibaldi is seeking his own purpose; Varn never appears to him, but despite this, Garibaldi does kind of become caught in the wake of this purpose-magnet on Epsilon III. 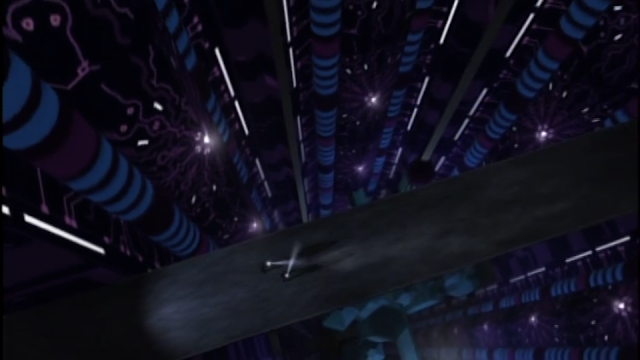 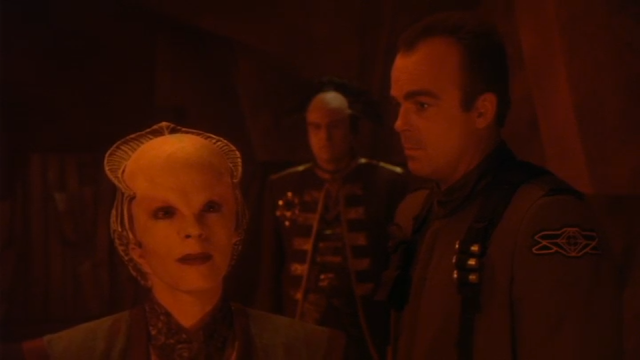 Draal drops a little bit of foreshadowing in his new capacity: Epsilon II itself has a destiny.  Its machines are not for the taking; their energies are for the future.

We'll see Draal again, eventually.  He'll be played by a different actor when he reappears: John Schuck, best known to me as the Klingon ambassador in the Star Trek movies.  He's loud and obnoxious, and kind of sucks; that's how I remember it, at least.  But whether he is or whether he isn't, that's a matter for some future post, farther down the line.

I leave you with this, a fairly amusing line reading from Michael O'Hare:

Next up: one of my favorite episodes of season one by far.
by Bryant Burnette at 5:41 AM