Tonight, on an underwhelming new episode: a holy man from Earth arrives on the station for a series of meetings with the ambassadors.  His goal: to find the Holy Grail.  I shit you not. 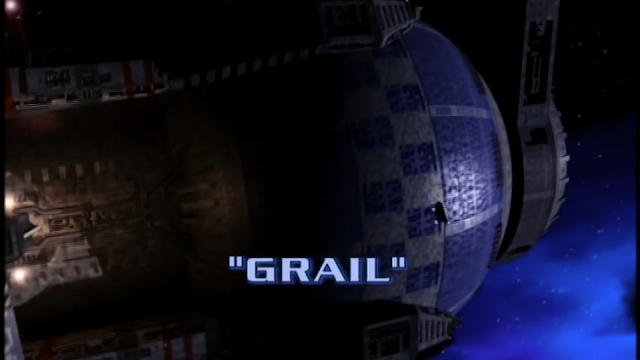 
Two dud episodes in a row, and when I say "dud" I mean shite.

We're under time constraints, so this is going to be a relatively brief post, much as was the case with "TKO" last time.  We'll use screencaps to get some conversation going.  Maybe.  Let's find out!


Sinclair seems confused by this; he's got no clue what Delenn is talking about.  But he never quite says so, and Delenn never indicates whether she is under the impression that Sinclair did know.  So this scene is a weird miscommunication OF a seeming miscommunication.  This is what happens when a weak screenplay, poor direction, and a low budget get together, y'all.


This episode introduces the notion of Downbelow and Lurkers.  (At least I think it does; if they've been referred to by those names prior to this, I missed it.)  Let's discuss that, I guess.

"Downbelow," essentially, is a section of the station that isn't in use; the idea, I guess, is that it's undeveloped (or semi-developed) space that could eventually be used for businesses, or guest quarters, or new diplomatic wings, etc.  So like an office building with an untenanted floor.  Does this make sense in a space-station context?  Sure, I guess so.  As much sense as aliens speaking English all the time, at least; meaning: I can live with it.

"Lurkers" are people who arrived on the station for one reason or another but then could not afford the fare to leave again.  So basically, homeless people.  I'm not sure the show ever persuades me that this sort of thing is likely.  I mean, sure, I can imagine it being a problem in theory.  But as soon as it became a problem, wouldn't it become a top priority and get solved?  The idea is that B5 is like a city in space, so a parallel is being drawn between the homelessness of, say, Los Angeles and this science-fictional homelessness.  But it's comparatively quite cheap to get to Los Angeles, so the parallel breaks down immediately.  In theory, it would be very possible to restrict entrance to Babylon 5; less so for any modern city.  Couldn't somebody begin requiring anyone arriving at Babylon 5 to have pre-booked some sort of return passage?  Alternatively, wouldn't there be some sort of diplomatic procedures for each world?  If it were citizens of Earth, for example, wouldn't there be some sort of legal repercussions for what amounts to large-scale loitering?
Maybe all of those questions have answers I'm simply not thinking of.  In any case, it's a sci-fi show; as I say frequently, I can more or less live with it.

This is the sort of dumb-ass humor that is common enough today, especially on smarty-pants cartoons like Rick and Morty or whatever.  It was less common in 1994, when it was basically just this show and the various Star Treks doing televised space opera.  You'd never get a joke like this on Star Trek: The Next Generation; a very funny show at times, that, but not in this sort of earthy way.  And yet, you just know that if we as a people do ever move out into exploring the galaxy, and if then we find out that alien abductions actually WERE a thing ... some dude with a mustache is most definitely going to find a way to sue somebody over it.  Count on that.

Sinclair is there, too, and he's not AS visibly dismissive of Gajic; but it's close.  He immediately pawns the seeker off on Garibaldi and goes about his business.  He's chased down by Delenn, who seems very disappointed in him.

I like this scene.  "Grail" is a terrible episode, but it has a few decent moments here and there.  The first-season relationship between Sinclair and Delenn has been played almost as a courtship, with only one half of the people involved aware it is even taking place.  I'm a big fan of that storyline, and it gets enough play here that I find myself unable to write the episode all the way off.

You may have noticed that when Gajic tells Thomas to see himself for what he is, this is not at all dissimilar to what Delenn has suggested Sinclair do.  There are potentially compelling connections between these two pairs of characters; the screenplay doesn't necessarily find them, alas.  But it's kind of a nice mantra to bear in mind for the series as a whole.

Anyways, Garibaldi saves the day by showing up and scragging the feeder.  In a sign of my feelings about this section of the episode, I literally can't remember -- despite watching it twice -- what happens to Deuce.  Does he get away?  Maybe.  Does he get killed or arrested?  Possible.

I do know that Aldous Gajic is mortally wounded, and in his last testament he declares Thomas to be his rightful heir, passing along the quest for the Grail to a new seeker.  Oof.  Sure, why not?


The episode ends with Sinclair, Ivanova, and Garibaldi watching Thomas's ship depart through the jumpgate; they wonder if there's anything to the "Babylon curse."  Sinclair notes that there's no boom, so all must be well.


We might at this moment reflect on the prophecy of Lady Ladira in "Signs and Portents," in which she had a vision -- several of them, actually -- of the station exploding in an enormous ball of fire.  I'd like to point out, however, that "Grail" was actually aired grossly out of order; it was the ninth episode to be produced, but the fifteenth to be broadcast.  So in actuality, this moment kind of ought to play as a mild foreshadowing of "Signs and Portents" (and of the actual event to which "Signs and Portents" itself is a foreshadowing).  One of my goals for this watchthrough is to construct a recommended viewing order; it's mostly very straightforward to do so (chronological by airdate), but I do think there are some places where deviations from the broadcast order make a lot of sense.
This is one, not only because of the foreshadowing I just mentioned, but also because the Londo we see here is palpably NOT the same man who has been through the events of "Signs and Portents."  His character arc from that to "Grail" doesn't work; and there's a reason for that, since it was made earlier.
Alternatively, one could very well just opt to skip this episode altogether.  I like the Sinclair and Delenn stuff enough that I advise against doing so; but it's close.
Bryant's rating:  * / *****
by Bryant Burnette at 10:47 PM